Seventeen lost pyramids are among the buildings identified in a new satellite survey of Egypt.

More than 1,000 tombs and 3,000 ancient settlements were also revealed by looking at infra-red images which show up underground buildings.

Initial excavations have already confirmed some of the findings, including two suspected pyramids.

The work has been pioneered at the University of Alabama at Birmingham by US Egyptologist Dr Sarah Parcak. 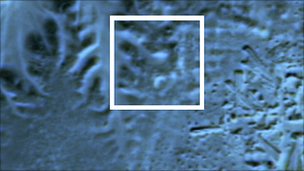 An infra-red satellite image shows a buried pyramid, located in the centre of the highlight box.

She says she was amazed at how much she and her team has found.

“We were very intensely doing this research for over a year. I could see the data as it was emerging, but for me the “Aha!” moment was when I could step back and look at everything that we’d found and I couldn’t believe we could locate so many sites all over Egypt.

“To excavate a pyramid is the dream of every archaeologist,” she said.

The team analysed images from satellites orbiting 700km above the earth, equipped with cameras so powerful they can pin-point objects less than 1m in diameter on the earth’s surface.

Infra-red imaging was used to highlight different materials under the surface.

Ancient Egyptians built their houses and structures out of mud brick, which is much denser than the soil that surrounds it, so the shapes of houses, temples and tombs can be seen.

“It just shows us how easy it is to underestimate both the size and scale of past human settlements,” says Dr Parcak.

And she believes there are more antiquities to be discovered:

“These are just the sites [close to] the surface. There are many thousands of additional sites that the Nile has covered over with silt. This is just the beginning of this kind of work.”

BBC cameras followed Dr Parcak on her “nervous” journey when she travelled to Egypt to see if excavations could back up what her technology could see under the surface.

In the BBC documentary Egypt’s Lost Cities, they visit an area of Saqqara (Sakkara) where the authorities were not initially interested in her findings.

But after being told by Dr Parcak that she had seen two potential pyramids, they made test excavations, and they now believe it is one of the most important archaeological sites in Egypt. 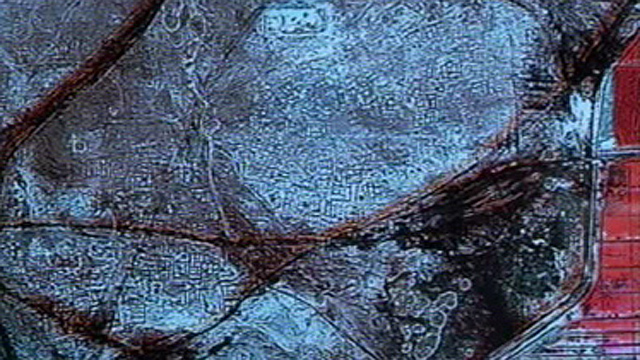 An infra-red satellite image reveals the city of Tanis

But Dr Parcak said the most exciting moment was visiting the excavations at Tanis.

The Egyptian authorities plan to use the technology to help – among other things – protect the country’s antiquities in the future.

During the recent revolution, looters accessed some well-known archaeological sites.

“We can tell from the imagery a tomb was looted from a particular period of time and we can alert Interpol to watch out for antiquities from that time that may be offered for sale.”

She also hopes the new technology will help engage young people in science and will be a major help for archaeologists around the world.

“It allows us to be more focused and selective in the work we do. Faced with a massive site, you don’t know where to start.

“It’s an important tool to focus where we’re excavating. It gives us a much bigger perspective on archaeological sites. We have to think bigger and that’s what the satellites allow us to do.”

Genome study of egyptian mummies from 1400 b.c. to 400 a.d. reveals they were more Turkish and European than African