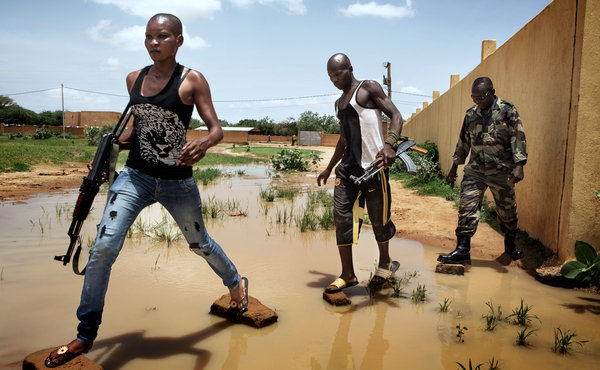 Militia members training in Mopti, Mali. The militias have something the Malian Army appears to lack: a fierce will to undo the jihadist conquest of northern Mali.

MOPTI, Mali — Hundreds of young men are stuffed into makeshift training camps near this provincial capital, arising at 4 a.m. for physical exercises and simulated hand-to-hand combat in preparation for the day when they can free their north Mali homeland from the radical Islamists whose harsh rule has driven tens of thousands of frightened, desperate civilians to flee the country.

The eager recruits have almost no weapons, little military instruction, and not much more than the hard ground to sleep on. They are definitely not in the army. A trainer in a scavenged uniform yells out, “Present, arms!” but there are no arms to present.

Yet the young men (and a few women) in these haphazard citizen militias, poised at the edge of the de facto front line with the Islamists, have something the regular Malian Army here appears to lack: a fierce will to undo the jihadist conquest of northern Mali that has alarmed governments across the world, spurred threats of a regional intervention force and imposed a repressive regimen of public beatings, whippings and even stonings on the local people.

Ever since the Malian Army overthrew the president in March, ending decades of democratic rule, the country has lost control over its vast desert north.

An array of fighters bent on enforcing a hard-edged brand of Islam and Shariah law — including members of Al Qaeda in the Islamic Maghreb — have seized the once tourist-friendly town of Timbuktu and other strategic sites, terrorizing or driving out any other claimants to power, destroying historic shrines and freely meting out punishment in the streets.

The Malian Army has been in seeming disarray, preoccupied with suppressing revolt within its own ranks and dissent within the citizenry in the south of the country. Soldiers who oppose the military junta have been tortured, journalists have been abducted and the military command seems more focused on punishing its rivals around the nation’s capital than on challenging the powerful Islamists up north.

Given its internal discord and reluctance to take on the Islamists, the army has been only too willing to embrace the fledgling militias, feeding them, providing instruction and even allowing them to shelter and train on abandoned state lands.

“These militias, they are very good,” said Col. Didier Dacko, who commands the Malian Army forces here. “We’re constantly exchanging with them. And we’re helping them with food, and teaching.”

Other West African nations have proposed sending in a regional force of 3,000 soldiers to help Mali recapture its territory. But the plan still needs to be approved by the United Nations Security Council, and Colonel Dacko said that any formal offensive, with or without international support, was still quite a way off. Indeed, the colonel said his men were no longer even going on patrols in contested areas.

By contrast, the militia leaders, some of them veterans of the guerrilla wars that have wracked this troubled West African nation since its inception, insist that their youthful charges, dirty tank-tops and torn jeans notwithstanding, are ready, if only they had the weapons.

“Time is wasting,” said Amadou Mallé, a former accountant and militia veteran who is director of training at the dusty encampment of the FLN, the Liberation Forces for the Northern Regions, one of three principal militia groups here.

“The enemy is implanting itself. We’re in a hurry, totally in a hurry,” said Mr. Mallé, wearing a uniform abandoned by the army after the fall of Timbuktu.

However unlikely their success may seem, given the few worn-looking rifles and light machine-guns in evidence, the militia leaders say they are tired of waiting for an army that shows no signs of budging.

“I’m going to use my very few means, to get out in front of the army,” said Ibrahim Issa Diallo, a former soldier who calls himself the military chief of the Ganda Iso, or “Sons of the Earth,” movement.

“Our goal is to liberate the north, whatever the price; we can’t abandon our relatives,” Mr. Diallo said. “The Islamists are marrying off our daughters.”

Outside, on a field belonging to the state and guarded by rifle-toting youth, hundreds of young men sat or sprawled on reed mats. There are 4,000 of them, Mr. Diallo said, all of them just waiting to take on the Islamists, he insisted.

The odds seem almost insurmountable. The Islamists routed the Malian Army in earlier clashes, yet at the FLN camp, only 10 light machine guns were set up on the ground: the sum total of the group’s weaponry. Fatoumata Touré, 23, from Islamist-held Niafunké, near Timbuktu, grasped one of them uncertainly. She had never held a rifle before coming to the camp.

Still, she said she would “never” accept the presence of the Ansar Dine Islamist group that has gripped the region. “It is our country,” she said. “Their customs are not ours.”

Well off the main road, the militia training camps are hidden from view near this bustling river port city, a major shipment point for relief supplies to the famished populations of the Islamist-occupied north. It is the last population center still held by the government before the dividing line.

But Mopti, population about 100,000, is calm. There is little in this shady administrative capital on the confluence of the Niger and Bani rivers — once the gateway to a prime tourist destination, Mali’s cliffside Dogon country — to suggest the magnitude of the nation’s crisis.

The Islamists are barely 45 minutes away, but the market is crowded with women buying and selling vegetables. In Timbuktu, 180 miles up the road, the Islamists have forbidden women from going to market unaccompanied, or from walking alone in the street. But plenty of women crowd Mopti’s streets, and housewives and their daughters do their washing on the river’s broad bank every day.

Outside Mopti’s great mud-brick mosque, the muezzin, Sekou Badal Touré, launched into a diatribe against the monument-destroying jihadists up the road. Still, “everything is peaceful here,” he said. “Here, we are not attached to the occupied territories.”

In Mopti, there are few army checkpoints and men in uniform are not frequently seen. On the streets, residents expressed confidence that the army would protect Mopti from the Islamists — despite its collapse during clashes in other towns.

A visiting mayor from behind the occupied zone expressed astonishment at the absence of an atmosphere of crisis in this amiably drowsy river town. “They don’t really realize their whole way of life is on the line,” said Mahamadou Almou Touré, the mayor of Bourem-Sidi Amar, now controlled by Ansar Dine.

One of the few signs of Mali’s nearby dismemberment here are the sacks of United Nations-supplied rice and crates of palm-oil destined for occupied Timbuktu, just up the river, being loaded onto the riverboats at the port. The river pilots go back and forth into the occupied territories frequently, carrying passengers and supplies, and they say that — rigorous checks for weapons aside — the Islamists do not attempt to interfere.

Colonel Dacko’s forces do not penetrate beyond the bucolic mud-brick village of Konna, just up the road. “For operational reasons, I don’t move from here,” the colonel said, looking out at the peaceful pastures, but declining to elaborate. “This is the limit of our forces, right here, absolutely.”

In retreat here since the fall of Gao at the end of March, Colonel Dacko said his men had not engaged with any of the Islamists here. The only beards in sight were found on the goats. He said “preparations” for a new offensive have been in motion ever since, and he alternately blamed bickering politicians in the capital, a lack of proper weaponry and his own men’s uncertain morale for not having taken on the enemy.

The mood among his men in Konna was jovial. One officer joked about an absence of beer. But the atmosphere was very different at the sweaty militia camps.

“Attack! Grab his knife!” an instructor at the FLN encampment yelled at two young men awkwardly jabbing each other with wooden sticks. At the adjoining Ganda Koy, or “Masters of the Earth,” camp, hundreds of young men squatted on the ground, eating a pittance of boiled rice out of a communal bowl before the next training session.

“It’s a goal we have here, to fight for our parents who are still stuck there,” said Attaher Ag Ibrahim, a 21-year-old student from Timbuktu who left when the Islamists began destroying the town’s venerable sacred tombs. “There are things happening there that we don’t like, at all,” he said.

Why Race Is Still a Problem for Mormons