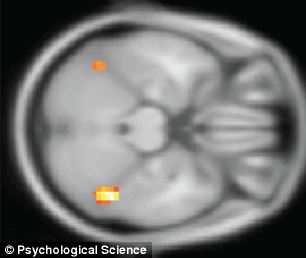 Tell-tale signs: This graphic highlights the facial-recognition area of the brain which researchers say can reveal whether subjects are racist

Brain scans could soon be used to detect whether or not people are racist, scientists say.
Researchers found that brain scans were able to pick up on differences in the way that people with implicit negative racial attitudes viewed black and white faces.
Racial stereotypes have previously been shown to have subtle and unintended consequences on how we treat members of different race groups.

But the new research published in Psychological Science, a journal of the Association for Psychological Science, shows race biases also increase differences in the brain’s representations of faces.
Psychologists Tobias Brosch of the University of Geneva in Switzerland and Eyal Bar-David and Elizabeth Phelps of New York University examined activity in the brain while participants looked at pictures of White and Black faces.

Afterwards, participants performed a task that assessed their unconscious or implicit expression of race attitudes.
By examining patterns of brain activity in the fusiform face area — a brain area involved in face perception — the researchers were able to predict the race of the person that the participant was viewing, but only for those participants with stronger, negative implicit race attitudes.
This, the researchers said, implies that people with stronger, negative implicit race attitudes may actually perceive black and white faces to look more different than others who held no such prejudice. 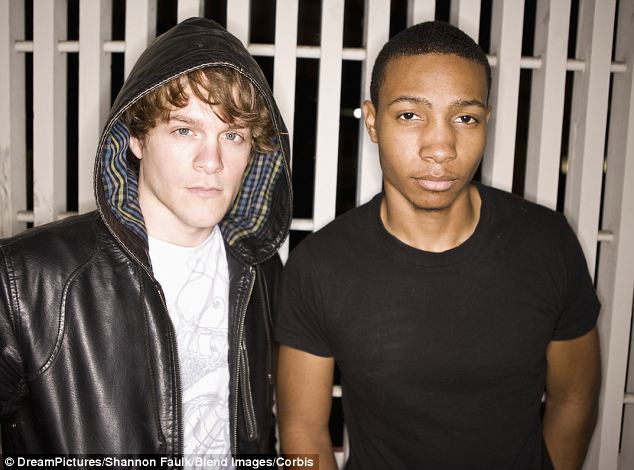 All in the mind: By examining patterns of brain activity in the fusiform face area researchers were able to predict the race of the person participants with stronger racial biases were viewing 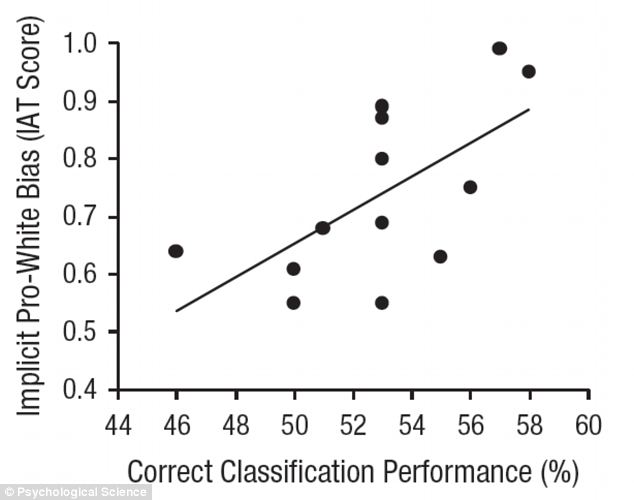 Striking: This graph from the paper shows the correlation between subjects implicit racism and the ability to detect whether they were looking at black or white faces from their brain scans

Clothing, it seems, can make us colour blind, because whether we perceive someone as ‘white’ or ‘black’ depends not just on skin tone – but also how smartly they are dressed, according to researchers.

In the study, conducted by a team of researchers from Tufts University, Stanford University and the University of California, participants, of various races, were shown a series of computerised faces, with different skin colours and clothing.

Some wore business attire and some working overalls – similar to what a caretaker might wear.

Not only were the faces dressed in suits more likely to be seen as white, and those in scruffier clothes black, but even when a white face was dressed down, the volunteers’ hand movements showed that they were at first instinctively drawn to labelling it black.

The scientists claimed that perception of race is shaped by prejudices that we already hold – and that racism runs deeper than we think.

Dr Brosch said that ‘these results suggest it may be possible to predict differences in implicit race bias at the individual level using brain data.’
However, Dr Phelps said further work would be needed before the technique could reliably detect whether people really were racists.
‘Although these findings may be of interest given the behavioural and societal implications of race bias, our ability to predict race bias based on brain data is relatively modest at this time,’ she said.
The new study further deepens the scientific understanding of the processes in the brain that lie behind the racist attitudes that some people hold.
Previous research by Dr Phelps has claimed that racism could be ‘hard wired’ into the brain, since the neural circuits which allow people to recognise ethnic groups overlap with others that drive emotional decisions.
Because of that, the researchers claimed, it’s possible that even people who believe themselves to be egalitarian could harbour racist attitudes without knowing.
The findings published last summer in the journal Nature Neuroscience could lead to fresh ways of thinking about unintended race-based attitudes and decisions.

They showed a network of brain regions called the the amygdala, dorsolateral prefrontal cortex and the anterior cingulate cortex are important in the unintentional, implicit expression of racial attitudes.

The researchers said the brain areas themselves – as well as the functional connectivity among them – are critical for this processing.
Read more: http://www.dailymail.co.uk/sciencetech/article-2264500/How-scientists-use-brain-scans-detect-racist.html#ixzz2IOXYFend

Italy's first black minister had bananas thrown at her: mannequins stained with fake blood dumped outside of speaking location