A newly discovered gene could hold the key to treating and potentially controlling chronic infections such as HIV, hepatitis and tuberculosis.
The gene, called Arih2, is essential for embryo survival. Now scientists have found it controls the function of the immune system – making critical decisions about whether to switch on the immune response to an infection.
It could help in the development of treatments for infections that ‘overwhelm’ the immune system like HIV as well as conditions that cause chronic inflammation such as rheumatoid arthritis. 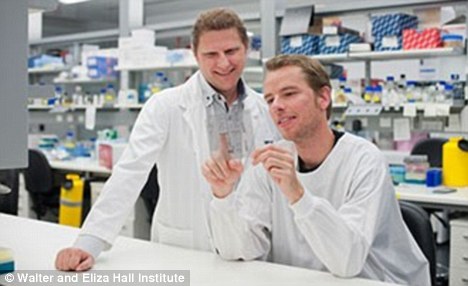 The gene was discovered in dendritic cells by a team from the Walter and Eliza Hall Institute in Australia. These cells act as an early warning system raising the alarm if they detect foreign invaders.

‘Arih2 is responsible for the most fundamental and important decision that the immune system has to make – whether the immune response should be initiated and progressed or whether it should be switched off to avoid the development of chronic inflammation or autoimmunity,’ research leader Dr Marc Pellegrini, said.

‘If the wrong decision is made, the organism will either succumb to the infection, or succumb to autoimmunity.’

Dr Pellegrini said although our immune system works well against many infections, some organisms have developed mechanisms to evade or counteract the immune system, allowing them to persist in the body.

‘During evolution, some organisms have evolved ways of exhausting our immune system to the point where the immune system just switches off, and this is what happens in HIV, hepatitis B and tuberculosis,’ he said.

‘These organisms counter the immune response – exhausting T cells which are stimulated over and over again by the infection and becoming exhausted or paralysed.

‘With this current discovery, what we should be able to do is circumvent these mechanisms and reinvigorate the immune response temporarily to boost the immune system and help clear these infections.’
Dr Greg Ebert said the research team was now looking at the effect on the immune response of switching off Arih2 for short periods of time during chronic infections.

‘We are investigating how manipulating Arih2 and associated pathways promotes immunity in chronic overwhelming infections, where we know the immune response is inadequate,’ he said. 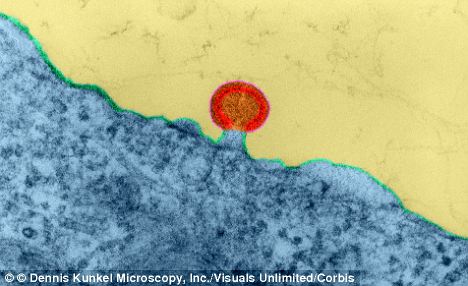 HIV budding in human lymphatic tissue. The new gene discovery could pave the way for new treatments for the precursor to AIDS

He said Arih2 had significant promise as a drug target.

‘Arih2 has a unique structure, which we believe make it an excellent target for a therapeutic drug, one that is unlikely to affect other proteins and cause unwanted side-effects,’ Dr Ebert said.

‘Because Arih2 is critical for survival, we now need to look at the effect of switching off the gene for short periods of time, to see if there is a window of opportunity for promoting the immune response to clear the infection without unwanted or collateral damage or autoimmunity.’
Dr Pellegrini said they were very excited about their discovery but it would take many years to translate the discovery to a drug that could be used in humans.
However, he added: ‘It is probably one of the few genes and pathways that is very targetable and could lead to a drug very quickly.’
The study was supported by the National Health and Medical Research Council of Australia and the Victorian Government.
Read more: http://www.dailymail.co.uk/health/article-2239211/Gene-discovered-decides-switch-immune-control-HIV.html#ixzz2DSEgKtaw

Medical Apartheid: The Dark History of Medical Experimentation on Black Americans from Colonial Times to the Present