By DAMIEN GAYLE
PUBLISHED: 08:28 EST, 24 January 2013 | UPDATED: 09:39 EST, 24 January 2013
Humans living 40,000 years ago in the area around Beijing were already genetically distinct from the ancestors of modern Europeans, DNA analysis has found.
An international team of researchers sequenced DNA that had been extracted from the leg of an early modern human from Tianyuan Cave near to the Chinese capital.
Analyses showed that the Tianyuan human shared a common origin with the ancestors of many present-day Asians and Native Americans – but had already diverged genetically from ancient Europeans. 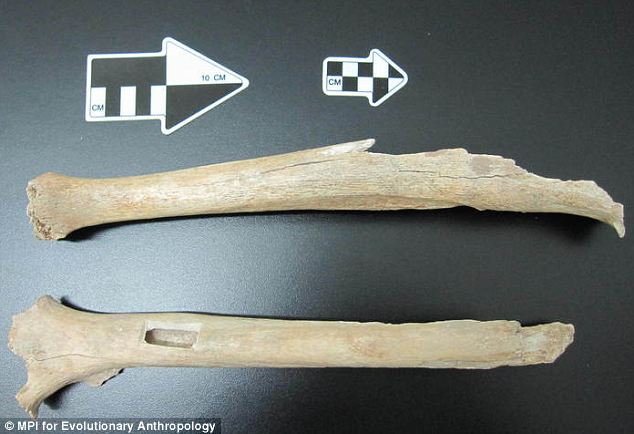 The leg of the early modern human from Tianyuan Cave that was used for the genetic analysis: DNA sequencing showed a genetic profile already distinct from that of the ancestors of Europeans

The researchers also found that the proportion of Neanderthal and Denisovan DNA in the early modern human was no higher than in the present day population of this region.
Researchers with the Max Planck Institute for Evolutionary Anthropology in Leipzig, Germany, took nuclear and mitochondrial DNA from a 40,000 year old leg bone unearthed at the Tianyuan Cave in 2003.

hey used newly developed techniques to enable them to identify ancient genetic material from an archaeological find even when large quantities of DNA from soil bacteria are present.

The researchers then reconstructed a genetic profile of the leg’s owner.
Study leader Svante Pääbo said: ‘This individual lived during an important evolutionary transition when early modern humans, who shared certain features with earlier forms such as Neanderthals, were replacing Neanderthals and Denisovans.’
The genetic profile revealed that this early modern human was related to the ancestors of many present-day Asians and Native Americans but had already diverged genetically from the ancestors of present-day Europeans.
In addition, the Tianyuan individual did not carry a larger proportion of Neanderthal or Denisovan DNA than present-day people in the region. 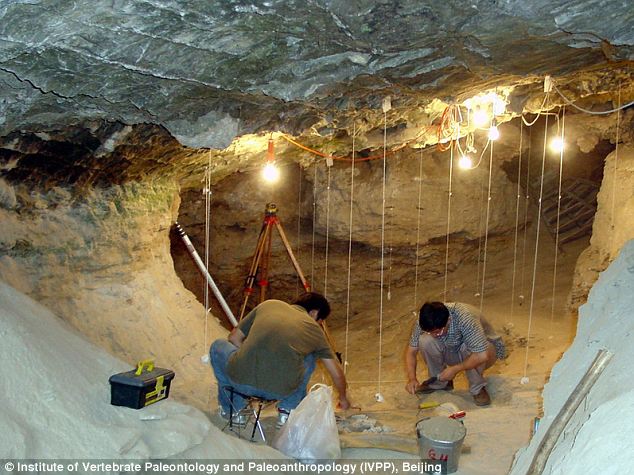 Study: Researchers carrying out excavation works at Tianyuan, where the leg bones were unearthed in 2003

‘More analyses of additional early modern humans across Eurasia will further refine our understanding of when and how modern humans spread across Europe and Asia,’ said Professor Pääbo.
Parts of the work were carried out in a new laboratory jointly run by the Max Planck Society and the Chinese Academy of Sciences in Beijing.
The study’s findings have been published online in the journal Proceedings of the National Academy of Sciences.
Read more: http://www.dailymail.co.uk/sciencetech/article-2267586/Ancient-Chinese-genetically-distinct-Westerners-far-40-000-years-ago-DNA-analysis-shows.html#ixzz2IxDiRsNi