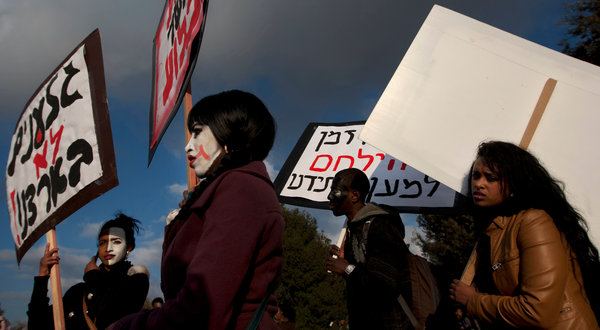 Near the prime minister’s residence, Ethiopian-Israelis, some with painted faces, protested what they said was discrimination.

JERUSALEM — Yetmwork Makurya, 35, had tears in her eyes as she spoke of her attachment to Israel. When she arrived as a teenager in 1991 on a secret overnight airlift from Ethiopia, she said, “Jerusalem and the land of Israel was my dream.”

Yet over the past three months Ms. Makurya has spent much of her time with an angry new generation of Ethiopian-Israeli activists on the sidewalk near the prime minister’s residence in central Jerusalem, protesting against racism and discrimination.

“Here,” said Ms. Makurya, a mother of three, “everything is determined by the color of my skin.”

The protests were fueled by a number of ugly episodes that grabbed the attention of the local news media.

In the southern town of Kiryat Malachi, the residents of four buildings signed an agreement not to rent or sell apartments to Ethiopians. Some told visiting television crews that the Ethiopians ate strange food and smelled bad. Ms. Makurya’s young children were kicked off a public bus in Jerusalem by an abusive driver in April. The driver accused one of them of not paying for a ticket though the youngest, a 4-year-old girl, was entitled to ride for free. The bus company said it had suspended the driver, and the police are investigating.

For many Israelis, the idea that Jews could be racist toward other Jews is anathema. The 1991 airlift, known as Operation Solomon, brought 14,000 Ethiopian Jews to Israel within 36 hours and was greeted at the time with great celebration.

Natan Sharansky, the human rights activist who spent years in Soviet prisons before arriving in Israel, joined one of the flights.

In an interview on the 20th anniversary of the airlift last year, Mr. Sharansky, by then the chairman of the quasi-governmental Jewish Agency that deals with immigration, said with pride, “Black, white — there is no difference in the ingathering of exiles.”

As the dazed new immigrants descended the plane steps, many kissed the tarmac. Operation Solomon followed an earlier, smaller wave of clandestine immigration in the 1980s, involving a treacherous trek from Ethiopia to camps on the Sudanese border. Thousands perished along the way; Israel recently began honoring them with official memorials.

Armies of volunteers and organizations, and a plethora of programs largely financed by American Jews, helped ease the transition of the Ethiopians from the rural life to modern Israeli society. The government has also allocated significant resources to help them.

But a second generation of young, educated adults who have grown up in Israel say they are still struggling to be accepted as Israeli, and are distancing themselves from the grateful passivity of their parents.

“For our parents it was a privilege to come to Israel, so they didn’t complain,” said Yamluck Waggow Ichasheman, 31. “Longings for Zion brought them here.”

They bristle at what they see as a patronizing attitude. Many Israelis, said Ms. Makurya, who works as a counselor, convey the message, “ ‘Say thank you that you’re here, we gave you food.’ ” She added, “Some here say there is no such thing as a black Jew.”

The immigrants first exploded in rage when reports emerged in 1996 that Israel was secretly dumping blood donated by Ethiopians for fear that it was contaminated with H.I.V.

Immigration experts here say that the Ethiopian-Israelis do face some racism and prejudice, but that racism is not the main problem blocking their progress. Earlier immigrants from other countries like Morocco and Yemen also had a long, rough entry into Israeli society.

“I have always said that integration takes a generation,” said Arnon Mantver, the director of JDC-Israel, the Israeli branch of the American Jewish Joint Distribution Committee, which has worked intensively with the Ethiopian community. Given the formidable challenges facing the Ethiopians, he said, “Perhaps it takes longer.”

Unlike the Russian immigrants of the early 1990s, who came as doctors, engineers and musicians, many of the Ethiopians had never been to school.

Tamar Lilay, 31, said she did not know how to hold a pencil when she first landed. She now has a degree from Haifa University in special education and runs a program pioneered by JDC-Israel for the empowerment of Ethiopian women in Gedera, a town south of Tel Aviv.

There was also culture shock. Ms. Lilay recalled being driven from the airport to a hotel in Eilat, a southern resort full of women in bikinis. “My mother only cried,” Ms. Lilay said. “We came from a village, a modest life. All our stories were about holy Jerusalem, not Eilat. We were not prepared for that.”

The high employment rate of Ethiopian women, more than 60 percent, is considered one of the more successful measures of integration.

But many of the women, and men, are employed in low-grade jobs, often as contract workers with little hope of advancement. Ethiopian Israelis are concentrated in poor areas; they could afford only cheap housing with special mortgages granted by the government. As a consequence, some kindergartens and schools became almost exclusively Ethiopian, leading to accusations of ghettoization and separate systems of education.

The Orthodox-dominated religious establishment has been less than accommodating, while the Kessim, traditional Ethiopian Jewish spiritual leaders, complain that they have lost their stature.

“I left my authority as a parent and an educator at the airport,” said Kess Eyasu Barhane, 81, as he sat under a colorful umbrella at a recent demonstration outside the prime minister’s residence. Immigration to Israel “was like entering a sort of paradise,” he said, speaking in Amharic through an interpreter, “but I hardly had time to enjoy the happiness before being left with a bad taste.”

Education gaps remain, and there are high rates of alcoholism and truancy among Ethiopian-Israeli youth. The rates of suicide, divorce and domestic violence are also higher than in the rest of Israeli society. A recent parliamentary report said that 30 percent of the killings of women by their husbands occur within the Ethiopian community, though the 130,000 or so Ethiopians make up less than 2 percent of Israel’s population.

The move to Israel caused an “earthquake that shook the foundations of the family structure,” said Malka Shabtay, an anthropologist at the Ruppin Academic Center’s Institute for Immigration and Social Integration, in Israel.

But Dr. Shabtay said that the recent protests were a positive development that could result in the kind of unified community leadership that had so far been lacking.

Another source of contention has been the slow trickle of immigration of the Falash Mura, Ethiopians of Jewish descent who converted to Christianity. Thousands are still waiting in camps in Ethiopia.

“They are our flesh, they are part of us,” Mr. Netanyahu told his cabinet, “and we will not tolerate any displays of racism against them.”

A protest tent came down at the end of May, by court order, but the activists have remained on the sidewalk under a large umbrella.

Alemitu Ferede, 30, a law school graduate from Ashkelon who had been behind the effort to set up the protest tent, said the government offer was inadequate. “They decided for us, not with us,” she said. “The time has come to fight to be Israelis.”