By LARISA BROWN
PUBLISHED: 15:20 EST, 31 January 2013 | UPDATED: 15:28 EST, 31 January 2013
Five years ago Peggielene Bartels was working as a secretary just outside Washington D.C.
She lived in a humble one-bedroom apartment and when she was not typing letters and answering phone calls, she spent her time cooking and completing household chores.
Then late one night in 2008 she was awoken by a phone call at 4 o’clock in the morning. 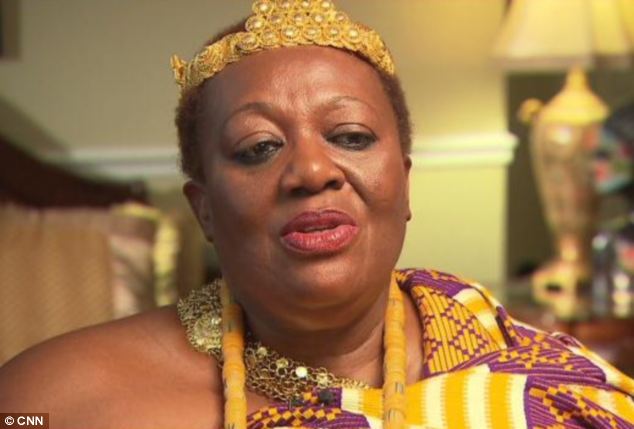 Royalty: Peggielene Bartels became king of Otuam over night after village elders chose her despite the fact she was in the U.S. working as a secretary 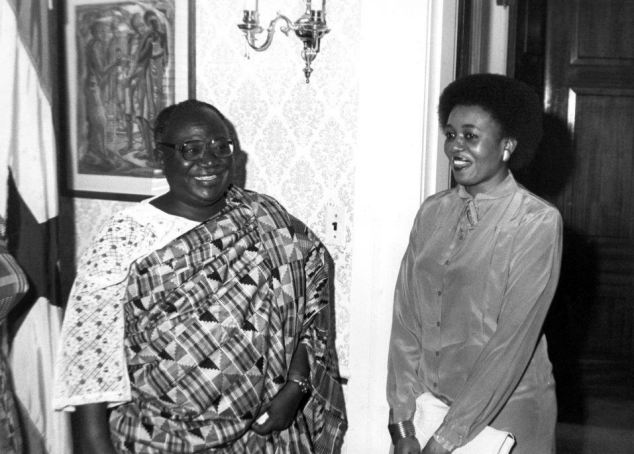 Humble beginnings: Peggielene, right, working as a young secretary around 1980 with a former Ghanaian ambassador to Washington 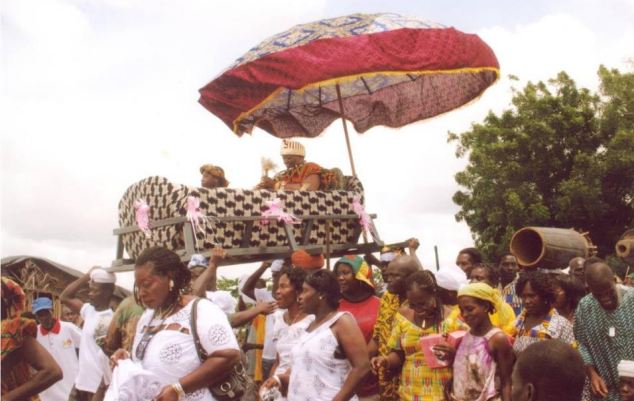 Reigning monarch: The new king is lifted high in a royal palanquin so all the people can see her. A royal red umbrella is lifted above her head to protect her from the sun

On the other end of the line was her cousin, from Otuam, a small fishing village on the coast of Ghana.
And in that brief conversation on a warm summer’s night, the 55-year-old was congratulated on being the new king of Otuam.

‘I said, “listen, it’s 4 o’clock in the morning in the U.S., I am very tired, let me sleep,” remembers Bartels. ‘I thought he was trying to really play games with me.’
The previous king of the African village, who was Bartel’s uncle, has just passed away.
The village elders, who remembered Bartles from the times she had visited with her mother, had taken a liking to her and decided to anoint her as their new ruler.
Bartels took it as her calling and decided to accept the kingship, becoming the first female king of Otuam, reigning over approximately 7,000 people. 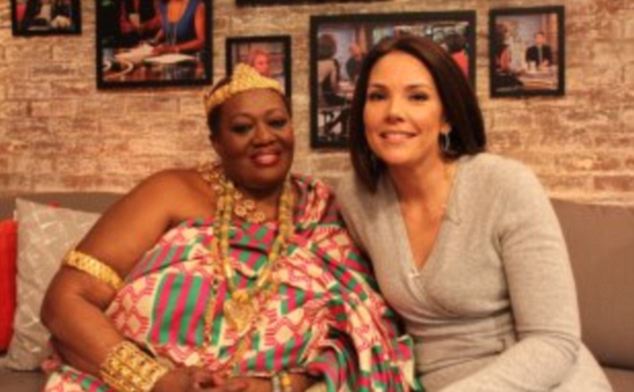 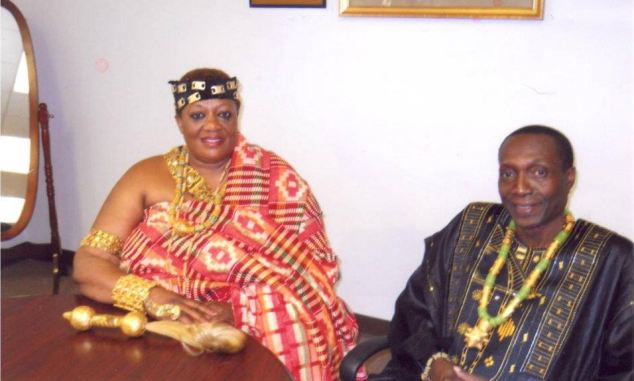 King Peggy was no longer the same ordinary administrative assistant who had worked for nearly three decades at the Ghanian Embassy in the United States.
Bartels, who was interviewed by CNN, said: ‘It never ever occurred to me [that I’d be Otuam’s king].
‘I realized that on this earth, we all have a calling. We have to be ready to accept it because helping my people has really helped me a lot to know that I can really touch their lives.’
Bartels, who has been living in the U.S since her early 20s, was born in Takoradi, southern Ghana, in 1953. 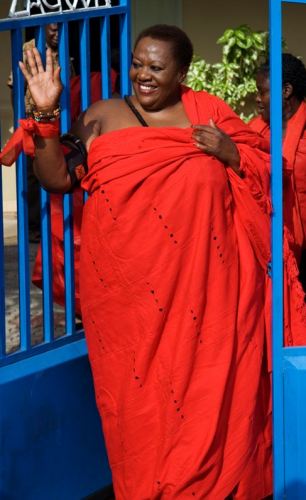 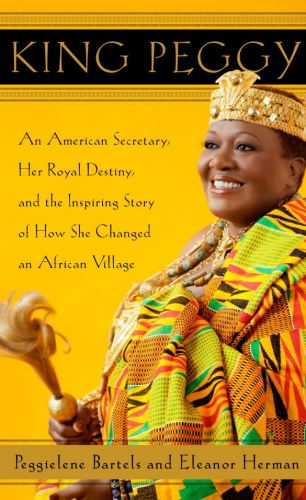 King Peggy waves to her people as she leaves for her uncle’s funeral who was the past King, left, and her book, right, which documents her extraordinary life 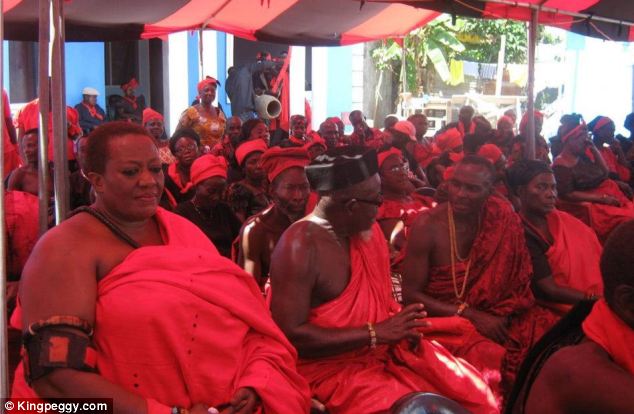 She studied in England before moving to the United States, where she became an American citizen in 1997.
But after inheriting the throne, Bartels still works at the Ghanian Embassy in the U.S. And for a month every year, she uses all her holiday to spend a month in Otuam.
For 11 months of the year she types letters, answers phone calls and books appointments. In her small apartment she cooks, does the laundry, makes her own bed and drives herself.

For the one remaining month of the year she is called king (the traditional title of Otuam’s ruler), and stands outs as a gold crown-wearing scepter-holding king who lives in a grand palace.
Villagers bow to her when they see her and she is often addressed to as ‘Nana’ – an honorary title given to royalty and women with grandchildren. 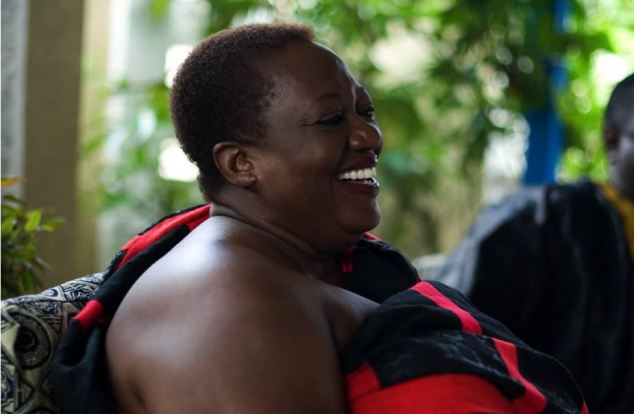 King Peggy writes in her book: ‘This picture was taken on the last day of the three-day royal funeral. I was laughing, bidding another king farewell and very happy that I had done my duty to my uncle. Or had I?’ 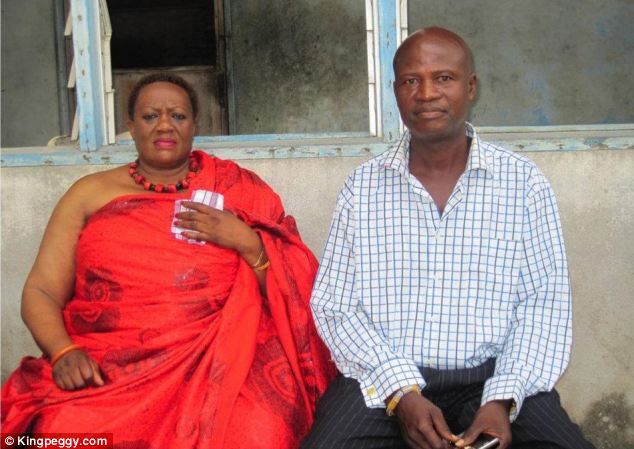 Peggy and Nana Kwesi, who rebuilt the royal palace and helps her to rule the community when she is in the U.S.

She told CNN: ‘When I am back home they see me as their king and they want to pamper me.

‘They have to cook for me, they have to carry me around and they have to protect me from people. They want to do everything for me which I usually refuse … Sometimes I say to them “please, don’t bow.”
Bartels says life in the African fishing village is not all about luxury, especially in an impoverished community like Otuam. 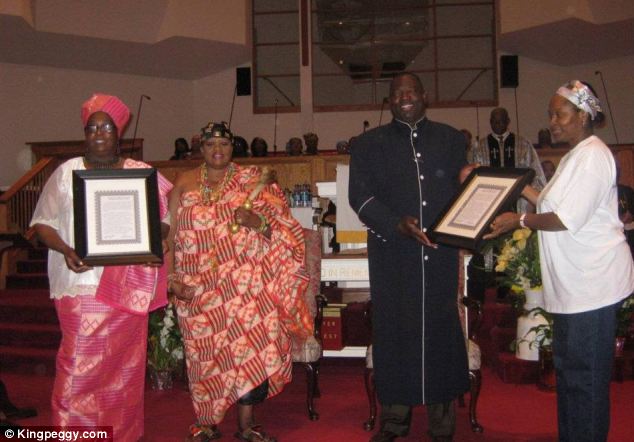 King Peggy writes: ‘Here I am with the pastor of Shiloh Baptist Church, Be Louis Colleton, at the Covenant Ceremony in May 2010. Happy Day!’

When she is there – and even when she is not – she works to improve the lives of her people.
She adds: ‘To be a king in an African village or some places like this, it’s not like European queens where everything is on a silver platter for them.
‘I have to really work hard to help my people. I have to give myself to people to better their lives.’
Her successes so far include helping poor families pay school fees and installing computers in classrooms. 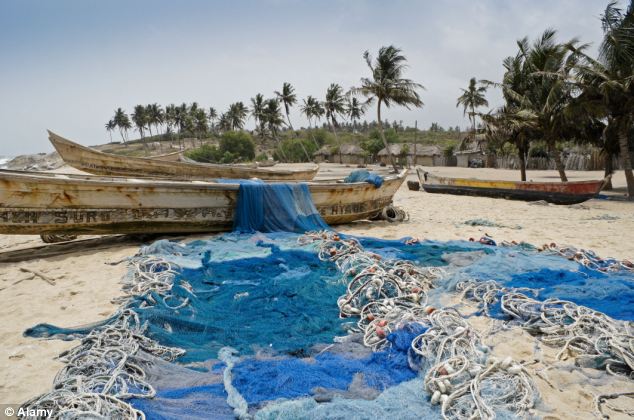 Otuam, a small fishing village on the coast of Ghana

With the help of fellow Americans she has also provided the village with its first ambulance, as well as access to clean, running water.

When she is not in Ghana, her royal duties do not stop, for she wakes up at 1am every morning to be informed of events in the community.

King Penny’s tale has been documented in a book written by her and author Eleanor Herman and is to be made into a film after Hollywood star Will Smith bought the rights to the book.
Queen Latifah is to play King Penny.
Read more: http://www.dailymail.co.uk/news/article-2271449/The-American-secretary-king-A-womans-journey-royalty.html#ixzz2Jb5dtKmp