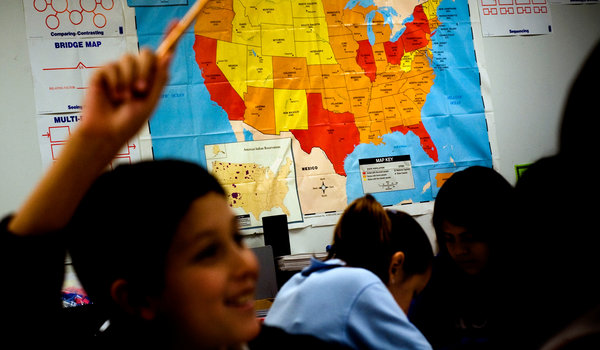 Students at F. M. Gilbert Elementary School in Irving, Tex. Segregation of Latino students is most pronounced in California, New York and Texas.

The United States is increasingly a multiracial society, with white students accounting for just over half of all students in public schools, down from four-fifths in 1970.

Yet whites are still largely concentrated in schools with other whites, leaving the largest minority groups — black and Latino students — isolated in classrooms, according to a new analysis of Department of Education data.

The report showed that segregation is not limited to race: blacks and Latinos are twice as likely as white or Asian students to attend schools with a substantial majority of poor children.

Across the country, 43 percent of Latinos and 38 percent of blacks attend schools where fewer than 10 percent of their classmates are white, according to the report, released on Wednesday by the Civil Rights Project at the University of California, Los Angeles.

And more than one in seven black and Latino students attend schools where fewer than 1 percent of their classmates are white, according to the group’s analysis of enrollment data from 2009-2010, the latest year for which federal statistics are available.

Segregation of Latino students is most pronounced in California, New York and Texas. The most segregated cities for blacks include Atlanta, Chicago, Detroit, Houston, Philadelphia and Washington.

“Extreme segregation is becoming more common,” said Gary Orfield, an author of the report who is co-director of the Civil Rights Project.

The overlap between schools with high minority populations and those with high levels of poverty was significant. According to the report, the typical black or Latino student attends a school where almost two out of every three classmates come from low-income families. Mr. Orfield said that schools with mostly minority and poor students were likely to have fewer resources, less assertive parent groups and less experienced teachers.

The issue of segregation hovers over many discussions about the future of education.

Some education advocates say that policies being introduced across the nation about how teachers should granted tenure or fired as well as how they should be evaluated could inadvertently increase segregation.

Teacher evaluations that are based on student test scores, for example, could have unintended consequences, said Rucker C. Johnson, an associate professor of public policy at the University of California, Berkeley.

Teachers would be reluctant to take assignments in high-poverty, high-minority communities, he said. “And you’re going to be at risk of being blamed for not increasing test scores as quickly as might be experienced in a suburban, more affluent area,” Mr. Johnson said.

The report’s authors criticized the Obama administration as failing to pursue integration policies, and argued that its support of charter schools was helping create “the most segregated sector of schools for black students.”

Daren Briscoe, a spokesman for the Department of Education, said the Obama administration had taken “historic steps to transform the schools that for too long have shortchanged the full potential of our young people and have been unsuccessful in providing the necessary resources and protections for students most at risk.”

Other advocates for minorities said charter schools had benefited their communities, even if they were not racially integrated.

Raul Gonzalez, director of legislative affairs and education policy at the National Council of La Raza, a Latino advocacy group, said that black and Hispanic parents did not necessarily say “I want my kid to be in an integrated setting.” Instead, he said, “they’re going to say I want my kid’s school to do better than what it’s doing.”

Todd Ziebarth, vice president of the National Alliance of Public Charter Schools, said he supported more money for transportation to charter schools and encouraging them to pursue more diversity. But, he said, “if a school is relatively homogeneous but is performing really well, we should be celebrating that school, not denigrating it.”

Critics of segregation in traditional public schools and charters said that there was more to education than pure academics.

Court rules that 32-year-old man's sex with 17-year-old was legal, but pictures of it were not

DC Teen Killing Believed To Be Over Pair of Shoes