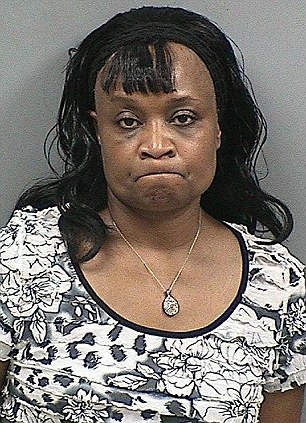 Prophet? Sandra Lee Allen told a friend that she needed tens of thousands of dollars so the friend could ‘get right with the Lord’

A Washington state woman claiming to be a prophet of God bilked a friend out of her $100,000 life savings in a single month by claiming her ancestor had committed a murder and that she had to ‘get right with the Lord,’ police say.
Sandra Lee Allen, 54, claimed that Elizabeth Hughes needed to catch up on ten years of missed tithing and pay for the next ten years, as well. She claimed that God had told her an earthquake was coming and the Mrs Hughes’ son would die if she did not make up for the sins of her forefathers, according to a report from officers in Federal Way, Washington.

Allen claimed she was using the money to build her ministry and an outreach center. Instead, she bought a Jaguar X-Type luxury car and spent nearly $32,000 in a month on shopping sprees to Nordstrom department store, Coach purses and Best Buy.
Mrs Hughes said she emptied out her husband’s retirement accounts, savings and borrowed thousands from her daughter to give Allen the money she demanded.

She began by giving Allen cashiers checks. Later, Allen told her ‘she needed to stop paying with cashiers checks and that God wanted only cash,’ a police report says.
Mrs Hughes estimated that from June 2012, when she met Allen, and July 2012, she gave Allen $93,000.

Mrs Hughes never told her husband – the family’s sole breadwinner – about the money, knowing he wouldn’t consent to her giving it to Allen. And Allen, for her part, allegedly encouraged Mrs Hughes to go behind his back because ‘he didn’t walk with God,’ a police report said.

Police found several other people who had heard Allen proclaim she was a prophet of god, as well.

Mrs Hughes said Allen made her fear for her family safety because Allen continued to make dire predictions of disaster that would befall her children.

Perks of the job? Allen bought herself a 2002 Jaguard X-Type with some of the money that she received from Mrs Hughes

According to police, Allen told Mrs Hughes that the money would make up for a murder one of Mrs Hughes’ ancestors committed.

Allen also claimed to be an accomplished gospel singer with a record deal, as well as a having a close connection with televangelist Jaunita Bynum.

Police found both of those claims to be false.
Allen told police that Mrs Hughes had freely given her money and she had never threatened her family.