By Bob Harig | ESPN.com       Updated: May 22, 2013, 9:50 AM ET
The verbal sparring between Sergio Garcia and Tiger Woods continued Wednesday after Woods tweeted back at Garcia in response to comments made by Garcia that could be perceived as a racial reference aimed at the world’s No. 1 player.
On Wednesday morning, Tiger tweeted this: “The comment that was made wasn’t silly. It was wrong, hurtful and clearly inappropriate.
“I’m confident that there is real regret that the remark was made.
“The Players ended nearly two weeks ago and it’s long past time to move on and talk about golf.”
Garcia, who later issued an apology, took issue with Woods for what he viewed as a breach of golf course etiquette during the third round of The Players Championship two weeks ago, was asked in jest at a European Tour function if he would be inviting Woods to dinner during next month’s U.S. Open. 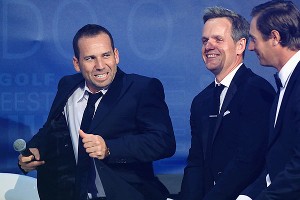 Richard Heathcote/Getty ImagesSergio Garcia (left) was in a joking mood at the European Tour awards dinner Tuesday night in England, where he shared the stage with Luke Donald and Nicolas Colsaerts, then later made a controversial remark about Tiger Woods.

“We’ll have him ’round every night,” Garcia said, according to multiple media reports. “We will serve fried chicken.”
“Fried chicken” references are associated with racial stereotypes of African-Americans. A similar comment got Fuzzy Zoeller in trouble following the 1997 Masters, when he quipped that fried chicken would be served at the following year’s champions’ dinner, which Woods would host as defending champion.
According to media reports, Garcia left the European Tour awards dinner Tuesday night at the BMW PGA Championship in Virginia Water, England, before he could be questioned. He later issued a statement through the European Tour.
“I apologize for any offense that may have been caused by my comment on stage during the European Tour Players’ Awards dinner,” Garcia said. “I answered a question that was clearly made towards me as a joke with a silly remark, but in no way was the comment meant in a racist manner.”

Garcia addressed the media on Wednesday in England and apologized again, saying “my answer was totally stupid and out of place. I feel sick about it.”
The back-and-forth between Garcia and Woods has continued long after the conclusion of the Players, where Woods won his fourth tournament of the year a day after Garcia complained about being distracted on the second hole by the world’s top-ranked player, who was his playing partner that round.
Their accounts of what happened later were disputed by different marshals on the hole, and neither player has backed down. On Monday, at a media day for the AT&T National in Washington, D.C., Woods was asked if he would reach out to Garcia to clear the air. Woods drew laughter when he simply said: “No.”
Earlier Tuesday, Garcia was again asked about Woods in a news conference at Wentworth, host of the BMW PGA.
“I mean, you can’t like everybody,” Garcia said. “I think that there’s people that you connect with and there’s people that you don’t. You know, it’s pretty much as simple as that. I think that he doesn’t need me in his life, I don’t need him in mine, and let’s move on and keep doing what we’re doing.”
Asked when his issues with Woods began, Garcia said: “A while back. It’s never really been like a true connection like I would have maybe with Luke Donald or Lee Westwood or Adam Scott or some of the other guys that I get along with well.”

Reconstruction of a 7000 year old dark skinned woman from Sweden