Mark Townsend, home affairs editor    The Observer, Saturday 21 September 2013 18.51 EDT
Three more women have come forward to corroborate allegations of inappropriate sexual contact between inmates and staff at Yarl’s Wood immigration removal centre, including claims that such behaviour is still going on.
Their accounts support allegations made by a former detainee in theObserver on Septhember 15 and challenge the assertion made by Serco, the private-sector company that runs Yarl’s Wood, that alleged sexual contact between women and staff is not widespread.
The women – one who is currently inside the centre and another who left in July – claim to have witnessed guards touching women inappropriately, and allege that guards gave detainees the impression they could help with immigration cases in return for sexual contact, and breached company policy by entering women’s rooms at night.
Serco said: “Sexual contact between residents and staff is always completely unacceptable. We categorically refute the suggestion that there is a widespread or endemic problem of such behaviour at Yarl’s Wood, or that it is in any way tolerated or overlooked.”
The latest allegations go back almost five years. In one incident – not acknowledged publicly by Serco until now – it has emerged that a male staff member was dismissed for “inappropriate behaviour with a resident” inside Yarl’s Wood four years ago after an incident caught on CCTV. 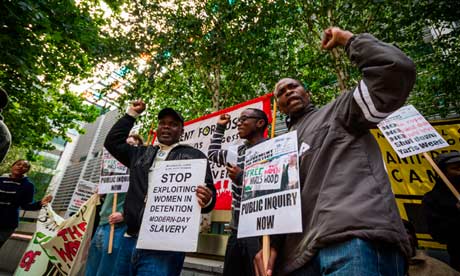 Police are now investigating claims by a detainee known as Tanja that she was subjected to sexually inappropriate behaviour. Photograph: Guy Corbishley/ Guy Corbishley/Demotix/Corbis

Speaking last week from inside Yarl’s Wood, a 46-year-old Nigerian woman said she had made an official complaint to the centre two weeks ago over inappropriate sexual behaviour by guards towards fellow detainees. Serco said it had not received a complaint but would “thoroughly investigate” if it did.
The woman, who has lived in the UK since 1999, alleged inappropriate behaviour was a live issue. She said: “Some of the women are succumbing to whatever they are being propositioned to do. Some of the guards are touching the women; the girls are being promised that they are going to get their freedom. They say things like: ‘You better be nice to me if you want to get out of here.’ They make funny gestures: one puts his finger in his mouth and winks at me.”
A 33-year-old from Lesotho, who has had two spells in Yarl’s Wood and is currently in contact with women recently released from the centre through the All African Women’s Group, said: “They give these ladies the impression that if you sleep with them they can help by putting in a word for you to be released or help with your case. Most of the time women sleep with the guards hoping that if they sleep with that person I am going to get a favour in return.”
Their claims – strongly rejected by Serco – appear to corroborate similar allegations made by a former Yarl’s Wood detainee known as Tanjawhose case was reported in the Observer last week.
Police are investigating her claims that she was subjected to inappropriate sexual behaviour from guards. Three Serco staff have already been dismissed over her allegations, which Tanja’s lawyer, Harriet Wistrich, has said could amount to misconduct in public office.
Meanwhile, the 46-year-old detainee currently inside Yarl’s Wood says she is scared by single male guards who enter her room after dark, in an apparent breach of Serco policy.
“You find them coming in during the middle of the night when you are sleeping. I have been in bed lying down and someone has come into my room and I wake up and I am frightened. Why would a man be in my room at 2am?”
A Serco statement said: “It is sometimes necessary for officers to enter rooms at night in the course of ordinary safeguarding. Serco’s policy is that a male officer must not enter a female’s room alone.” It also said that corridors leading to detainees’ rooms were monitored by CCTV.
The woman from Lesotho, who was last inside Yarl’s Wood in October 2009, says that she witnessed guards entering rooms where a woman was alone. “I used to see how the guards would sneak into the detainees’ rooms and sleep with them, flirt with them. I see the guards touching the detainee – sometimes they forget where they are and it can be so obvious, the chemistry between two people who are sleeping together.”
Another woman, 26, who left Yarl’s Wood in July 2013, also alleges that she saw staff touching female detainees inappropriately. “One man touches their bums and the girls smile back. He touches people who don’t know much English. It’s been going on a long time, but I’ve seen this happening,” she said.
“Women in there have a lot of stories to tell about how guards are mistreating them, touching their bums, making sexual comments like ‘today you like nice’. Some guards flirt with women a lot.”
She said she was too scared to make an official complaint while she was inside and even now she will only reveal her nationality as African.
The woman from Lesotho alleges one guard who flirted with her in 2009 is still working there because a friend had complained to her about the same man when she was released from Yarl’s Wood earlier this month. Serco said it had no record of a complaint against the man, while the woman said she had not pressed any complaints while she was inside because she was pregnant and feeling ill at the time.
“I could easily have had a relationship with him: he seemed nice, sympathetic, that he cared. It’s what every woman wants in that situation,” she said.
The former detainee added the immigration crackdown had made the situation worse because women inside the centre had become even more desperate to stay in the UK. Cristel Amiss of the Black Women’s Rape Action Project said: “All complaints of abuse must be fully investigated and victims being released and given protection so there can be no reprisals from guards who are in a position of power over them.”
Serco added: “We view this type of behaviour extremely seriously: complaints are always investigated and where there is evidence of misconduct we take prompt and decisive disciplinary action and report it to the police as appropriate. This has resulted in dismissals on the few occasions on which it has occurred in the last five years.”

Your opinions on health care reform, taxes, and even the president’s dog come down to racial bias