Time for Santa to wave “vaarwel” to Black Pete?

(Reuters) – The Netherlands and Belgium are two countries that pride themselves on progressive laws and open societies, but critics say they are stuck in the dark ages when it comes to depictions of Santa Claus and his helpers.
Saint Nicholas, or “Sinterklaas” in Dutch, brings presents to children on December 5 in the Netherlands and on December 6 in Belgium, and is always accompanied by at least one assistant dressed in 17th century costume who has a blackened face. 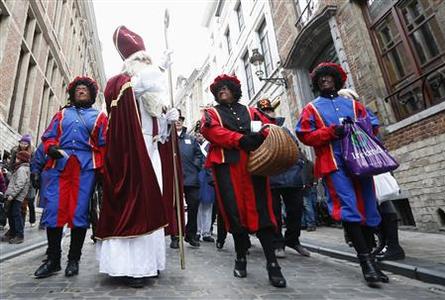 The tradition has been difficult for Dutch and Belgian people to explain abroad, where “Zwarte Piet” (Black Pete) is viewed with either outrage or ridicule.
Dutch pub “De Hems” in London opts for blue face paint instead. Sinterklaas celebrations in western Canada organized by the Dutch community were called off last year and former Dutch colony Suriname has said Zwarte Piet is not welcome this year because of concerns over racism.
For most Dutch and Belgians Zwarte Piet is an innocuous fairytale character who assists the popular Sinterklaas and hands out candy to children, but some there too argue he is a harmful stereotype best done away with. 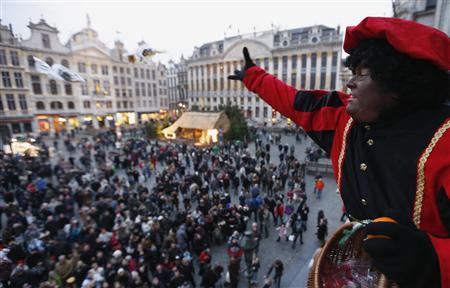 “It was about six years ago when my mum came home from work and phoned me,” performance artist Quinsy Gario, who was born on the Dutch Caribbean island of Curacao, told Reuters.
“On the phone I could hear her trembling. She was upset, livid, and said someone at work had called her Zwarte Piet.”
In 2011, Gario decided to protest against the tradition by standing with a “Zwarte Piet is racism” T-shirt in a crowd watching a Sinterklaas parade in the Dutch town of Dordrecht. His subsequent arrest made headlines in Dutch media.
Film by a bystander showed three police officers pinning him to the ground and kneeing him in the back. Gario also said he had pepper spray sprayed in his eyes. 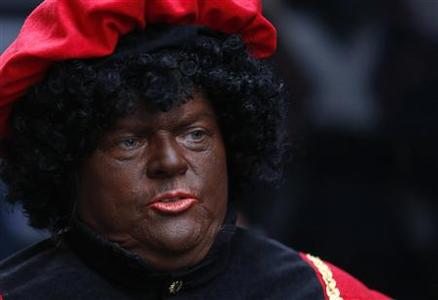 “I spent six and a half hours in a jail cell for freedom of expression,” he said.
BUSINESS EMBRACE
Nevertheless, Zwarte Piet remains popular in 2012, and his traditional arrival by boat with Sinterklaas a few weeks ahead of the actual celebration was witnessed by thousands of starry-eyed children in Brussels and Amsterdam.
Sinterklaas, the presents he brings, as well as the traditional food and candy sold around this time are also good business for companies such as toy stores and supermarkets.
“Families with children are a very important customer group of ours. How would you explain to your children that Zwarte Piet is no longer allowed?,” said Chief Operating Officer Sander van der Laan of Albert Heijn, the Netherlands’ largest supermarket. 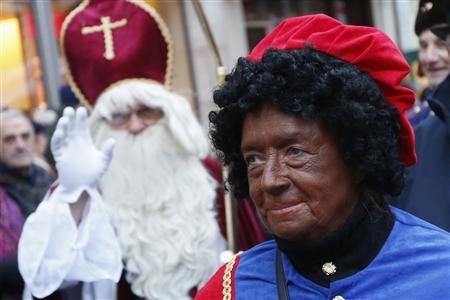 Dutch anti-discrimination organisation RADAR said that it would talk to retail organizations in the coming months about how to make Zwarte Piet less racist.
“We believe that you have to go to Piet, not Zwarte Piet, to leave the celebration intact but get rid of the stereotypes,” said Margriet Maris, a lawyer at RADAR.
Formal complaints are still quite rare. Belgium’s centre of equal opportunities said that of more than 4,000 complaints it received a year only one or two were related to Zwarte Piet.
RADAR said it had received about 25 related complaints this year, still only a fraction of the 1,000 it dealt with overall.
The tradition of St Nicholas exists in other European countries, including Austria and Germany. But he is only accompanied by black helpers in the Netherlands and Belgium.
Celebrations were depicted on paintings of 17th century Dutch artists Jan Steen and Richard Brakenburg, but Zwarte Piet only made his first appearance in a mid-19th century illustrated book by Dutch teacher Jan Schenkman. 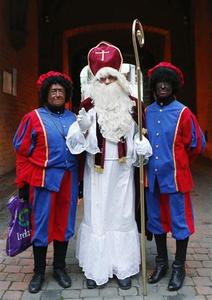 Entitled “St Nicholas and his servant,” it showed a short, dark-faced man dressed in a Moorish costume a few steps behind an imposing white man with a white beard and bishop’s outfit.
“There’s a theory that says that important people had a black servant, it was a status symbol. Sinterklaas was an important man, so he needed one too,” said John Helsloot a researcher at the Meertens Institute in Amsterdam.
“Somebody who dresses up as Zwarte Piet is not a racist but it is a fact that he’s part of a tradition which gives a stereotypical, racist image of black people,” he said.
Pressure on Zwarte Piet seems to be increasing in 2012 and even well-known conservative blog “Geen Stijl” (No Style) has written that it’s time for Sinterklaas to find a new helper.
“It’s 2012, people,” wrote GeenStijl in a post that attracted much attention. “We’re better than Zwarte Piet.”
(Additional reporting by Philip Blenkinsop, editing by Paul Casciato) 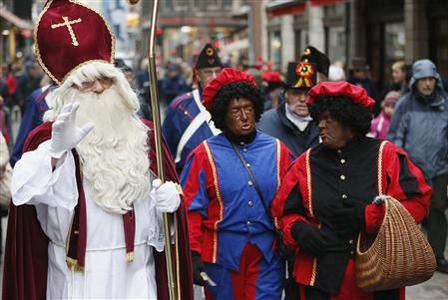 Indigenous African Tribe fighting for their lives in Libya (video)