By SAM ROBERTS     Published: August 13, 2013
Simeon Golar, the first New York City Housing Authority chairman to have grown up in public housing, which he championed in the face of fierce neighborhood opposition in the early 1970s, died on Sunday in the Bronx. He was 84.

His death was confirmed by his daughter Charlotte Golar Richie.

Mr. Golar had been a member of the Housing Authority’s three-person governing board and head of the city’s Human Rights Commission when Mayor John V. Lindsay asked him to return to the authority as its 12th chairman in 1970. He inherited the largest program of low-rent public housing in the nation and an agency of some 10,000 employees.

He also inherited a maelstrom that had been building in Queens. The Lindsay administration had been pursuing a dual policy of fostering racial integration while clearing the slums and redistributing some public housing to middle-class areas. Now it had set its sights on Forest Hills, a predominantly white, middle-class section of Queens, proposing that a low-income high-rise housing project be built there.

“The reaction to the mention of his name in Forest Hills or other middle-class white areas of New York is intense,” The New York Times Magazine said in a profile of Mr. Golar in 1972. “Frail old women contort their faces with fury and spit on the sidewalk. Mild-mannered family men string out obscenities. Golar is denounced as an example of the arrogant, insensitive city official, ‘typical of the Lindsay administration,’ who doesn’t give a damn about the middle class.” 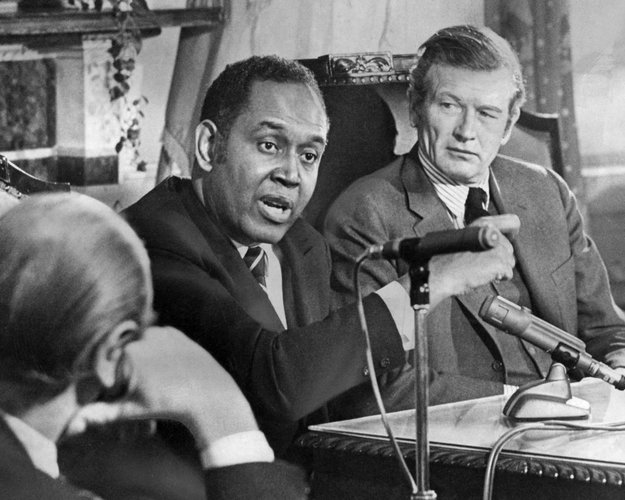 Mr. Golar, an avowed integrationist, was quoted as saying that Forest Hills was “populated by people with short memories who still do not know how the other half lives and do not care to.” One televised debate with the head of the Forest Hills Residents Association dissolved into name-calling. Some demonstrators from the neighborhood, which has a large Jewish population, carried signs accusing him of anti-Semitism. Some said that as a black man he cared only for blacks.

To cool tempers, Mr. Golar invoked the Flushing Remonstrance, the colonial document signed in defense of the Quakers, exhorting the project’s opponents to welcome people “who come in love unto us.”

Addressing the residents’ concerns about crime and sinking property values, he proposed selling one of the three 24-story buildings planned for the site and using it for middle-income housing. He also promised “careful screening” of tenants to keep to a minimum the number of those on welfare.

Ultimately a compromise was forged by a young Queens lawyer named Mario M. Cuomo, who had been recruited by Mayor Lindsay. The project was scaled down, and a larger share of apartments was reserved for the elderly.

But “Forest Hills” had become shorthand for the racial and class tensions that underpinned much of the national debate about public housing, between its liberal advocates and its conservative opponents. President Richard M. Nixon cited the Forest Hills episode in declaring a federal government moratorium on building public housing.

Mr. Golar challenged those who, like Mr. Nixon, saw such projects as dehumanizing — as “warehousing the poor.”

Simeon Golar was born on Oct. 12, 1928, to a teenage mother in Chester, S.C. He grew up, he recalled, across the street from a “separate but equal” cemetery. His young parents put him up for adoption as an infant, and he took the name of his adoptive father, a bank guard.

In 1935, in the depths of the Depression, the elder Mr. Golar moved the family to New York, where he worked as a janitor. In 1942, a job in the Brooklyn Navy Yard qualified him to move into the Fort Greene Houses, a sprawling, brand-new city project in Brooklyn.

Active in the Liberal Party, Mr. Golar was its candidate for state attorney general in 1966, a pioneering role for an African-American. Mr. Lindsay appointed him Human Rights Commission chairman in 1969. After losing a race for City Council president in 1973 as the Liberal nominee, he was appointed a Family Court judge by Mayor Lindsay. Afterward, he was elected to the State Supreme Court, worked as a developer, television commentator and law professor, and ran unsuccessfully for Congress from Queens as a Democrat.

Besides his daughter Ms. Richie, a former state representative in Massachusetts and now a candidate for mayor of Boston, Mr. Golar is survived by another daughter, Katherine Morris, a doctor.

Mr. Golar had fond memories of growing up in public housing. When his family moved into the Fort Greene Houses, they had been living in a basement apartment on Bushwick Avenue, “where we lived down with the coal and the furnace,” he said. He recalled the new apartment as having “freshly painted walls and a shiny new bathroom and kitchen.”

“First thing we did after we moved in was we went into hock and bought new stuff for the apartment,” he said. “People have hope when they move into attractive surroundings. Lives are infused with hope they never had before.”