The most complete view yet of a possible human ancestor uncovered in South Africa has revealed an intriguing mix of human and ape traits.

The two-million-year-old remains of several partial skeletons belonging to a previously unknown human like species were found in 2008 near Johannesburg.
The new analysis shows this species –Australopithecus sediba – had a human-like pelvis, hands and teeth, and a chimpanzee-like foot.
The findings appear in Science journal.
In six separate research reports, scientists probed further into the anatomy of a juvenile male skeleton, commonly referred to as MH1, a female skeleton, known as MH2, and an isolated adult tibia or shinbone, known as MH4.
The specimens were found at Malapa in the famous Cradle of Humankind World Heritage Site, just to the northwest of Johannesburg.
They were pulled from a pit – a depression left in the ground by a cave complex that lost its roof through erosion.
Scientists think the female and male could well have been mother and son.
It seems they died together in some tragic accident that saw them either fall into the cave complex or become stuck in it. After death, their bodies were washed into a pool and cemented in time along with the skeletons of many other animals – sabre-tooth cats, hyenas, antelope, even birds and mice.
The individuals from Malapa fall within a broad group known as the australopithecines, upright-walking humanlike creatures that roamed Africa between four million and two million years ago.


An analysis of Au. sediba‘s lower limb anatomy by Jeremy DeSilva from Boston University and colleagues suggests that the species walked in a unique way.
Its small heel resembles that of a chimpanzee more than it does a human. This suggests it likely walked with an inward rotation of the knee and hip, with its feet slightly twisted.
This primitive way of walking might have been a compromise between upright walking and tree climbing, the researchers suggest, since Au. sediba seems to have had more adaptations for tree-climbing than other australopithecines.
The findings suggest that some species of australopithecine climbed trees, some walked on the ground, and some did both. 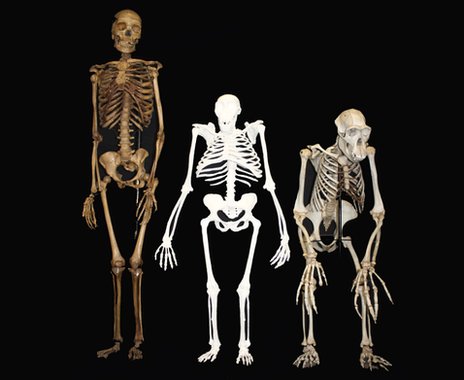 Here. Au. sediba is compared with a modern human (L) and a chimp (R)

Meanwhile, Joel Irish from Liverpool John Moores University and colleagues investigated Au sediba‘s teeth. Like other parts of the skeleton, the teeth are a collage of primitive and human-like features.
They bear many resemblances to the teeth of another South African australopithecine, known as Au. africanus, suggesting these two species formed a southern group, distinct from East African forms such as Au. afarensis, represented by the famous “Lucy” skeleton.
Lead investigator Lee Berger, from the University of Witwatersrand, has been investigating whether thinly layered material excavated with the specimens represents fossilised skin from the creatures. Prof Berger submitted preliminary findings to the recent Paleoanthropology Society meeting in Honolulu, Hawaii.