Recalling a Dark Secret of the Slave Trade, Buried in the Deep

By NINA SIEGAL   Published: July 1, 2013
AMSTERDAM — On Jan. 1, 1738, the Dutch West India Company slave ship Leusden, carrying nearly 700 African men, women and children through Surinam, got caught in a terrible storm. Fearing that the captives would scramble for the few lifeboats, the captain ordered the crew to shut the ship’s hold and lock the Africans below deck.

Six hundred and sixty-four people were suffocated or drowned while the boat sank and the crew escaped. It was the greatest tragedy of its kind in the Atlantic slave trade, the historian Leo Balai said, with a death toll almost five times that of the next largest: the massacre of 132 slaves on the Zong, a British-owned ship that was transporting slaves from Africa to Jamaica in 1781. They were thrown overboard for insurance money.

“The story of the Leusden was never told in Holland,” Mr. Balai said. “It was the largest murder case in the history of the slave trade, but no one ever talked about it.”

It is now the subject of an exhibition at the Scheepvaart Museum, the maritime history museum here. The interactive exhibition takes visitors below deck on the ship before taking them above deck to meet the captain and other people who benefited from the Atlantic slave trade.

The four-room exhibition is based on a Ph.D. thesis that Mr. Balai, who is Surinamese Dutch and whose ancestors were enslaved, published in 2011, resulting from five years of research in the Dutch national archives in The Hague. 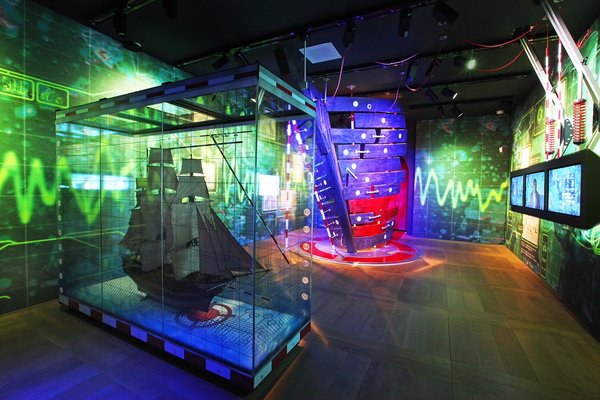 Bibi Neuray——The Leusden exhibition includes a replica of the ship, which sank in 1768, drowning 664 Africans.

“If you look for a list of shipping disasters in Dutch history you won’t find it,” said Remmelt Daalder, a senior curator at the Scheepvaart Museum. Why not? “It wasn’t seen as important. It was a large loss in terms of money, but no one seemed to mind that it was a large loss in human lives. No one was punished, and in fact, some of the crew members got a reward because they were able to save a box of gold from the ship.”

The exhibition opened last week to coincide with the commemoration of the official end of slavery in the Dutch colonies, which took place 150 years ago on July 1, 1863. Although slaves were never brought to the Netherlands, Dutch merchants played an important role in the maritime “triangular trade” from the 17th to the 19th century, capturing people from the West Coast of Africa and shipping them through its colonies in the Caribbean to the Americas.

The Dutch West India Company alone shipped about half a million people to the American continent and shipping back the fruits of their labor — sugar and tobacco, for example — from the 1670s until about 1740. The Leusden was the first West India Company ship that was specifically designed for transporting slaves, Mr. Balai said. Other slave ships were merely cargo ships that were converted for the purpose. It made 10 trans-Atlantic voyages, carrying from 500 to 700 Africans on each trip.

As the Dutch commemorate the 150th anniversary of the abolition of slavery, however, some say that there’s still insufficient acknowledgment of the role the country played in the trade, or of the toll it has taken on the lives of its people. In the past five years, leading up to this commemoration, a number of Surinamese groups and others who represent people from the former Dutch colonies have been demanding that the government formally apologize.

On Monday in Oosterpark in Amsterdam at the Keti Koti Festival, which celebrates the abolition of slavery, many had been hoping that Willem-Alexander, the new Dutch king, would issue a formal apology, but he decided not to speak at all. Instead, Lodewijk Asscher, the Dutch deputy prime minister expressed the government’s “deep regret and remorse” over slavery. 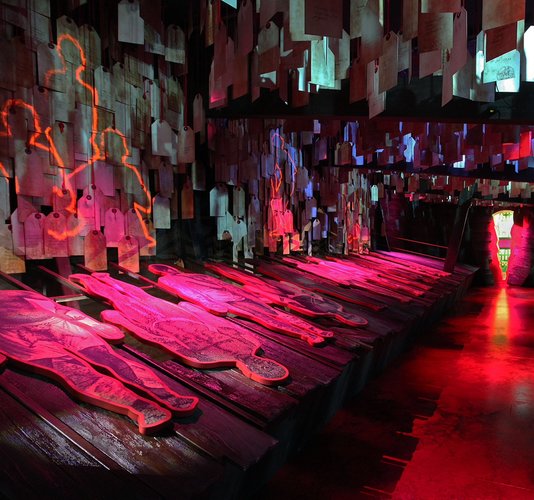 Bibi Neuray—–A rendition of the slave ship’s lower deck is designed to recreate the feeling of being imprisoned.

“It is a day to commemorate the victims and to dwell on one of the most painful periods of our history,” he said in his speech. “Many people are still bearing that pain. Whoever our forebears were, whether victim or perpetrator, we are united in our perplexity of this degrading practice of slavery. How did people dare think that they had a right to treat others as their property? Why did the Netherlands not put an end to this much sooner?

“I stand here in the name of the Dutch government, and I look back at this stain on our history. I look back and express deep remorse.”

Sandew Hira, an economist and historian, has been an advocate for an official apology. “The Dutch glorify the 17th century and call it the Golden Age,” he said last week. “But in that century they were kidnapping hundreds of thousands of people from Africa and torturing them and forcing them to work for free in the colonies, in what we’d now call forced labor camps. In our opinion that so-called ‘Golden Age’ was the high point of the crimes against humanity perpetrated by the Dutch.”

On June 13, the Dutch Council of Churches issued a formal apology for slavery, and its secretary general, Klaas van der Kamp, called it a “black holocaust.” “Hundreds of thousands of people were removed from their homes, exploited and forced to spend a lifetime in captivity,” the statement says. “As churches we recognize our part in this shameful past and we must conclude that theology was abused in certain circumstances to justify slavery.”

The deputy mayor of Amsterdam, Andrée van Es, said the city doesn’t want to overlook its role in the slave trade. “When I was in school no one told me about slave trade history,” she said. “There is a lack of knowledge and also the Dutch are not very good at looking into the black pages of their history. There is a kind of taboo. People say, ‘Oh, it was 150 years ago, generations ago, we have to look at the future.’ In a way that is true. You can’t stay a prisoner of your past, but to move forward you have to look into the past.”

That is changing now, she said, as Amsterdam celebrates the 400th anniversary of its Canal Belt, built, in part, with money earned from the slave trade. “We are very proud of our history and we also acknowledge that some of this wealth was earned by the trade in people, and also the labor of slaves in the colonies, and that is what makes it more important for us to commemorate.”

Although there is plenty of documentary evidence about the history of the slave ship Leusden in the archives, no objects survived — no model of the ship, no construction plans, no material owned by the crew.

The exhibition at the Maritime Museum, created by a theater set designer, relies on the experience of being inside a replica of the ship to engage visitors. While they are in the dark hold, visitors will hear fearful voices asking where they are headed and why they are being held captive. Paper tags hang from the ceiling, scribbled with the names, ages and dates of capture of the Africans on board — names from the West India Company archives. In the final room, those nametags become gravestones, with faces of real people in place of the data to convey the true human toll.

“Our idea was that we wanted people to gradually understand the ins and outs of the slave and especially the fate of the people on board the Leusden,” said Mr. Daalder. “It has been compared to ‘C.S.I.’ — we’re starting the search for the Leusden, and investigating it as a crime.”

To continue with his research on the Leusden, Mr. Balai will travel to Surinam this summer with marine archeologists to search for the wreck. They’ll be looking for it in the Maroni River, at the border of Surinam and French Guiana. “We hope we can find something, or some materials, because it’s very important to know how the ship was built,” Mr. Balai said. “It’s also a mass grave because 664 people lost their lives there.”