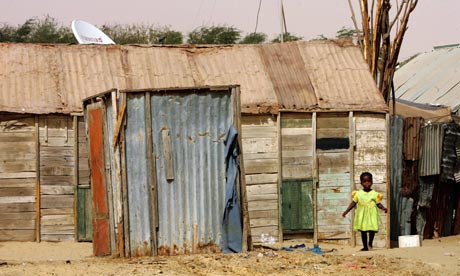 Mbarka Mint Aheimed first met her father on the day he forced her into slavery. The man who dragged her from her mother when she was aged five needed “a drudge” in his wife’s mansion. Since Aheimed was the result of him raping her mother – one of his slaves – she was a natural choice, he told her.

“Because my mother was her husband’s slave, his wife saw us all as personal property. It was completely normal for her to do what she wanted with us,” Aheimed would later tell anti-slave activists in Mauritania. Living in a tiny hut that opened to the fierce heat of the orange dune-swept deserts, she worked from dawn to dusk. For 15 years, she never had a day off. “The family lived in a mansion but I was the only person who lifted a finger to work,” she said.

Once she was old enough to start covering her head – but forced, against tradition, to leave her arms bare to carry out heavy lifting – one of the slaveowner’s sons drove her miles into the desert and raped her. Later he would only take her far enough to collect firewood for making tea on their return.

Aheimed’s story isn’t uncommon. In 1981 Mauritania became the last country to abolish slavery, although it was only criminalised in 2007. Officials repeatedly denied it existed and refused to talk to the Guardian about slavery. But activists and former slaves spoke of a centuries-old practice, a relic of the trans-Sahara slave trade when Arabic-speaking Moors raided African villages, flourishing in remote outposts of this vast desert country.

A rigid caste system that favours “noble-borns”, and zealous efforts to brand the country an Arab republic, concentrates power and wealth among overwhelmingly lighter-skinned Moors, leaving slave-descended darker-skinned Moors and black Africans on the edges of society. Up to 800,000 people in a nation of 3.5 million remain chattels, according to activists who routinely document cases like Aheimed’s.

But slavery is often harder to pin down. With almost half the population living on less than $2 a day, many slaveowners work alongside their slaves.

Boubacar Messaoud grew up in a grey area between slavery and freedom, paid a token salary in return for farming. “One day when we were about seven, the slaveowner’s son, whose name was also Boubacar, said I should be called Boubacar abd [the black slave], so people didn’t confuse us. That was when I understood.”

And many do not identify themselves as slaves. “When people talk of slavery, they talk of chains, prisons, and threats. That was the slavery of those who had known liberty – the Africans who jumped into the sea rather than be enslaved in America,” said Messaoud, who founded the abolitionist organisation SOS Slaves. “Today we have the slavery American plantation owners dreamed of. Slaves believe their condition is necessary to get to paradise.”

Thirteen years after slavery was abolished, SOS Slaves began holding secret meetings beneath rugs to muffle voices, in moonlight on the flat rooftop of a building in Nouakchott. Messaoud and his co-founder, a “noble” who had chosen a slave as a seventh birthday gift, were harassed and imprisoned. Even today, state agents lurking outside the building trail visitors afterwards.

Family members initially voiced opposition, too. “My mother believed she was protecting me when she reminded me that I was a slave – that I shouldn’t forget my place,” Messaoud said.

Statistics paint a bleak – and complicated – picture. A judge told the Guardian Mauritania is unlikely to improve on its record of one successful prosecution anytime soon: “[Recently] three runaway children overheard me saying we had to imprison their master. They immediately started crying in horror. They suddenly changed their story, they said he always treated them well, fed them, sheltered them. They wanted to go back with him.”

Some former slaves like Malaka, 28, tended his owner’s goats unsupervised for weeks at a time in the desert. “I didn’t want to leave because I was scared to leave my family behind. And I was scared because I had heard about money, but I had never seen it in my life,” he said.

Escape is no guarantee of freedom. When Ahmeid went to her local magistrate, her mother testified against her. Her uncle beat her savagely. After weeks shuttling between sympathisers, she found herself crouching in a two-storey building in Nouakchott late one evening as truckloads of policemen stormed an anti-slavery organisation where she had been sheltering. The group’s leader, Birame Ould Abeid, and three others were jailed after publicly burning religious texts that have been used to justify slavery, and calling for black Moors and black Africans to unite.

With black Moors used as foot-soldiers in state crackdowns that target black populations, mutual suspicion between the two populations is unlikely to fade soon. But the routine arrests and beatings of abolitionists show how a ruling elite, having woven slavery into the heart of political power in Mauritania, are fearful of it unravelling, Nouakchott-based campaigner Toure Balla said. “There are places where one family has 5,000 slaves – that is 5,000 guaranteed votes,” said Balla, who attends a growing swell of weekly protests.

Abolitionists say Mauritania is only the tip of the iceberg: “Slavery exists in all the countries of the Sahara desert. But it’s only when the slave lifts their head to speak that the crime is discovered,” said Messaoud.

The Hypocrisy of Cornel West