Kurt Barling: ”People are very shocked at what they’ve come across”

An Islamic centre in north London has been destroyed by a fire in an apparent hate crime attack.
The Met Police said the fire, which happened at the Al-Rahma Islamic Centre in Muswell Hill in the early hours, is being treated as suspicious.
A spokesman said the letters EDL (English Defence League) were sprayed on to the building, used by the Somali Bravanese Welfare Association.
MP Theresa Villiers said: “This kind of hate crime is absolutely despicable.”
The Conservative MP for Chipping Barnet said: “This is not just an attack on the Muslim community it is an attack on all of us and our values.

“We are a highly diverse multi-ethnic borough with excellent community cohesion in Barnet. We should under no circumstances allow violent extremists to divide us with this kind of outrage.”
The Met’s Counter Terrorism Command are investigating the cause of the fire on Coppetts Road.
BBC London correspondent Kurt Barling said the centre’s leaders had told him they had seen freshly sprayed graffiti on the building and they were concerned the fire was in reaction to the killing of a soldier in Woolwich. Two men have been charged in connection with the attack.
The centre was not used for prayers, but as a community centre which was mainly used by children after school.
Abu Bakar Ali, from the centre, said: “The Somali community is in fear.
“We are all shocked about what has happened and we strongly condemn the attack on the centre. As you can see, the situation is a very serious one indeed.
“We are appalled and deeply saddened by the horrific and foolish act against a peaceful community. While no-one was thankfully physically hurt in the attack, the effects of this crime will be felt very deeply.” 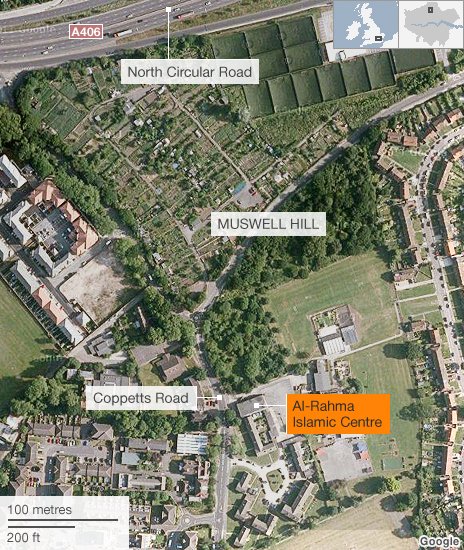 Zakariya Mohamed, 22, who has been attending the centre for 13 years, said: “I’m heartbroken.
“I can only speak for myself but I feel this is an act of terrorism. The dictionary defines a terrorist as anybody that causes terror or intimidation with a racial agenda.
“I think our community will recover though. We don’t want to seem like we are defeated. I dream of being able to rebuild the centre even bigger and stronger.”
Borough Ch Supt Adrian Usher said the EDL graffiti was found on the outside of the building.
He said the Counter Terrorism Command Unit was investigating the incident because of their expertise, rather than it being terrorism related.
Kevin Carroll, of the EDL, said the group “do not approve of any religious buildings being attacked”.
‘Wave of attacks’
Ch Supt Usher said he did not believe anyone was inside at the time of the blaze.
“I have spoken to community leaders and assured them that a thorough investigation is being conducted.
“The safety of our communities is always our priority and we are consulting widely, offering our support and reassurance.
“All communities can be confident that they have our support and I can be contacted personally to answer their concerns.” 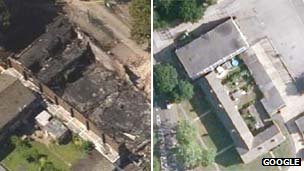 The fire happened in the early hours

The Islamic Human Rights Commission (IHRC) said Muslims were now living in fear of a “wave of attacks”.
Massoud Shadjareh, chair of IHRC, said: “Muslims feel scared right now and it is completely understandable.
“Muslims have been physically attacked, mosques burnt down, cemeteries vandalised and social media is full of anti-Muslim hatred and violent threats towards Muslims.
“More needs to be done to protect the Muslim community.”
Mayor of London Boris Johnson said: “There is no place in an open, tolerant and diverse city like London for hate, for prejudice, for violence.”
He added: “Londoners will see this for what it is – cowardly, pathetic and utterly pointless.”
Labour’s shadow home secretary Yvette Cooper said: “There is no place in Britain for violent extremist attacks or hate crimes against any faith or community.”
Two nearby properties were evacuated following the fire and no-one was reported to be injured. One woman was treated for shock.
A fire service spokesman said the brigade was called at 03:14 BST.
Six fire engines and about 35 firefighters tackled the blaze and it was brought under control just over an hour later.
http://www.bbc.co.uk/news/uk-england-london-22785074

Moors In The Americas, A Complicated History