The wife of former president Nelson Mandela has warned that South Africa has become an ‘angry nation’, as it is refusing to deal with its apartheid past.

Human rights activist Graca Machel, 67, said the nation is on the brink of ‘something very dangerous’ which it may not be able to stop.

The Mozambican third wife of ANC icon Mandela was speaking at the memorial service of a taxi driver who died in police custody after officers tied his hands to the back of their van and dragged him to this death. 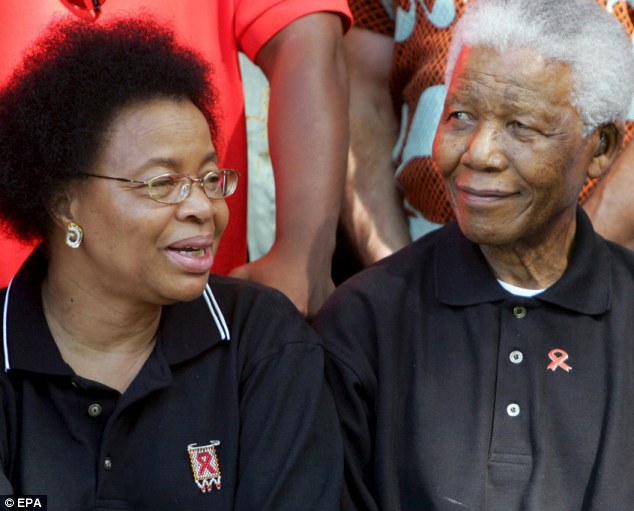 Taxi driver Mido Macia is alleged to have argued a traffic violation after which police handcuffed the 27-year-old to their vehicle in front of a horrified crowd.
He was found dead two hours later in a police cell in the Daveyton township of Johannesburg, last Tuesday.

At the memorial Mrs Machel said South Africa’s anger came from ‘unaddressed issues’ referring to the nation’s history of apartheid, The Telegraph reports.
Mrs Machel, said a reluctance to deal with the nation’s past has resulted in an ‘increasing institutionalisation of violence and a police force which is ‘actively aggressive’ towards the public.
‘South Africa is an angry nation,’ she said. ‘We are on the precipice of something very dangerous with the potential of not being able to stop the fall.’ 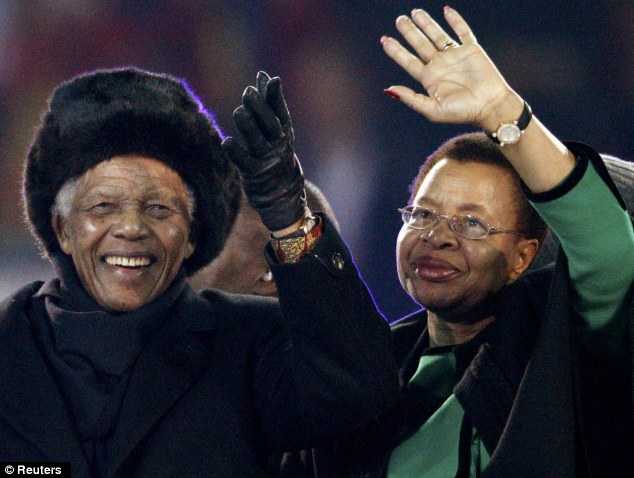 Painful history: Graca Machel, with Nelson Mandela in 2010, said the situation is to be blamed on a reluctance to deal with lingering issues from the nations apartheid past Torture: Mrs Machel spoke at the memorial of taxi driver Mido Macia, who was found dead in a police cell in a Johannesburg township after he was handcuffed to a police van and dragged behind it

She said: ‘The level of anger and aggression is rising. This is an expression of deeper trouble from the past that has not been addressed.

‘We have to be more cautious about how we deal with a society that is bleeding and breathing pain.’
She spoke out as South Africa’s justice system has grown increasingly synonymous with police brutality.
In 2011 man was beaten to death by police during a peaceful protest in the Free State and last year, police opened fire on workers during a miners strike, killing 34 people.
Another recent case highlighting the nation’s culture of violence and high number of private gun owners is that of fallen Paralympic hero Oscar Pistorius’s fatal shooting of his partner Reeva Steenkamp.

Pistorius, who is currently released on bail, argues that he accidentally shot his model girlfriend believing her to be a burglar, using one of several firearms he kept at his mansion. 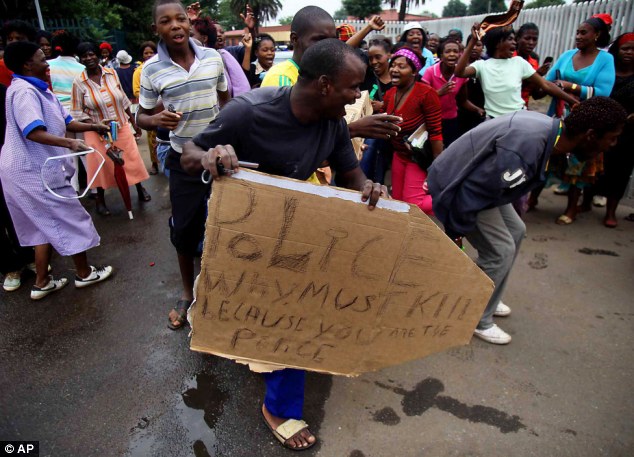 Mrs Machela’s comments are likely to rattle ruling party ANC, which has been at the helm of the nation since the abolition of apartheid.
Both Mrs Machela and her husband Nelson Mandela have refrained from commenting on the running of South Africa since he left his position as president 14 years ago.
President Zuma, speaking to traditional leaders in parliament on Thursday, said that despite the events of recent weeks, it was wrong to paint his country as an “inherently violent place to live in’.
‘South Africa is not (a) violent country. It is certain people in our country who are violent. By and large we are not, we are peace-loving people.’
Meanwhile South Africa’s Independent Police Investigative Directorate reported 232 deaths in police custody and another 488 deaths as a result of police action from early 2011 to early 2012, a ten per cent drop over the previous year.
Read more: http://www.dailymail.co.uk/news/article-2290213/South-Africa-angry-nation-brink-dangerous-warns-Nelson-Mandelas-wife.html#ixzz2MzYJozZ5