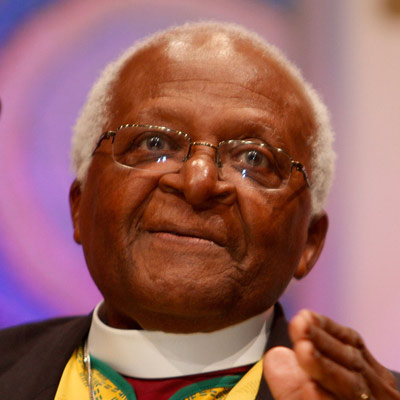 South African anti-apartheid campaigner Desmond Tutu has won the 2013 Templeton Prize worth $1.7 million for helping inspire people around the world by promoting forgiveness and justice, organisers said on Thursday.
A leading human rights activist of the late 20th century, the former Anglican archbishop of Cape Town played a pivotal role in the downfall of apartheid and subsequently worked to heal wounds in South Africa’s traumatised society.
Tutu, 81, won the Nobel Peace Prize in 1984 for standing up against white-minority rule. He remains a prominent campaigner for peace and human rights. The Templeton award was announced as his friend and fellow Nobel laureate Nelson Mandela was fighting pneumonia in a third health scare in four months for South Africa’s first black president.
Established in 1972 by the late American-born investor and philanthropist John Templeton, the annual prize – worth more, in monetary terms, than the Nobel – honours a living person “who has made an exceptional contribution to affirming life’s spiritual dimension”.
“When you are in a crowd and you stand out from the crowd it’s usually because you are being carried on the shoulders of others,” Tutu was quoted as saying in a statement released by the US-based foundation. “I want to acknowledge all the wonderful people who accepted me as their leader at home and so to accept this prize in a representative capacity.”
Last year’s Templeton Prize went to the Dalai Lama, the Tibetan Buddhist spiritual leader. Other recent winners include British astrophysicist Martin Rees and Canadian philosopher Charles Taylor.
The foundation, whose first award went to Mother Teresa in 1973, praised Tutu as a moral voice for people around the world”. “Desmond Tutu calls upon all of us to recognise that each and every human being is unique in all of history and, in doing so, to embrace our own vast potential to be agents for spiritual progress and positive change,” it said.
“Not only does he teach this idea, he lives it.” Born in Klerksdorp, Transvaal in 1931, Tutu was ordained in 1960 just as the government began resettling black Africans and Asians from areas designated as “whites only”.
His position in the church gave him a prominent platform from which to criticise the system. Angry with his activism, the government revoked his passport, prompting a global outcry.
With pressure on South Africa growing, talks between politicians and the African National Congress led to the release in 1990 of Nelson Mandela and the dismantling of apartheid laws.
After elections, President Mandela appointed Tutu as chairman of a commission examining the human rights abuses of the apartheid years. After his retirement Tutu continued to work as a global campaigner for democracy and human rights.

South African Girl, 17, is Gang raped, mutilated, and dumped on a building site