The brutal murder of a 17-year-old girl, who was gang-raped, horrifically mutilated and left to die on a building site, has sparked a national outcry in South Africa.

Anene Booysen was discovered by security guards on the site in the sleepy town of Bredasdorp, 80 miles east of Cape Town.

According to a Health Department spokesman, her injuries were so severe that her family asked authorities not to release the details. 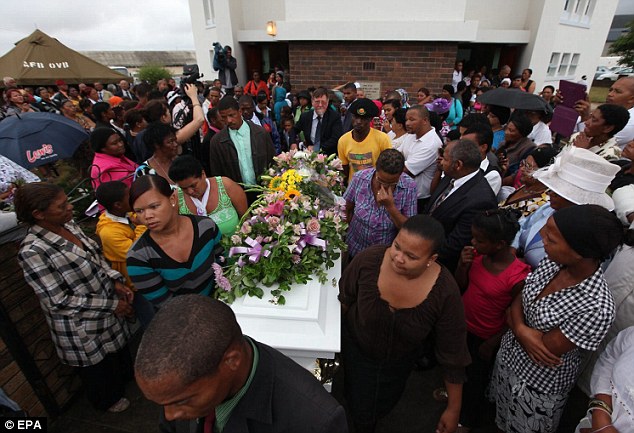 National outcry: Hundreds of mourners gather for the funeral of 17-year-old Anene Booysen who was brutally raped and murdered in a crime that has shocked south Africa

However it was later revealed that her stomach had been slit open down to her genitals and that she had died from her injuries in hospital.
She managed to identify one of her attackers before her death and two men have appeared in court charged with rape and murder.

Jonathan Davids, 22, and Johannes Kana, 21, covered their faces to hide from television cameras and photographers as they made their way into the courtroom.
The magistrate ordered the pair court to remain behind bars until Feb. 26 when their bail application will be heard. They face a maximum life sentence if found guilty.
Police freed a third man arrested after the incident due to lack of evidence linking him to the crime, but said they were investigating whether there were others also involved.

A crowd of 100 people protested outside the courthouse in Bredasdorp, carrying placards saying ‘Show no mercy to rapists’ and ‘No bail to murderers’.

Booysen’s brother told local media he knew one of the suspects.
He said: ‘He was a friend of mine, we went to school together, stayed in one house, we were like brothers.’ 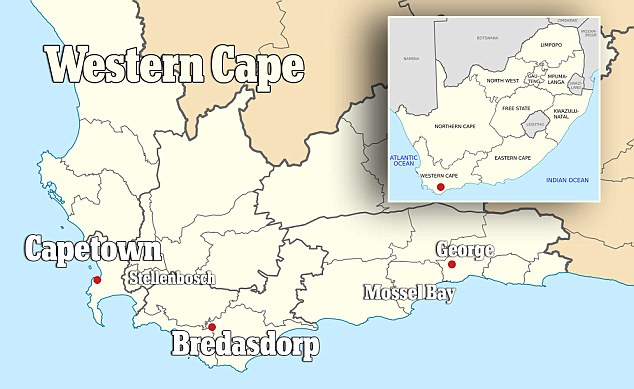 The girl was attacked in the sleepy town of Bredasdrop where two men have been charged with her rape and murder
On Friday, hundreds of people marched through Bredasdorp, chanting ‘enough is enough’ and hundreds attended the funeral on Saturday.
Hundreds of mourners, including politicians, packed a church in the town of Bredasdorp, while a tent was set up to accommodate those who couldn’t fit inside.
The killing echoed the gang rape of a student on a New Delhi bus last year, and has focused attention on South Africa’s high rates of sex crime.
Booysen was found by security guards lying a short distance from her house after partying at a bar last Friday evening.

The Women’s League of the ruling African National Congress is trying to mobilise the public into similar action to the protests against anti-female violence that took place in India after the New Delhi attack.

On Saturday, South African media reported police had arrested a Johannesburg pastor for luring a woman into his church and raping her.

President Jacob Zuma expressed shock and outrage, calling for the harshest possible sentences for the killers and a concerted campaign ‘to end this scourge in our society’. 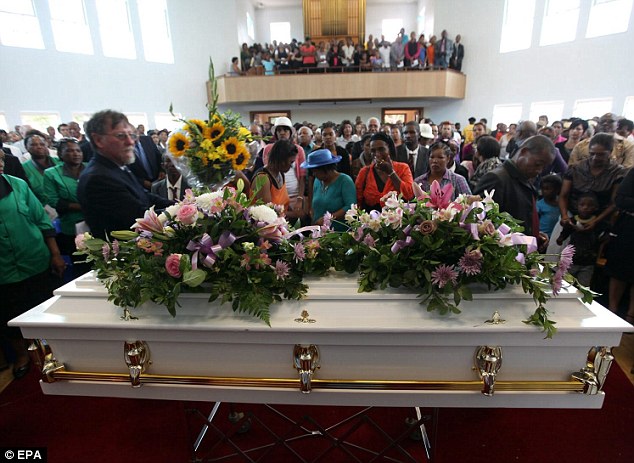 According to a Health Department spokesman, Booysen’s injuries were so severe that her family asked authorities not to release the details

South Africa’s women’s minister called on Tuesday for the toughest possible to be imposed.
Minister of Women Lulu Xingwana, who has met with the victim’s family said: ‘We are saying to the court today there must be no bail for these criminals and monsters.’
‘We expect the toughest and the harshest sentence that can act as a deterrent to other criminals that abuse and kill our women and children.’
‘As an activist I strongly push that there should be no bail for these monsters. What would they do if this happened to any of their family members?’ said Faraah September.
South Africa has the highest number of reported rapes per head of population of any Interpol member country, with more than 64,500 reported in 2011/2012.
A rape is said to be committed in South Africa every four minutes.
Even when suspects are caught, only 12 percent of cases end in conviction and sex crimes seldom cause much public concern.
Read more: http://www.dailymail.co.uk/news/article-2277543/The-gang-rape-horrified-South-Africa-Girl-17-mutilated-death-dumped-building-site.html#ixzz2KiI5fI6y

Neanderthals May Have Worn Dark Feathers