Mr Malema, who was expelled from the governing ANC in 2012, said the EFF wanted the redistribution of farm land and the nationalisation of the mines.
“We will share, black and white. But failure to share means you will be forced to share,” he said.
He described his movement’s ideology as “anti-capitalist”.
Wearing a red beret inscribed with “Commander In Chief EFF”, Mr Malema told journalists in Johannesburg that the EFF was “inspired by people’s suffering on the ground”, the South African Press Association quotes him as saying.
“We all belong here, but we all have to show proof that we belong here,” he said.

“Black people have nothing to show. Therefore we must give them something to show so they can say proudly: This is our land, this is our country.”

Julius Malema once told me that his blood was “black, green and gold” – the colours of the ANC which kicked him out for sowing divisions and bringing it to disrepute.

So saying that he is launching his Economic Freedom Fighters to challenge the oldest liberation movement on the African continent is quite an about-turn.

There is no doubt that South Africa is experiencing what some may call a “winter of discontent”.

A few weeks ago Mamphela Ramphele launched another party, Agang, also with the intention of unseating the ANC.

Mr Malema insists that he will not join with Agang or indeed the official opposition Democratic Alliance.

He will certainly bring with him some of those disillusioned youth from the weakened ANC Youth League but he will need to work much harder to convince South Africans that his policy of nationalisation is the future of the most powerful economy in Africa.

Once a close ally of President Jacob Zuma, Mr Malema has become one of his strongest critics and campaigned for his removal from office at the ANC’s national conference in December 2012.
He has accused the president of not doing enough to help the poor black voters who had helped to elect him.
According to South Africa’s Mail and Guardian newspaper, he did not commit to contesting next year’s elections, saying such things would be decided at the organisation’s national assembly to be held at the end of July. 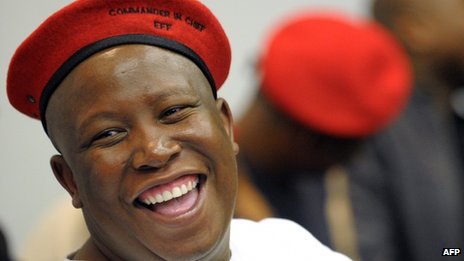 Julius Malema was once a close ally of President Jacob Zuma

Analysts say that increasing numbers of South Africans are losing faith in the ANC, which has dominated the country since 1994, accusing it of corruption and failing to improve the lives of ordinary people.
South Africa is the continent’s biggest economy, largely based on its mineral wealth, but it has experienced sluggish growth in recent years.
Last month, another new party, Agang, was formed by Mamphela Ramphele, the former partner of black consciousness leader, Steve Biko.
However, Mr Malema said he would not work with either Agang or the official opposition, the Democratic Alliance.
Mr Malema became infamous for singing the anti-apartheid song Shoot the Boer, which South Africa’s high court ruled in 2011 was hate speech and banned the ANC from singing it.
However, Mr Malema and other ANC leaders objected, arguing that the song was a celebration of the fight against minority rule.
He was later expelled from the ANC for provoking party divisions.
The 32-year-old also faces a corruption charge relating to a government tender awarded to a company partly owned by his family trust.
He rejects the charge, saying that the case is politically motivated.

Defiant Ethiopia To Proceed With Massive Dam On The Nile River