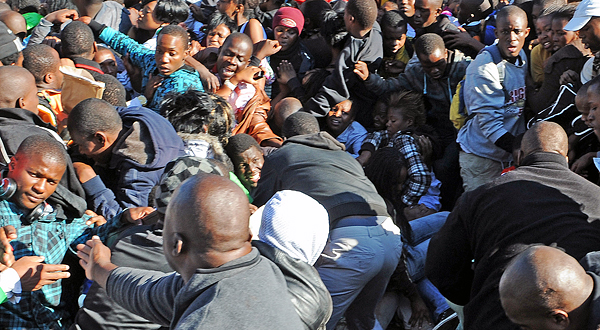 JOHANNESBURG — They lined up well before dawn, some driving from the deep countryside with bags of fluffy blankets and neatly packed sandwiches, to wait for the gates to a new life to open. They hoped for a shot at a coveted spot at one of South Africa’s public universities, and with it a chance to escape the indignity of joblessness that afflicts more than a third of the nation. By morning, the line was more than a mile long.

As the gates were about to open at 7:45 Tuesday morning, thousands of students, many accompanied by their anxious parents, surged forward, desperate to win one of several hundred last-chance places still open at the University of Johannesburg. Amid shoving and screams, one woman, the mother of a prospective student, was trampled to death and several others were badly injured in a frantic scrum.

The stampede embodied the broad crisis in South Africa’s overstretched higher education system as it struggles to extend opportunities once reserved for whites to all South Africans. It is a problem of grade school mathematics: Too many students are seeking too few seats at the country’s public universities, which turn away more than half of their applicants, leaving few options for most high school graduates.

Not only that, the squeeze plays into a wider problem of unemployment among young people.

The jobless rate among youths is nearly 70 percent, a staggering problem that even a college degree does not promise to solve. Adcorp, a temporary staffing firm, said in a recent report that there were 600,000 unemployed college graduates in South Africa.

The rush at the university’s gates, two days after the governing African National Congress celebrated its centennial in a lavish, weekend-long party, underscored the deep frustration many people here have with the slow pace of progress almost 18 years after the end of white minority rule.

“There just aren’t enough places for everybody,” said Karabo Dihba, a 22-year-old would-be applicant who hoped to earn an engineering degree, standing amid the abandoned shoes, blankets and rubbish that littered the area outside the university’s gates. “What are we supposed to do?”

Access to higher education for all South Africans was one of the most cherished goals of the struggle against white minority rule.

The Freedom Charter, which formed the basis of the A.N.C.’s platform and South Africa’s new Constitution, declares that “higher education and technical training shall be opened to all by means of state allowances and scholarships awarded on the basis of merit.”

But like so many goals of the anti-apartheid struggle, this one has proved almost impossible to achieve for a government still struggling to provide housing, health care and basic education.

About 85,000 students had applied for the roughly 11,000 seats available at the University of Johannesburg, university officials told reporters, almost 20,000 more applicants than there were last year. The students at the university gates on Tuesday were hoping to compete for a relative handful of last-minute seats; the main application deadline passed in June.

“The inability to institutions of higher learning to admit the entirety of learners who are eligible for higher education is reaching a crisis level,” the A.N.C.’s Youth League said in a statement.

At a news conference, South Africa’s education minister, Blade Nzimande, conceded that the nation did not have enough seats for everyone who wanted to attend a university, and said the government had plans to expand higher education. But he added that a university degree was not right for everyone.

“We need to change the perception that universities are the only way to go to succeed in life,” Mr. Nzimande said, urging students to apply for diploma programs at technical schools, known as Further Education and Training, or F.E.T. colleges, instead. “At the moment, we are sitting with 50,000 vacancies at F.E.T. colleges with diploma programs students can follow.”

But such diplomas do not get much respect from employers, said Julius Mandlazi, a 22-year-old student who was among those who lined up to try to apply at the University of Johannesburg. He had failed to win admission on his first try and attended a training college to earn a diploma, he said. But he has had little luck finding a good job with that qualification.

“Companies don’t hire us with an F.E.T. diploma,” he said.

Mr. Mandlazi said that he wanted to earn a bachelor’s degree in mechanical engineering and that he had lined up in the predawn hours to try to secure a spot, but was far enough back to escape injury in the stampede.

“People just tried to jump the gate,” he said. “It was crazy.”

The university’s vice chancellor, Ihron Rensburg, struggled to explain how the situation had deteriorated so quickly.

“When we opened the gates this morning, we had this unfortunate, this very sad situation, where there was simply an unbearable crush on the front entrance,” Mr. Rensburg told reporters at a televised news conference.

Katleho Mphatsoe, an 18-year-old student from Soweto, arrived at 4:30 a.m. to try to register for an accounting degree.

“They were pushing and pushing,” Ms. Mphatsoe said. “Even the gates fell over. Many people were injured.”

Under apartheid, higher education for black South Africans was tightly controlled, and blacks were restricted from many forms of skilled employment. The University of Johannesburg was formed in 2005, when the once all-white Rand Afrikaans University was merged with two other schools.