By LYDIA POLGREEN
Published: February 28, 2013
JOHANNESBURG — The footage is shaky but unmistakable. A slender black man dressed in a red T-shirt, black pants and sneakers is tied to the back of a police truck. He kicks. He writhes. The vehicle pulls away, dragging the man behind it. Police officers run along with him. Cellphone cameras snap away.
“What did he do?” bystanders shouted.
“It was him who started it,” a police officer replied.
Late Tuesday night, the man, who has since been identified as Mido Macia, 27, a taxi driver from Mozambique, died of head injuries at the Daveyton Police Station, 27 miles southeast of here.
In South Africa, where violent crime, vigilante attacks and police brutality are daily fare, the video, captured on a cellphone and first published by The Daily Sun, a local tabloid, has incited outrage for its brazen and outsize cruelty.
“We come across a lot of cases of police brutality,” said Moses Dlamini of the Independent Investigative Directorate, which investigates police crimes, in a television interview. “The police don’t even care that people are watching.” 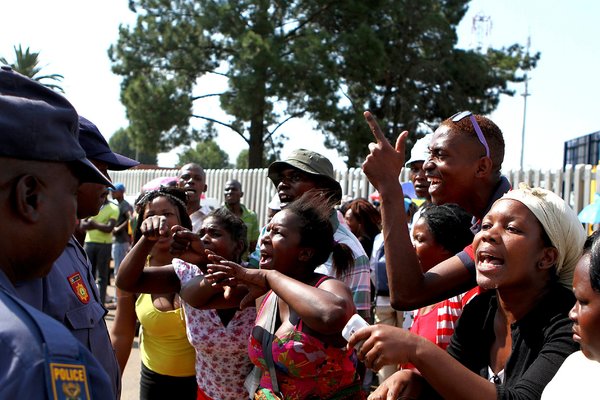 Protesters gathered outside the Daveyton Police Station, where a man who was dragged died of his injuries, on

For many, the video was a reminder of the harsh treatment meted out to black citizens by white policemen under apartheid, when South Africa’s police force was notorious for its harsh tactics against the country’s black majority.
“If this was apartheid Police we’d riot,” wrote Zackie Achmat, a prominent social activist, on Twitter.
Back then, the officers were likely to be white and at the command of a racial dictatorship. Now they are almost entirely black, serving a democratically elected government.
Under apartheid, more than 70 percent of police stations were in white areas despite the fact that whites were less than 20 percent of the country’s population. The job of the white-led police was clearly to protect whites from blacks, said Gareth Newham, an analyst at the Institute for Security Studies and an expert on policing in South Africa.
After 1994, when apartheid ended and the African National Congress was voted into power in the country’s first fully democratic elections, reforming the police force was a top priority. Millions of dollars were spent on cashing out apartheid-era officials and recruiting new members to the force. Its emphasis was supposed to shift from controlling black South Africans to serving them.
But a fierce crime wave washed over South Africa in the years after apartheid. Violent crime increased by 22 percent. Murder, carjackings and armed robberies were endemic. South Africa’s reputation suffered.
The government, under intense pressure to clamp down on crime, enacted tough new policies. Huge recruitment drives added 70,000 officers and administrators to the force. 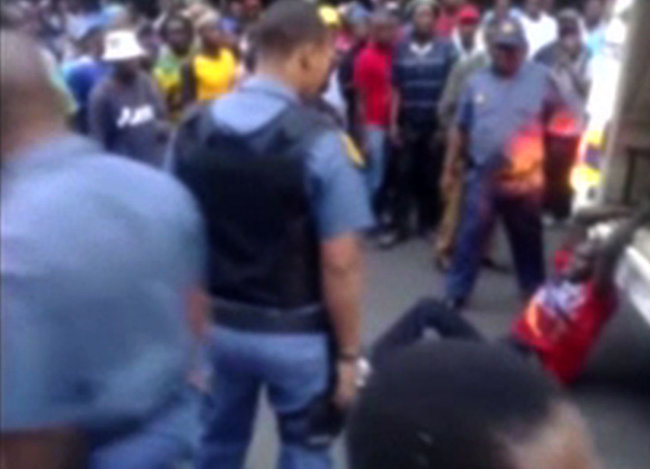 A video released by The Daily Sun showed the man, a taxi driver from Mozambique, handcuffed to the back of a police van.

“You have thousands of people coming in, so the standard for recruitment dropped,” Mr. Newham said. “Training dropped from two years to one. You can’t do proper vetting.”
Supervisors found they were responsible for twice as many officers, many of them inexperienced and poorly trained. Discipline suffered.
Meanwhile, the national political debate around crime became more heated. In 2008, the deputy police minister, Susan Shabangu, exhorted the police to use maximum force in a speech at an anti-crime rally in the capital, Pretoria, telling them, “they have permission to kill these criminals.”
Her remarks courted controversy, but they were widely praised.
“I want no warning shots,” she said. “You have one shot and it must be a kill shot. If you miss, the criminals will go for the kill. They don’t miss. We can’t take this chance.”
She went on: “The Constitution says criminals must be kept safe, but I say no! I say we must protect the law-abiding people and not the criminals. I say that criminals must be made to pay for their crimes.”
Unsurprisingly, the number of people killed by the police skyrocketed. In 2005 and 2006, police shot and killed 281 people. Within three years, the number doubled.
The message went down through the ranks.
“You are expected to be tough, you decide who the criminals are, and you will not be held accountable,” Mr. Newham said.
The past year has been tough for South Africa’s troubled police force. In August 2012, officers opened fire on platinum miners engaged in a wildcat strike in the town of Marikana, killing 34 of them in the biggest mass shooting since apartheid ended.
The force suffered further embarrassment when one of its detectives, Warrant Officer Hilton Botha, bungled his testimony on the stand at the bail hearing for Oscar Pistorius, a track star who is charged with murdering his girlfriend, conceding several major errors. Officer Botha was removed from the case after it was revealed that he himself faces attempted murder charges.
Police officials promised a swift investigation. A press officer for Police Commissioner Riah Phiyega said that “the matter is viewed by the national commissioner in a very serious light and it is strongly condemned.”
And police brutality videos have surfaced in the past, an emblem of an era in which cellphones mean that digital material can be shared rapidly through social media. A 2011 episode in Vaalwater, a town in Limpopo Province, was also captured on a cellphone video, showing a police officer repeatedly kicking a man who appeared to be unconscious. In that case, the crowd seems to be egging on the officer.
“Hit him, but don’t kill him,” one bystander shouts.
“Someone is really getting the boot,” another says, chuckling.
A lonely female voice utters, “look at what is happening to God’s children.”
In the case of the dragged man, though, few of the bystanders appeared to support the police. A crowd of angry protesters gathered at the Daveyton Police Station on Thursday, demanding that the officers be prosecuted.
“They killed one of our brothers like he was a dog,” said one woman, speaking to a reporter of ENCA, a local news channel.