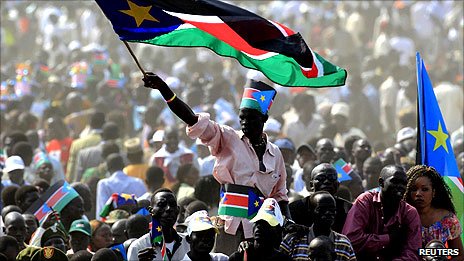 The young nation of South Sudan has chosen English as its official language but after decades of civil war, the widespread learning of English presents a big challenge for a country brought up speaking a form of Arabic.

I knew there might be problems as soon as I arrived at Juba International airport – and was asked to fill in my own visa form, as the immigration officer could not write English.

The colourful banners and billboards hung out to celebrate South Sudan’s independence back in July, and still adorning the streets now, are all in English. As are the names of the new hotels, shops and restaurants.

After decades of Arabisation and Islamisation by the Khartoum government, the predominantly Christian and African south has opted for English as its official language.

At the Ministry of Higher Education, Edward Mokole, told me: “English will make us different and modern. From now on all our laws, textbooks and official documents have to be written in that language. Schools, the police, retail and the media must all operate in English.” 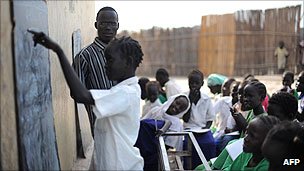 This was “a good decision for South Sudan”, he added forcefully, rather playing down the fact that there are very few fluent English speakers in the country.

As a devastated country of remote villages and mainly dirt roads, with no industry, banks or landlines, with erratic electricity and connectivity, where 85% of people are illiterate and the education system is shattered, South Sudan does not just have very little English, but very little written language at all.

I visited schools without textbooks.

The head of English at Juba University had no books in his office, let alone electricity or a computer.

I saw no bookshops.

For the new rulers, who fought with the Sudan People’s Liberation Army, learning English is a new struggle.

“With English,” the news director of South Sudan Radio, Rehan Abdelnebi, told me haltingly, “we can become one nation. We can iron out our tribal differences and communicate with the rest of the world.”

But peace is still fragile.

The whole of Sudan is riddled with conflicts. About 150 different languages are spoken in the South and there are thousands of guns out there, as well as a quarter of a million former guerrillas being demobilised and disarmed.

There are soldiers everywhere in Juba.

But there are also traders from Uganda and Kenya, as well as about two million returnees from the north, refugees and thousands of Westerners seeking fortunes or bringing aid.

I met the new British Council director in his office – in the grounds of a notorious nightclub (the club had free office space, and in Juba you take what you get).

After 65 years operating in Sudan, the council appointed Tony Calderbank to oversee the spread of English in the new nation.

Wherever Tony went, I saw people approach him, desperate for courses, books, teachers and grants.

“English has become a tool for development,” Tony told me, “and, even if the British in Sudan are sometimes seen as colonial overlords, the English language is respected.”

Brigadier-General Awur Malual had asked the British Council to teach his soldiers.

The general had grown up speaking his tribal tongue Bor and Juba Arabic, a colloquial form of Arabic, but can now speak remarkably good English.

When I asked him how he had learned it, he told me: “By picking up books in the bush when I was fighting. I read some things about that man Shakespeare.”

“What about Dickens or Jane Austen?” I asked. He scratched his head and said: “I don’t know them.”

I promised to send the general some Dickens.

During my time in Juba, several people asked me for books – a dictionary of law and biographies of Nelson Mandela and Barack Obama – black leaders who, for them, inspire hope.

Already, I have put copies of Shakespeare’s Cymbeline in the post.

Next year, as part of the 2012 Olympics arts programme, the South Sudanese Kwoto Theatre Company is to perform this tale of love, death and war in Juba Arabic at the Globe theatre in London.

Thirty-six other Shakespeare plays in 36 other languages will also be staged.

As we swatted flies down by the Nile, I asked Kwoto’s director, Derik Alfred why he was swimming against the tide – why not Shakespeare in English?

“We must still celebrate our own language,” he told me mischievously, “but first of all we have to translate Cymbeline from English into Juba Arabic!”