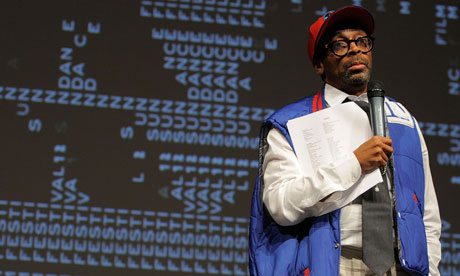 Spike Lee opted not to introduce his film “Red Hook Summer” before its Sundance premiere on Sunday, but he sure knew how to finish the screening with a bang.

In an expletive-laced Q&A, the veteran filmmaker said that Hollywood executives know nothing about black people and that he wanted the audience to spread the word that the film “is not a motherfucking sequel to ‘Do the Right Thing.'”

(It is set in the same Brooklyn neighborhood as that film, and includes Lee reprising his role as Mookie, a pizza delivery guy who services the Red Hook projects.)

Lee also looked into the audience and said, “Is Brooklyn in the house? We doubled the black population of Utah, maybe tripled it, up in this room!”

And it was Rock who set Lee off on the night’s biggest fireworks. After Lee talked about how the movie had been shot in 19 days within a 10-block area of Brooklyn, the comedian and actor stood up and asked a question.

“OK, so you did it. You spent your own money, right?” he said. “What would you have done differently if you’d actually gotten a bunch of studio money? What else would have happened? Would you have blown up some shit?”

Lee immediately jumped on the question, insisting that he already told Rock in a private conversation why he had no interest in asking for studio financing.

“We never went to the studios with this film, Chris,” he said. “I told you, we’re gonna do this motherfucking film ourselves! The plan was to make the film, bring it to Sundance, and … “

He stopped, looked over at Sundance chief John Cooper and quickly corrected himself. “Sorry, John, we were gonna show it to you first,” he said, backtracking from the implication that Sundance would have taken anything Lee gave them.

And then he waded back into the fray. “I didn’t want to hear no motherfucking notes from the studio telling me … about what a young 13-year-old boy and girl would do in Red Hook. Fuck no.

“They know nothing about black people. Nothing!”

After a few more minutes of ranting that included slaps at Universal Pictures for not green-lighting the sequel to “Inside Man,” he stopped. “Sorry for that motherfuckiing tirade,” he said.

In truth, though, the tirade was more focused and powerful than the film. “Red Hook Summer” is confounding, divisive and messy. It’s a lament disguised as a comedy that turns into a brutal drama and ends up as an epic.

Its best moments are laced with a profound sorrow over the state of the country, but it also bogs down in endless monologues and sermons and awkward scenes between two teenage actors.

And late in its 130-minute running time, a shocking revelation about a central character nearly upends the entire movie and overshadows everything else in the story, which ostensibly focuses on a young boy who is brought from Atlanta to Brooklyn to spend the summer with his grandfather in the Red Hook projects.

Within half an hour of its conclusion, Twitter reactions included “Spike Lee’s most powerful … film in years,” “his most interesting/ambitious film in years,” and at least two people calling it “one of the worst movies to ever premiere at Sundance.”

That’s probably overstating the case – and even if you couldn’t stand the film, you had to admit that it was one of the festival’s most entertaining Q&As.