RALEIGH (WTVD) — Roman Caple will be the first in his family to graduate college, but unless something changes, he won’t be walking with his classmates.

He says he doesn’t know why, so he asked the ABC11 Eyewitness News I-Team for help. 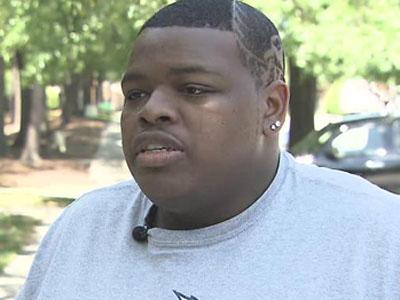 “For me to get this far, this far, and somebody tells me no because of something that I said on my Facebook page,” Caple said. “Something I said on my page, for them to tell me no. It hurt. It hurt.”

The tears came late in the conversation, long after the Saint Augustine’s College senior gave the I-Team his back story. He says Wednesday he learned he wouldn’t be allowed to walk at his graduation this weekend from the vice president of student affairs.

“He told me that it was based on a Facebook post that I posted on my page about the college that jeopardized the integrity of the college,” Caple said.

The senior says he was given a letter, which alludes to a “negative social media exchange” after a tornado tore through the college 12 days ago. Caple does have a Facebook account and he wrote a lot after the storm. Most of it like the following posts:

“We all need to set our differences aside and help one another,” he posted. “Falcons we will continue to fly high because that’s what we do. Help your neighbor, if need be, Falcons are one. I love St. Augs.”

And by all indications he does.

“I was in the band, I was in the choir, I played tennis for three years,” Caple explained. “I mean, I have the Falcon cut in the side of my head. Who does that? I’m the biggest fan that you can have.”

So, what was so offensive to the college?

“Here’s the post that I believe they are referring to as to being putting this college in a negative light,” he said. “It says ‘St. Augs is holding classes tomorrow and students in Falcrest still don’t have power. Like, wtf. Really? #dumb.”

That was all the I-Team could find, but we can’t be sure. The college hasn’t told Caple and won’t tell us exactly what it was that led to him being prohibited to march.

“I feel like it’s a personal issue that they have with me because as I said, if they’re basing it on my Facebook post, as you saw, there was nothing on there that was negative,” he said. “In my opinion. In their opinion, it might be different, but they haven’t proven to me in anything in writing or anything that that’s the case.”

The college offered a two line statement that reads, “As written in our Code of Conduct, Saint Augustine’s College students are expected to support the College’s mission. The College reserves the right to take appropriate actions when student conduct conflicts with the institutional mission.”

What do you think about St. Augustine’s decision? Should the school have to be more specific about their reasoning for not letting someone march in the graduation ceremony?