Watch the video from National Geographic about these stone complexes.

The Stone Circles of Senegambia are the largest group of megalithic complexes yet recorded in any region of the world. There are 1,053 Stone circles and a total of 28,931 monoliths. Their quality suggests sophisticated stone working traditions. All circles are found near to burial mounds. Their date and purpose are still a matter of debate. The 8 to 14 stones in each circle vary in size up to ten-ton stones, from 1 to 2.5 metres high and are generally of laterite.
The stone circles lie in Gambia north of Janjanbureh and in central Senegal. Four separate locations were chosen to represent the complex:
– Kerbatch Central River Division (Gambia)
– Wassu Central River Division (Gambia)
– Sine Ngayène Kaolack (Senegal)
– Wanar Kaolack (Senegal)
http://www.worldheritagesite.org/sites/stonecircles.html

The Senegambian stone circles lie in Gambia north of Janjanbureh and in central Senegal. Coordinates: 13° 41 N – 15° 31 W.
Approximate area: 15,000 square miles (39,000 km²). They are sometimes divided into theWassu (Gambian) and Sine-Saloum (Senegalese) circles, but this is purely a national division.
The stones were erected around the eighth century on top of earlier graves. The ten to twenty-four stones in each circle vary in size up to ten-ton stones, from 1 to 2.5 metres high and are generally of laterite. The stones mark burials and were erected before the twelfth century. There are around 1,000 stone circles, the biggest concentration being more than 1,000 stones in fifty-two circles at Djalloumbéré and those around the village of Wassu, which has a museum devoted to them. One notable circle is actually a V formation. Traditionally, for unknown reasons, people leave small rocks on the stones. The use to which the stones were put is not clear but recent excavation work (2006), reported by theNational Geographic Society, suggests a funerary purpose given the large number of human remains found at the sites. Archaeologists at the site are pursuing the theory that different parts of a body were buried at different sites and at different times. 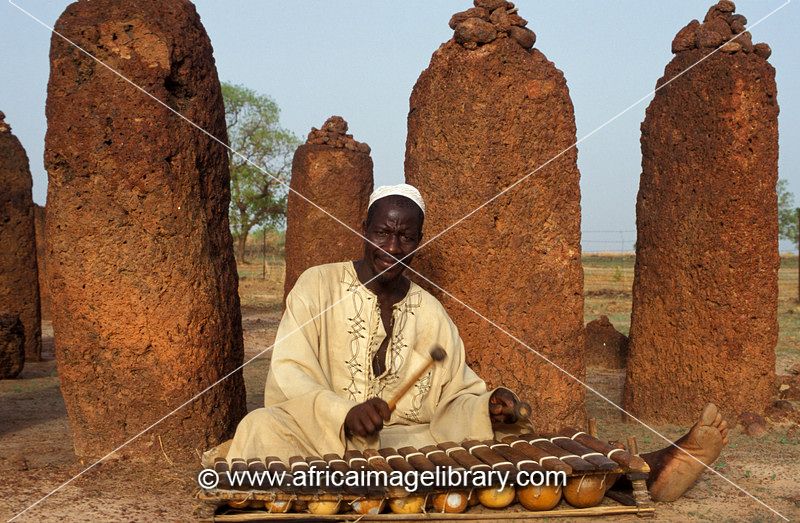 On 21 July 2006, the stone circles were added to the World Heritage List. They are described by UNESCO as :

These megaliths were built by the ancestors of the Serer people or the Jola.  The stones are believed to have parallels with the steles of Roog (the supreme deity in Serer religion) built by the ancient Serers in veneration of their god.  The steles of Roog represents the axis of the world in Serer cosmogony.  They are arranged according to the tenets of Serer religious symbolism, and form part of some of the most sacred Serer sites.  Scholars like Henry Gravrand as well as Cheikh Anta Diop (who among others referred to it as the Serer cult of upright stones ) notes that, the steles of Roog are still built by modern day Serers though in a much smaller scale i.e. in people’s homes.

The site consists of four large groups of stone circles that represent an extraordinary concentration of over 1,000 monuments in a band 100 km wide along some 350 km of the River Gambia. The four groups, Sine Ngayène, Wanar, Wassu and Kerbatch, cover 93 stone circles and numerous tumuli, burial mounds, some of which have been excavated to reveal material that suggest dates between 3rd century BC and 16th century AD. Together the stone circles of laterite pillars and their associated burial mounds present a vast sacred landscape created over more than 1,500 years. It reflects a prosperous, highly organized and lasting society.

The inscribed site corresponds to four large groups of megalithic circles located in the extreme western part of West Africa, between the River Gambia and the River Senegal. These sites, Wassu, and Kerbatch in Gambia, and Wanar and Sine Ngayene in Senegal, represent an extraordinary concentration of more than 1,000 stone circles and related tumuli spread over a territory of 100 km wide and 350 km in length, along the River Gambia. Together, the four groups comprise 93 circles and associated sites, some of which have been excavated, some of which have revealed archaeological material and human burials, from pottery to iron instruments and ornamentation dating between the 1 st and 2nd millennia to our era. These four megalithic sites are the most dense concentration in the zone and have Outstanding Universal Value, representing a traditional monumental megalithic construction spread out over a vast area, with more than 1,000 stone circles scattered along one of the major rivers of Africa.


The Sine Ngayene complex (Senegal) is the largest site in the area. It consists of 52 circles of standing stones, including one double circle. In all, there are 1102 carved stones on the site. Around 1km to the east, (outside the inscribed property) is the quarry from which the monoliths were extracted and where the sources of around 150 stones can be traced. The site was excavated around 1970, and more recently by Bocoum and Holl. The work established that the single burials appeared to precede in time the multiple burials associated with the stone circles. The Wanar complex (Senegal) consists of 21 circles including one double circle. The site contains 9 ‘lyre’ stones or bifed stones, sometimes with a cross piece strung between the two halves. The Wassu complex (Guinea) consists of 11 circles and their associated frontal stones. This site has the highest stones of the area. The most recent excavations conducted on these megalithic circles date to the Anglo-Gambian campaign led by Evans and Ozanne in 1964 and 1965. The finds of burials enabled the dating of the monuments between 927 and 1305 AD. The Kerbatch complex consists of 9 circles, including a double circle. The site possesses a ‘bifid’ stone, the only known one in the area.
The stones forming the circles were extracted from nearby laterite quarries using iron tools and skilfully shaped into almost identical pillars, either cylindrical or polygonal, on average around 2 m in height and weighing up to 7 tons. Each circle contains between eight to fourteen standing stones having a diameter of four to six metres. The four megalithic sites inscribed bear witness to a prosperous and highly organized society with traditions of stone circle constructions, associated with burials, and persisting in certain areas over more than a millennium.
Criterion (i): Individual stones finely carved bear witness to an exact and experienced technique and contribute to the organized and imposing size of the stone circle groups.
Criterion (iii): The circles of stones proposed for inscription represent the totality of the megalithic area in which the presence of such a large number of circles is a unique manifestation of construction and funerary practices which persisted for over a millennium across a large geographical area and reflecting a sophisticated and productive society.

The integrity of the four components of the site can only be evaluated as part of a much wider unified cultural complex. The complexes conserve their integrity in terms of spatial associations of the component circles, individual megaliths and tumuli. The spiritual beliefs associated to the stones by local communities help to protect their integrity.

The stone circles stand in a farmed landscape and there have been few interventions. A very small number of stones have been removed. Some burial sites have been excavated and subsequently back-filled. These disturbances remain minimal. The overall authenticity of the four sites is intact.

In Gambia, management of the of the two sites (Wassu and Kerbath) fall under the responsibility of the National Centre for Arts and Culture (NCAC) in accordance with the law promulgated by the National Assembly (NCAC Law of 1989, amended in 2003). The NCAC is the dismantled technical section of the Ministry of Tourism and Culture. The daily management of the sites is under the responsibility of the Directorate for Cultural Heritage of the NCAC that employs, on a permanent basis, the caretakers and maintenance staff. Both sites have a management plan prepared during the nomination process with participatory cooperation of local communities and their representatives. The two sites are fenced and four thatched round buildings, built in the manner of traditional houses, serve as a museum, visitor reception facilities and lodgings for the caretaker. The NCAC has support from local management committees that ensure the interests of the community in the sites. Funding is principally provided by Government revenue from visitor entrance fees and other subventions.

In Senegal, the two sites enjoy legal protection: Law No.71-12 of 25 January 1971, regulating the regime for historical sites and monuments and excavations and finds/ Decree 73-746 of 8 August 1973 promulgating the law. The Directorate of Cultural Heritage of the Ministry is responsible for the management of the sites. The communities also have extended powers through the Law on decentralization facilitating their involvement in the management of the sites. The funding sources are: the State budget, local communities and donor subventions.  These funds have enabled the fencing of the two sites, the construction of a hall (Wanar) and a welcome space (Sine Ngayene), visitor sanitary facilities as well as the funding of two full-time caretakers. Good signposting was installed to access the two sites as well as an interpretation centre at Sine Ngayene. In the long-term, improvement to the access paths is foreseen in the presentation framework.
The management plan was prepared in consultation with the Senegalese and Gambian stakeholders meeting in Wassu in Gambia and Ngayene in Senegal in December 2004.
The long-term objective of this action plan is to render the site visible, accessible and ensure economic benefits for the local communities. Beyond the conservation and enhancement of the sites, the management envisages conducting in-depth research and enable the sites to be better adapted to the development objectives at the national level.

Although the stone circles have been the subject of research over the past 100 years, and several parts of the nominated site have been excavated, more could be elucidated about the megalithic zone as a whole.
Material from excavations suggests that the burials took place mainly during the first and early second millennia AD. However the relationship between the burial mounds and the stone circles has yet to be fully ascertained. It is not clear whether the burials pre-date the circles, whether they are contemporary or whether perhaps the circles pre-date the burials.
The excavations by Tholmans et al were published in 1980 and those by Galley et al in 1982. Excavations were restarted by Lawson in the Gambia in 2002 and by Hall and Bocoum in 2001-2004 in Senegal.
Some of the quarry sites have been identified, although none are in the nominated area. However only a very small proportion of the megaliths can be traced to a source.
The burials that have been excavated appear to reveal a less ordered regime. They show mass burials with bodies thrown haphazardly into graves, suggesting either an epidemic or some sort of sacrifice.
The Manding people who currently live in much of the megalithic zone seemed to have moved into the area in the 16th century, after the construction of the megaliths, and so do not appear to be related to the megalith builders.
Source: Advisory Body Evaluation

Scramble for Africa: How the African continent became divided