Masakazu Hamasuna/Yomiuri Shimbun Correspondent
UNIO DES PALMARES, Brazil—More than 300 years ago, a charismatic leader fought for the freedom of black slaves in 17th-century Brazil, which was then a Portuguese colony. He led Palmares, a community of escaped black slaves, and fought to the death against the white soldiers of the colonial government.
His name was Zumbi, and he was said to be a descendant of African royalty. Ultimately killed in battle, he is still admired today as a hero who fought for freedom.
The city of Unio des Palmares is about 1,500 kilometers northwest of Brasilia, in Alagoas State. The inland city has a population of about 60,000, many of whom work in sugar cane farming and cattle production. If you drive along a rocky mountain road for about 40 minutes from the city center, you will reach the former site of Macacos, a base used by Zumbi for his resistance.
From the former site 580 meters above sea level, which has been developed as a park, you can see the entire hilly region.
“When I was a child, elderly people used to tell me that this is where Zumbi battled to the end,” said Claudio Henrique, a 24-year-old forest ranger who was born and raised in the town.
The 16th and 17th centuries are called the “sugar era” in Brazilian history, after the sugar cane plantations that brought enormous fortunes to its white colonizers. However, their wealth was sustained by the inhumanely hard labor of African slaves.
Unable to endure being treated like cattle, some of the slaves escaped from their owners and established villages. One of the most prosperous of these communities was Palmares, an alliance of over 10 villages with a total population that peaked at 30,000. By sharing land and farming crops, residents of Palmares enjoyed freedom and a self-sufficient life.

Masakazu Hamasuna/The Yomiuri Shimbun——Edson Bezerra, a keeper of oral history about Zumbi, and his son Victor

The colonial government would not tolerate such a community. Around 1670, the government started dispatching punitive forces again and again, and eventually conquered Macacos in 1694.

Edson Bezerra, a 47-year-old keeper of oral history that has been handed down for generations in the community, said: “Wounded, Zumbi escaped from the attack and planned to make a comeback. However, the Portuguese Army caught Zumbi with help of traitors within Palmares and killed him. His head was preserved with salt and put on display at a plaza in Recife, a major city near Palmares, for eight days as a lesson to others.”
It was the end of the “black kingdom.”
However, in the late 1970s, long after his demise, Zumbi was revived as an icon for black activists who protested against racial discrimination.
“Zumbi, who fought against slavery, has become a source of self-esteem for African-Brazilians,” said Ivanir dos Santos, 47, a leader of black activists in Brazil. In 1985, the Brazilian government designated Macacos as a national historic site, and in 1995 memorial events were held across the nation to mark the 300th anniversary of Zumbi’s death. In addition, Nov. 20, the day of his death, has been designated as “Black consciousness day” and many local governments have made it a holiday. 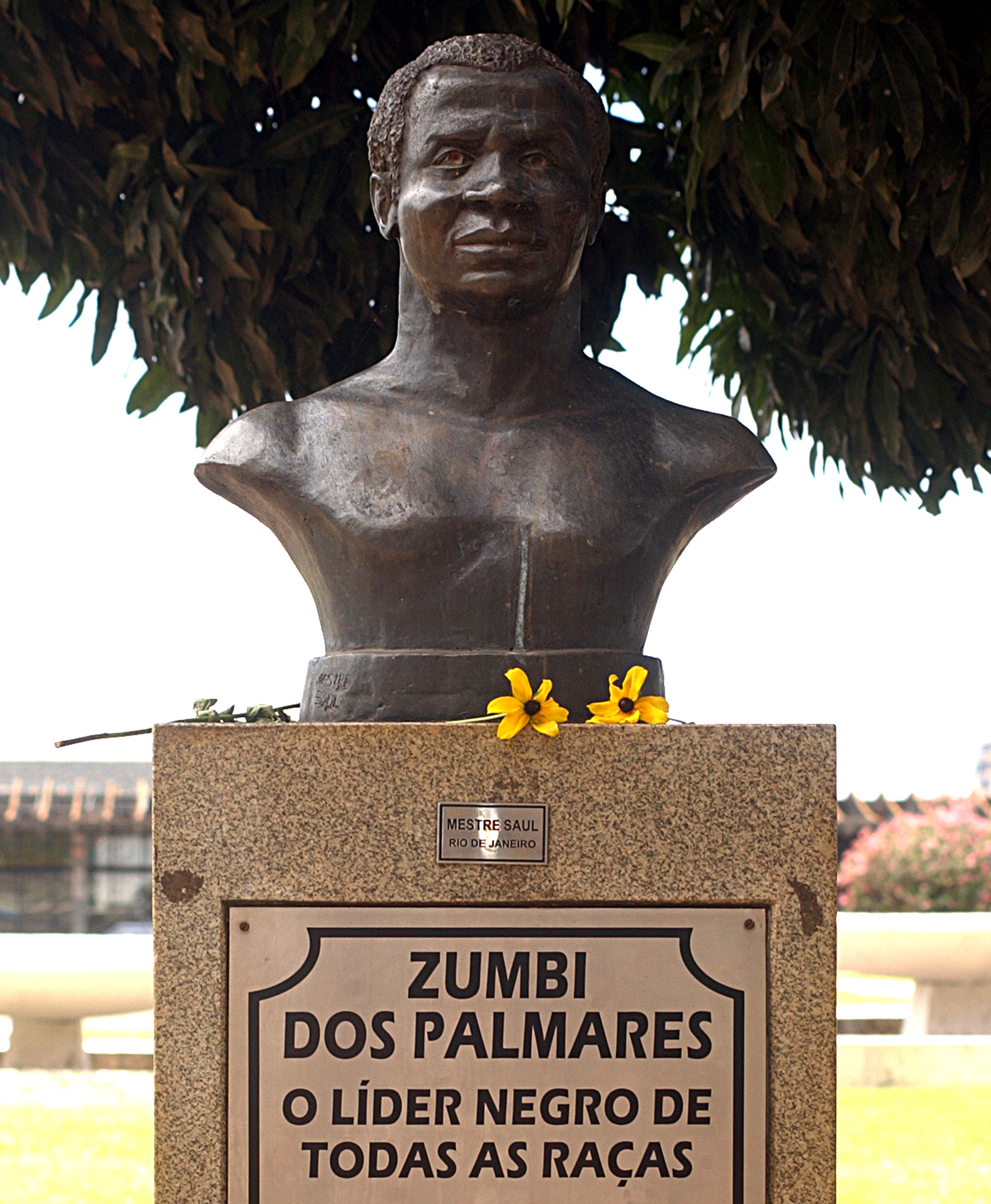 
Lingering discrimination
Racial discrimination still continues in Brazil today. An African-Brazilian judo wrestler who underperformed at the 2012 London Olympics was criticized online as being inferior because she was black.
Maria Jose, a 38-year-old executive of the foundation that manages the Macacos site, stressed: “That’s why it’s so meaningful to learn from Zumbi, who fought bravely against racism. Zumbi still encourages us.”

Hamasuna is a correspondent in Rio de Janeiro.

Zumbi is believed to be the last leader of “Palmares,” a nation formed in northeastern Brazil by escaped black slaves. While details of his life, including his birthday, are still unknown, Zumbi is widely thought to have been born in Palmares around 1655. He was a nephew of Gangazumba, whom he succeeded as leader of Palmares.
Zumbi was said to be a tall and intelligent man who could understand Portuguese and Latin, which he learned from a Catholic missionary. His charismatic leadership is said to have made his followers believe he was immortal.

The Great Escape From Slavery of Ellen and William Craft