By ELIZABETH LORANG and R. J. WEIR   September 27, 2013, 2:43 pm
Near the end of April 1863, on the eve of the first muster of African-American regiments in the North, William Slade, the head servant in the White House, sent Abraham Lincoln a petition from Washington’s black community recommending officers for the district’s first regiment of black troops. Sixty-seven men signed the petition, addressed to Secretary of War Edwin M. Stanton, including members of the Israel Lyceum of Washington City, an African-American debating society. A letter from Slade to Lincoln accompanied the petition, acknowledging that he and the other men wanted Lincoln to see the petition at the “earliest practicable moment.”
Slade was an important presence in the Lincoln White House. He served as a personal messenger to Lincoln during this period, according to Elizabeth Keckley, Mary Todd Lincoln’s dressmaker and Slade family friend. Slade’s children played with Tad Lincoln in the White House.
Slade was also a prominent black leader in wartime Washington. He presided over the Social Civil and Statistical Association, an African-American civic organization, and he was an elder in the 15th Street Presbyterian Church. Both Slade and his wife, Josephine, worked for the Contraband Relief Society throughout the war and provided aid to fugitive slaves from the Confederacy who had gathered in camps in and near the city.
Like Lincoln, Slade was known for his sense of humor and ability to tell a story. Echoing the president’s reputation for homespun humor, Slade reportedly had some jokes that “could make a horse laugh.” And like Lincoln, who penned a short verse on Gen. Robert E. Lee’s invasion of the North in the aftermath of Gettysburg, Slade wrote at least one poem during the Civil War, in the summer of 1863. Slade’s poem added to the compelling literary narrative being written by African-Americans during the war — one that has gone virtually unremarked in literary histories. 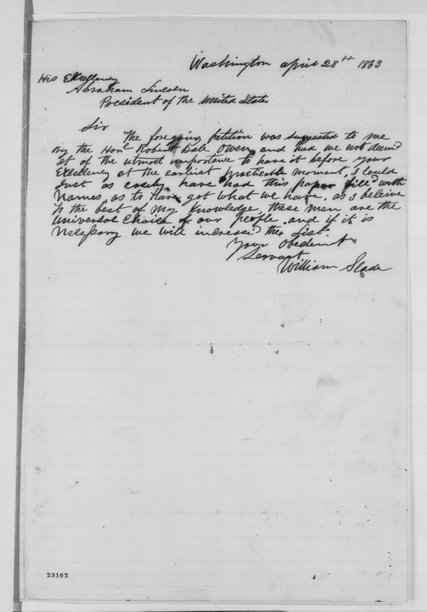 Lincoln and Slade were not alone in their taking to poetry during one of the most tumultuous periods of the Civil War. In fact, poems were so ubiquitous in the everyday experience of the war that the recruiting calls for “300,000 more” might as well have described, with little hyperbole, the number of poems on the move as much as the number of troops being raised. Poems were written, published, reprinted, saved and circulated by men and women, children and adults, soldiers on the battlefront and family members at home. In this cultural landscape, only a minuscule fraction of the poems were written by the likes of Herman Melville and Walt Whitman.
William Slade’s poem, “The Slave to His Star,” appeared in the New York-based weekly newspaper The Anglo-African on Sept. 19, 1863. The paper was one of the most important in black New York. Thomas Hamilton launched the original Weekly Anglo-African at No. 48 Beekman Street in Manhattan in 1859. Facing financial pressures, he sold the paper to James Redpath almost two years later, in March 1861. Under Redpath, the newspaper — subsequently retitled the Pine and Palm — became a propaganda sheet for the Haytian Bureau of Emigration. Dismayed with this turn in events, Hamilton’s brother, Robert, determined to re-establish The Anglo-African as a newspaper “devoted specially to the best interests of the colored people in this and other countries.” The revitalized Anglo-African was published for the first time on July 27, 1861.
As editor Robert Hamilton regarded verse as an important tool for communication and community building, and most issues of The Anglo-African featured multiple poems. Contributions came from blacks as well as whites, and John Greenleaf Whittier was only the most prominent antislavery poet to appear in the pages of The Anglo-African, which reprinted his poems from other newspapers and magazines — a standard practice of the period. One of the newspapers from which The Anglo-African most routinely borrowed verse was The National Anti-Slavery Standard, located, during the war, with The Anglo-African on Beekman Street.
The Anglo-African, however, also featured many original poems written expressly for it. Contributors of original poems included John Willis Menard, an African-American clerk in the federal Emigration Office; Fanny M. Jackson, a former slave from Washington, freed when she was a young girl, and a student at Oberlin College during the war; Pvt. Francis Myers, a member of the storied Massachusetts 54th Regiment; and “EBED,” who remains unidentified and whose work is representative of the many pseudonymous and anonymous original poems to appear in the paper.
Slade’s poem, “The Slave to His Star,” is an ode to the North Star, the celestial compass that guided runaway slaves to the free North under the cover of night, written in the voice of a slave who has made the journey from bondage to freedom. Well before Slade wrote his poem, the North Star had emerged as a powerful symbol in antebellum antislavery literature. In 1840 the abolitionist poet John Pierpont wrote “The Fugitive Slave’s Apostrophe to the North Star,” and in 1848 the former slave William Wells Brown included an anonymous piece titled “The Slave Holder’s Address to the North Star” in “The Anti-Slavery Harp: A Collection of Songs for Anti-Slavery Meetings.” “The Slave Holder’s Address” tellingly identified the North Star as the “Abolition star.” In recounting his escape from slavery, Frederick Douglass told of his plan to “follow the guidance of the north star till we got beyond the limits of Maryland.” Douglass later named his first abolitionist newspaper the North Star.
Slade’s North Star is at once the star over Bethlehem that led the Magi to the infant Jesus and the pillar of fire that guided the Israelites out of bondage in Egypt. In equating slaves from the American South with the Israelites of the biblical exodus story, “The Slave to His Star” adopted another trope common to poems published within the abolitionist press. Slade’s ode also refers to the poem “Bright Star” by the English Romantic poet John Keats. Slade’s poem begins with the same words of address — “Bright star” — and by the end of the first stanza, Slade’s narrator describes his own star as “steadfast” (echoing Keats’s “would I were stedfast as thou art”). Both poems highlight the constancy and solitariness of their stars, but unlike Keats, Slade presents the North Star as a divine agent that assists his speaker. These resonances suggest Slade’s familiarity with Anglo-American poetic traditions. Combined with the very existence of “The Slave to His Star,” Slade’s poetic literacy raises the tantalizing possibility that he is the author of a more substantial body of poetry than this single poem now attributed to him.
“The Slave to His Star” appeared in The Anglo-African almost one year to the day after Abraham Lincoln issued his preliminary Emancipation Proclamation of Sept. 22, 1862. Both the preliminary and final versions of the Emancipation Proclamation declined to emancipate slaves in loyal border states, Tennessee and the occupied regions of Louisiana and Virginia. By foregrounding the North Star and the slave’s perilous journey north at this time, Slade’s poem may have reminded Anglo-African readers how much work remained to be done.

Watty Burnett: Considered one of the renowned roots reggae artists

Simeon Golar, Who Fought for Public Housing, Dies at 84

Warren County Landfill Protest of 1982: one of the 1st cases of environmental justice in the US