The ghosts of Auburn Avenue still haunt the storied Atlanta street where the Rev. Martin Luther King Jr was born and black wealth thrived for decades.

Today, the street is a shell of its former self, the bustling mix of banks, night clubs, churches, meat markets and funeral homes long gone, replaced with crumbling facades and cracked sidewalks.

Hundreds of thousands of people still flock to Auburn Avenue to see King’s birth home, the church where he preached, and the crypt where he and his wife, Coretta, are buried – all located along the street. But tourists have little reason to linger. 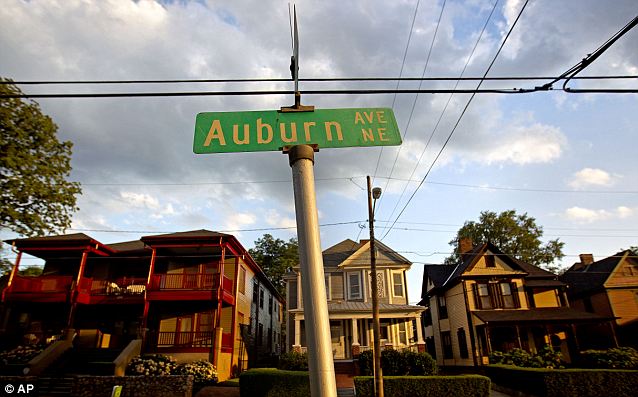 Homely?: The residential portion of the Sweet Auburn Historic District, including the home where Rev. Martin Luther King Jr was born at rear right 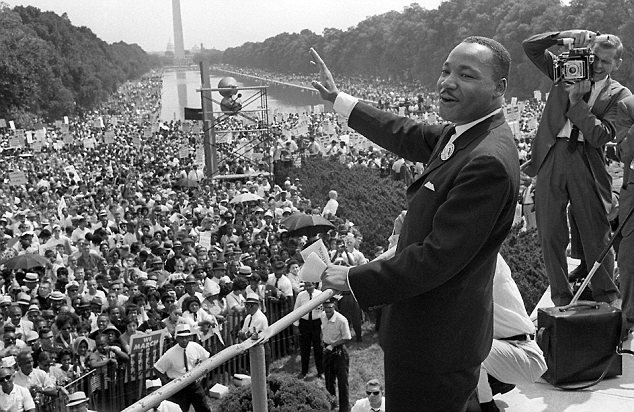 Icon: Reverend King grew up in the Auburn Avenue area, which has now fallen on hard times

While King’s legacy has been preserved, Auburn Avenue’s business community has never recovered from the exodus of the black community that supported it.

The situation represents a decades-old struggle to balance the need to honor the legacy of the neighborhood, while helping the area catch up to the booming development happening across much of the rest of the city.

This week, the Sweet Auburn Historic District was placed on the National Register of Historic Places’ 11 Most Endangered list for the second time since 1992 in an effort to spur preservation-oriented development and return the area to a semblance of its former glory.

Some say time may be running out.

‘If we lose any more historic fabric, Auburn Avenue will probably lose its historic designation. You can’t just have a few buildings left,’ said Mtaminika Youngblood, chairwoman of the Historic District Development Corporation, which has shepherded the restoration of the area for more than two decades.

Generations ago, much of Auburn Avenue’s prosperity was born out of necessity, a product of segregation. The downtown thoroughfare anchored a community of homes and businesses that depended on each other. 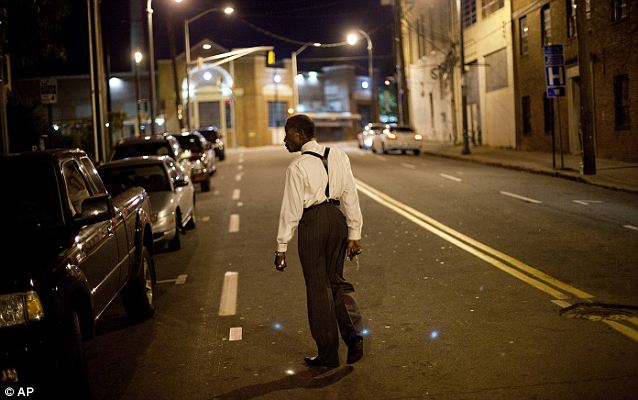 Begging: A man walks down the street after asking club goers for spare change in the Auburn Avenue district 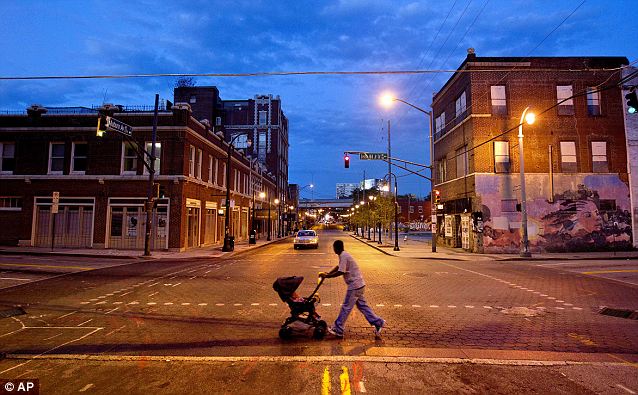 Downhill: Today Auburn Avenue is a shell of its former self, the bustling mix of banks, night clubs, churches, meat markets and funeral homes long gone, replaced with crumbling facades and cracked sidewalks 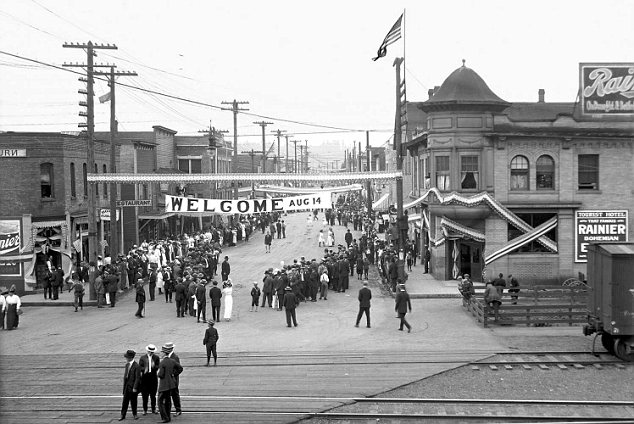 Contrast: The Auburn area decked out in all its finery for a festival in the early 20th century

The Atlanta Life Insurance Company was created when blacks had nowhere else to buy insurance. Mutual Federal Savings and Loan Bank was formed so black people could get mortgages.

It was a one-stop shop for the area, said Atlanta historian Herman ‘Skip’ Mason.

‘You can touch and see what businesses were there,’ Mason explained. ‘It goes without question that they’re worth preserving because of the history tied to the buildings and the street and what it meant. These historic buildings become living, tangible artifacts of black Atlanta.’

With the disappearance of Jim Crow, as blacks were able to move into different neighborhoods and patronize mainstream businesses, Auburn Avenue languished. Similar scenarios played out elsewhere as integration spread across the South, Youngblood said.

‘With desegregation came a one-way street. African-Americans could take advantage of the broader array of housing, services and businesses previously unavailable to them … but white people weren’t coming to Auburn to bank or shop or do anything.

‘In the face of all that, Auburn Avenue looks like you would expect it to look like,’ Youngblood said.

With no support or investment, the area began to decline.

Two decades ago, supporters stepped in to save the civil rights’ icon’s birth home and recreated much of the surrounding community. Today, the home, part of the King Historic Site run by the National Park Service, is a major American tourist attraction. It draws more than 700,000 visitors each year.

Many thought the retail recovery would be soon to follow. 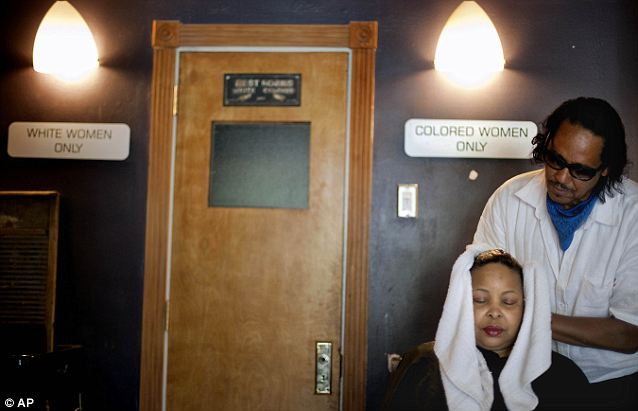 The curator of the Madame C.J. Walker Museum, an original beauty shop opened in 1950 by agents of the hair care entrepreneur, washes a woman’s hair 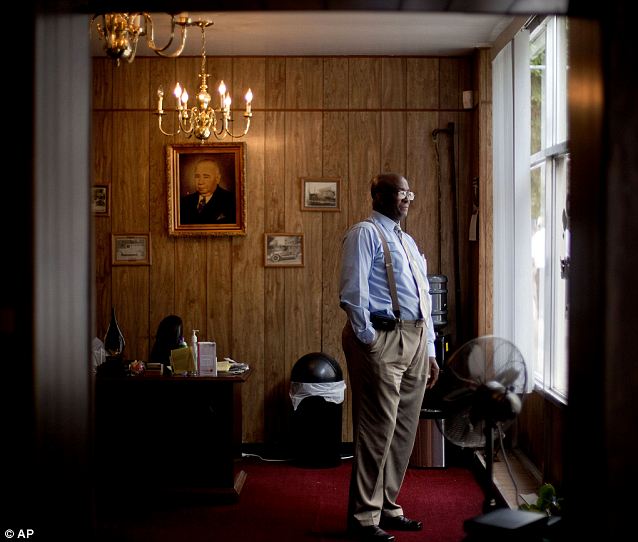 The combined legacy of what had been and the promise of what could be attracted Kwanza Hall to the neighborhood in 1999. He moved his wife and two sons into a house not far from where King was born. His father had worked with King during the civil rights movement, and Hall felt he had a stake in the area.

In 2005, he was elected to the Atlanta City Council to serve the district and has been a champion of its survival.

‘It is almost a travesty that we have not completed the Martin Luther King Jr. Historic District and restored it to a level that honors and reflects the level of commitment that he gave to humankind,’ Hall said.

‘It’s a puzzle that we have to put together. This is a special place, and we need to honor that legacy.’

Businesses that have long been loyal to the street have had a hard time surviving. The Atlanta Daily World, a black newspaper founded on Auburn Avenue in 1928, left its historic building four years ago after the structure was ravaged by a tornado in 2008.

Publisher Alexis Scott said her family held on for as long as they could, but they are now looking to sell the building.

‘It was sad to see it go into decline,’ Scott said of Auburn Avenue. ‘It was even more sad to look across the street and see the old buildings boarded up.

‘I don’t want to see the rest of the buildings fall down from disrepair and people’s inability to do anything about it. That was one of the reasons we were trying to sell our building.’

The Scott family’s attempt to sell earlier this year resulted in a backlash from the preservationist community, determined to save the building from demolition and development. They are still seeking a seller but also looking for another property on Auburn Avenue. 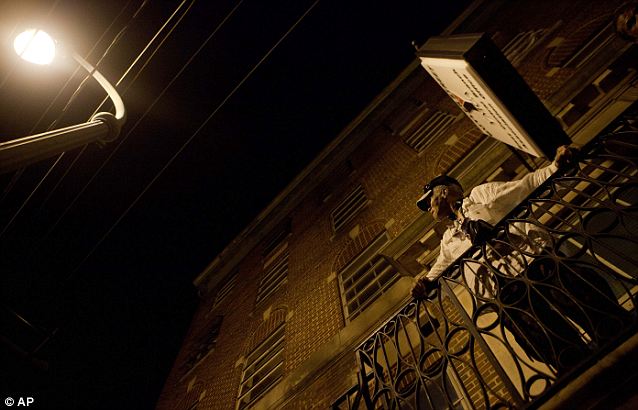 A resident stands outside the Butler Street YMCA, used in 1948 for Atlanta’s first black police officers to change into their uniforms as they weren’t allowed to use the police station 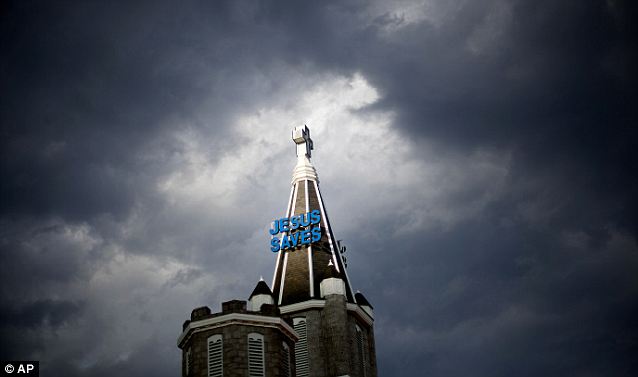 The historic Big Bethel African Methodist Episcopal Church, started in 1847 for slaves by their slave holders, stands along Auburn Avenue

‘It would be nice to be on the historic street,’ Scott said.

Answers are not always easy, and results have been mixed.

A live-work development built just before the recession failed to bring businesses back to the area. But down the street on neighboring Edgewood Avenue – which runs parallel to Auburn – popular bars and restaurants have sprung up in historic buildings, and a $47 million streetcar project is aimed at attracting more businesses and patrons to the area.

Georgia State University has expanded its urban footprint through much of the neighborhood and recently announced plans to buy two buildings owned by Atlanta Life.

But the original Atlanta Life building remains abandoned, boarded up and continuing to decline, a symbol of the stalled movement to fully restore Auburn.

‘It’s an embarrassment, frankly,’ said Youngblood. ‘Atlanta is the African-American city of the South, and we’ve done a really piss-poor job of preserving our legacy. But it takes leadership, political will, and resources. This is, I think, our last chance.’