By LAURIE KAMENS
PUBLISHED: 20:41 EST, 31 May 2013 | UPDATED: 11:23 EST, 1 June 2013
Critics are claiming that After Earth, the new action film starring father and son team Will and Jaden Smith, which had meager earnings at the box office, bears striking similarities to the teachings of Scientology.
The film opened to poor reviews and only earned $1M on opening night at the box office. 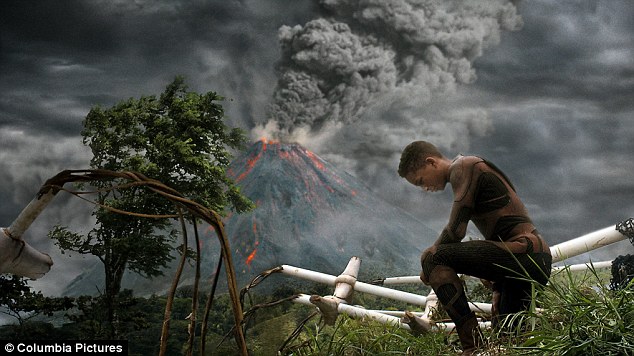 Critics have compared After Earth, starring Will Smith, to teachings of the Church of Scientology. The film’s final scene (pictured here) features a volcano erupting, an iconic image from the religion founder, L. Ron Hubbard’s book, Dianetics
After Earth, directed by M. Night Shyamalan, tells the story of General Cypher Raige (played by Will Smith) and his 13-year-old son Kitai (Jayden), who crash land on a Earth 1,000 years after it has been abandoned by the human race.

A former Scientologist gives his view

A former Scientologist Marc Headley reviewed the film for Hollywood Reporter and agreed that many of the themes are similar to Hubbard’s teachings.

Headley said he ‘escaped’ from the organization which he was a part of for 15 years in 2005.

After seeing the film he wrote for the magazine.

‘While most of the movie involves following Jaden Smith’s character as he faces off against apes, a large, angry bird and a leech, (none of which have much to do with Scientology — besides maybe the leech), most of the Scientology influences play out in the film’s dialogue.

‘Will Smith’s character, Cypher Raige, tells his son, Kitai: ‘Fear is not real. It is a product of thoughts you create. Now do not misunderstand me: Danger is very real. But fear is a choice’.

‘L. Ron Hubbard’s teachings insist that emotions and fear are triggers and are part of the reactive mind. Through Scientology, one is supposed to ‘rid oneself of your fears’….Besides the film’s dialogue and its direct similarities to Scientology teachings, there are also some other clues in After Earth that cannot be ignored.

‘The movie’s climax takes place on a volcano that could have been ripped right off the cover of Dianetics, the look is so similar. In Scientology, the volcano is a common thread through many different teachings.

‘Will Smith’s character is pretty much devoid of all emotions for the entire movie. While this may be part of his character or something that was directed in the script, in Scientology, one goes through great amounts of training and counseling to control one’s emotions and ‘mis-emotion’ as described by Hubbard.’

Now overrun by aliens who feed on fear, Kitai must fight through the planet’s dangerous terrain to find the wrecked ship’s rescue beacon and save his father who was wounded in the crash.
Several film critics have dissected the plot and found numerous similarities to the teachings of L. Ron Hubbard, the founder of the Church of Scientology.
The most glaring similarity is that the iconic image of a volcano erupting, featured on the cover of Hubbard’s Dianetics, is the final climactic shot of the film.
Delving deeper, critics cite the film’s value on the self, derived from Scientology, Vulture noted. One of Hubbard’s teachings was that people must set aside their doubts and conflicts and place unquestioned value on the self.
In the film Kitai is plagued by fear and self doubt as he travels through the alien terrain and tries to measure up to his General father. Conversely Cypher, the superior solider, is able to ‘ghost’ or suppress his emotions.

Cypher classically embodies Hubbard’s theory of ‘thetan,’ or the pure human soul unburdened by emotion, whereas Kitai is a ‘misguided theatan,’ struggling to escape his fear.
It is only as Kitai learns to overcome his emotions over the course of the film that he experiences a Scientological triumph of the self and success over the alien planet.
Critics also note the use of ‘auditing’ in the film, which is the Church’s practice of ridding its members of painful emotional memories. Scientology teaches that people are plagued by ‘engrams,’ mental images similar to memories which can cause emotional pain.

The Church rids people of engrams through the use of an E-meter, commonly used in free Scientology stress tests, that measures electrical resistance and pinpoints where the engrams live.

After Cypher is wounded in the spaceship crash he audits Kitai from a far, helping him to move past his painful memories and find inner strength.

Cypher even has a equivalent of a 31st century E-meter with Kitai’s ‘Smart Fabric’ suit that tracks his health stats.
A third similiarity is that the predominant theme in the film is man-versus-nature, a basic Scientology concept. In Scientology life is divided into eight ‘urges of survival,’ commonly known as dynamics.
The first dynamic is self, the survival of the individual against all odds. In the film Kitai outruns Earth’s harsh environmental elements and dangerous wildlife hoards.

The film suggests that he is able to overcome his external circumstances due to self-actualization and not an actual skill set. 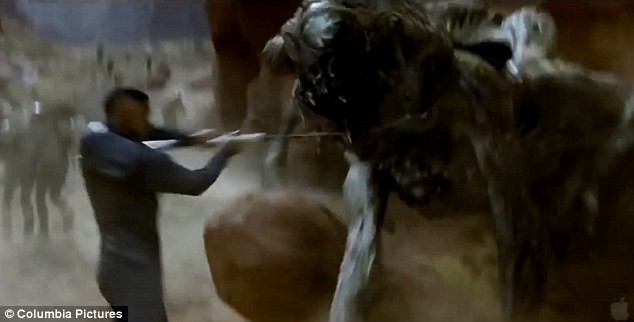 The film’s villains, blind aliens who both inspire and feed off of human fear are representative of Hubbard’s condemnation of psychiatrists, who Hubbard wrote, ‘advertise man as a push-button stimulus-response robot’ 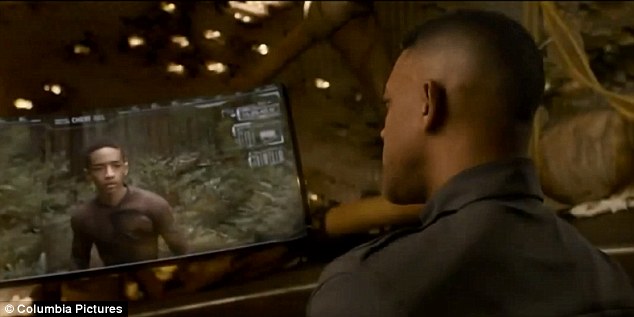 In the film Will Smith’s character ‘audits’ his son from afar, a Scientological precept where someone helps you erase painful memories in order to find inner strength. In this scene Smith coaches his son from a video screen on the spaceship 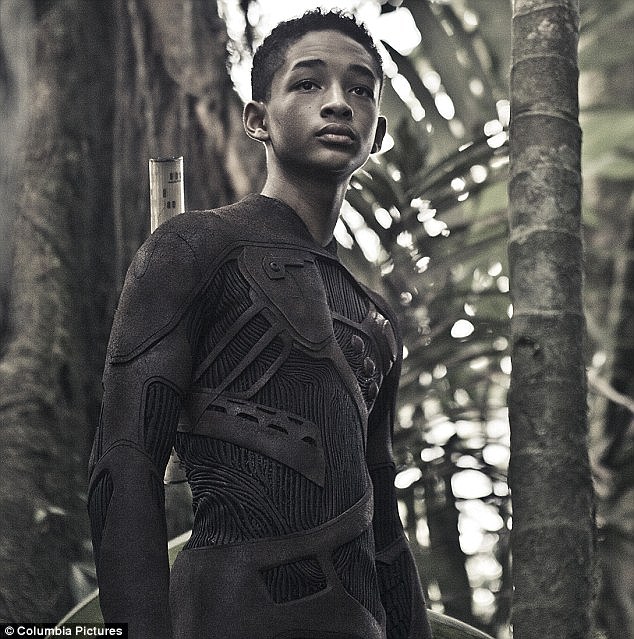 Similar to an E-meter, used in Scientology stress tests, the character’s ‘Smart Fabric’ suit (worn here) allows Smith to track his son’s health stats and locate areas of stress in his body and mind

Finally critics noted that the film’s villains, monstrous aliens who feed off of people’s fears, are representative of Hubbard’s aversion to psychiatry.

Hubbard was famously outspoken against psychiatrists, writing in his paper Crime and Psychiatry that they ‘advertise man as a push-button stimulus-response robot’ and use inhumane methods to manipulate people’s moods.

In After Earth the blind, murderous aliens are akin to psychiatrists, feeding off people’s fear while also provoking them.

Religious overtones aside, After Earth failed to do well financially at the box office and opened to poor reviews.

The Hollywood Reporter reported that on its opening night the film only grossed $1M, and may only debut at $35M, the lowest opening for Smith in his recent film history.

The Los Angeles Times summed up the movie in their review’s title stating, ”After Earth’ crashes on take-off.’ 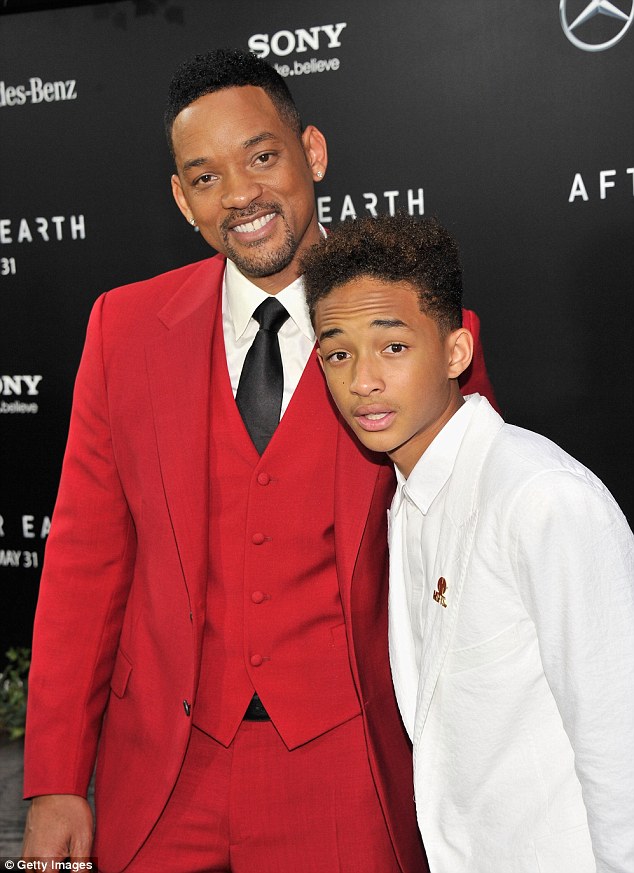 Will Smith and son Jaden pose together at the premiere of their new summer action flick, After Earth. The film has been called a parable for Scientology by critics. Smith has donated money to the church in the past, though he denies being a Scientologist

The New York Daily News also condemned the film saying, ‘Summer 2013 has its first bomb, and sadly, it’s landed right on Will Smith.’
However the harshest review came from The Atlantic who criticized the film’s actors with a back-handed compliment for its director. Reviewer Christopher Orr wrote, ‘On the upside, this may be the first terrible movie by M. Night Shyamalan that’s not primarily his fault.’
This is not the first time that Smith has been closely associated with Scientology.
In 2007 he donated $122,500 to church charities.

Then two years later Smith and his wife Jada Pinkett Smith opened the New Village Leadership Academy in California, a private school based on Hubbard’s teachings.
Despite Smith’s philanthropic efforts involving the church he strongly denies being a practicing member. Instead, in several interviews Smith has labeled himself as a ‘student of world religion.’
Read more: http://www.dailymail.co.uk/news/article-2334240/Will-Smiths-new-film-After-Earth-accused-propaganda-Scientology-tanks-box-office.html#ixzz2Uzs4NCCr