A student has uncovered the 3,000-year-old secrets of seven Egyptian mummies – after scanning them at a Manchester hospital.

Abeer Helmi was stunned when curators at the British Museum in London agreed to loan out the priceless artefacts for her research project.

Curators even agreed to drive the mummies 200 miles north to be tested in a CT scanner, designed for examining hospital patients. 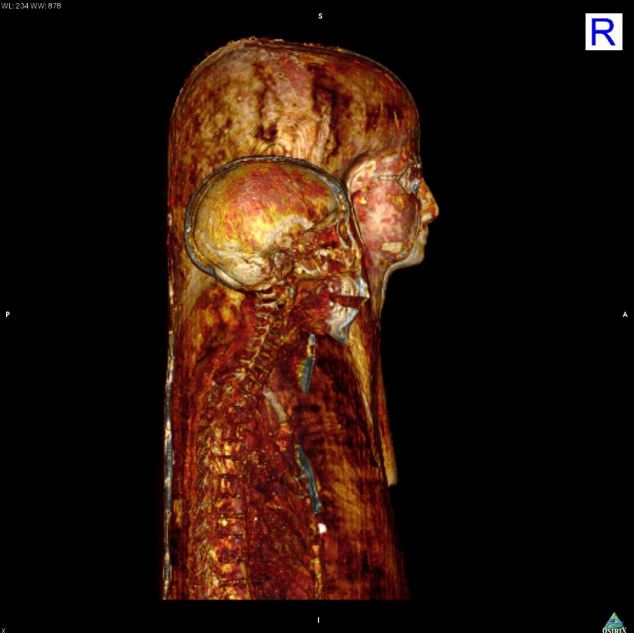 Inside look: A mummy from the British Museum after being scanned at Manchester Royal Infirmary

The Manchester University researcher and doctors at Manchester Royal Infirmary used modern technology to see inside the mummies’ bandages without disturbing the delicate bodies or their wrappings.

The powerful rays were able to shed light on the techniques used to preserve the bodies, along with information about their diets and health.

The scans also revealed metals amulets and charms, concealed inside the wrappings, which are thought to have been placed there to protect the dead during their journey to the underworld. 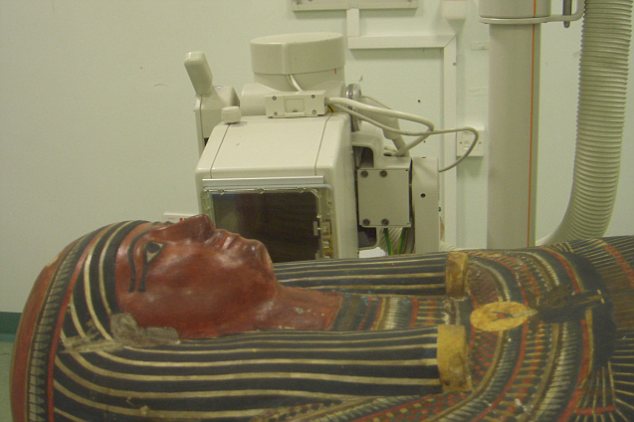 The seven bodies – aged from about 12 to their mid-50s – date from around 900BC when mummification technology was at its peak.

They were shipped to Manchester by a specialist delivery firm, escorted by a member of museum staff.

The scans were undertaken over several weeks, during evenings and weekends when the scanner was not being used by patients.

Egyptian-born PhD student Abeer, 42, who worked at Cairo Museum before studying in Manchester, impressed bosses at the British Museum with her knowledge of the ancient world. 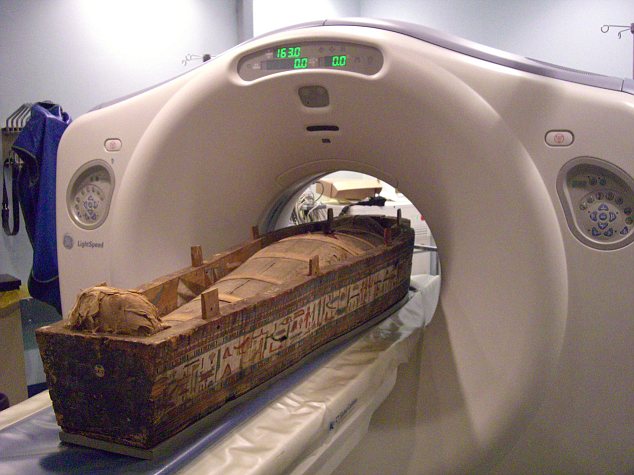 One of the British Museum mummies being scanned by Manchester University PhD student Abeer Helmi at Manchester Royal Infirmary.

She said the detailed images had already improved knowledge on the period.

‘We had to hire a company that specialised in transporting works of art to drive them to the hospital in two shipments.

‘They were accompanied at all times by a member of staff.

‘They are very delicate and still covered in their casing.

‘Using this technique allowed us see exactly how they were wrapped and also learn about their health.’

The team also found how the mummies were kept in the correct position even after death. 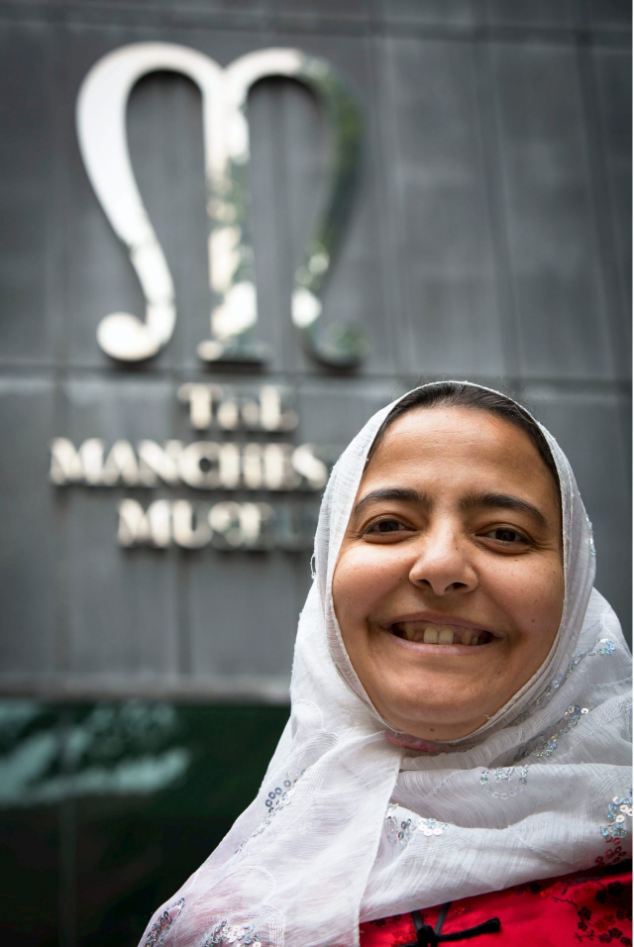 Abeer Helmi, the student who persuaded curators at the British Museum in London to loan out the priceless artefacts for her research project.

‘We spotted wooden struts inside the wrappings which were used to support the bodies after death, and abnormalities in two of the mummies,’ she explained.

Doctors at the hospital have been working closely with Manchester University experts for the last 30 years. 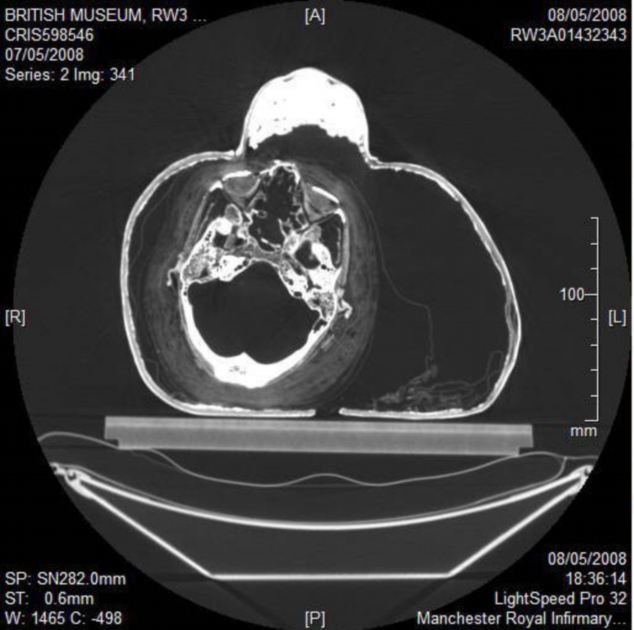 Egyptologist Prof Rosalie David, who supervised the study, said: ‘This type of technique is now often used on mummified remains.

‘But the fact the British Museum was prepared to transport these artefacts is a mark of how highly the team at Manchester Royal Infirmary is regarded.’

Judith Adams, a consultant radiologist at the hospital who helped Abeer with her work, joked: ‘It’s something of a change from our normal patients.

‘But we’ve had a long-standing collaboration with Egyptologists in Manchester.

‘We’re able to look at the bodies from a medical point of view and give our opinion on how these people lived and their health in general.’ 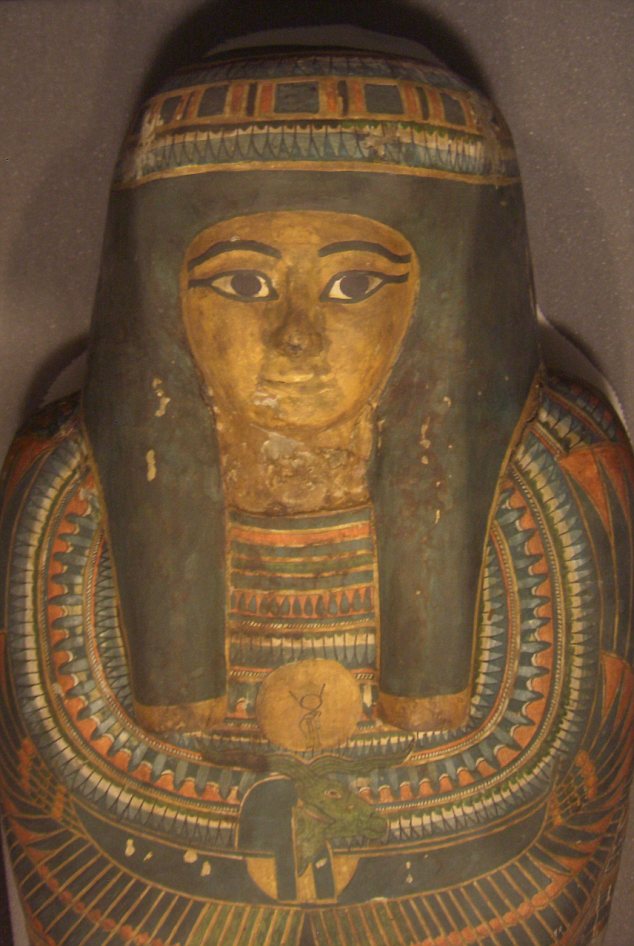 Saving face: The ornamental painted exterior of one of the caskets scanned as part of the experiment

Earlier this year the faces of ancient Egyptians went on show in Manchester.

The portraits painted on to panels that covered the heads of mummies form part of an exhibition at the city’s John Rylands Library.

The panels, which have rarely been shown in public, were bequeathed to Manchester Museum by cotton magnate Jesse Haworth in 1921. 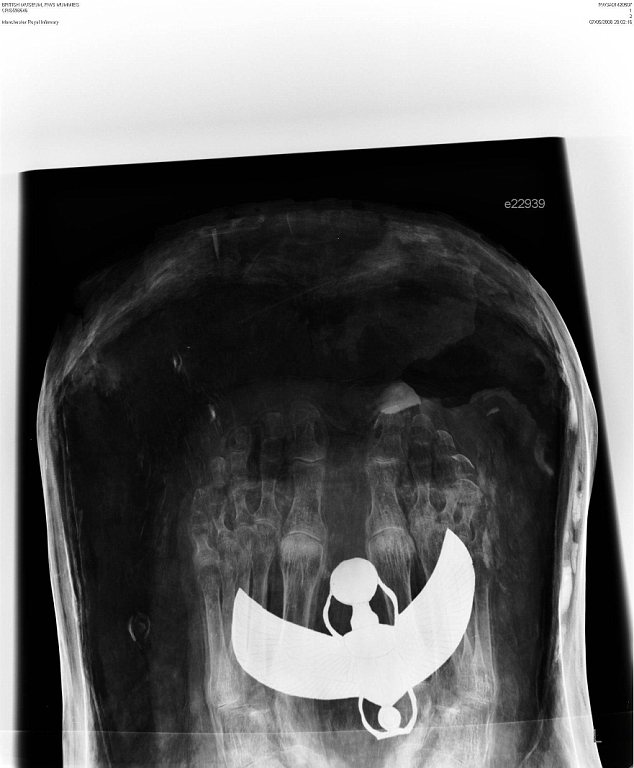 The scans also revealed the metal trinkets placed inside the caskets. 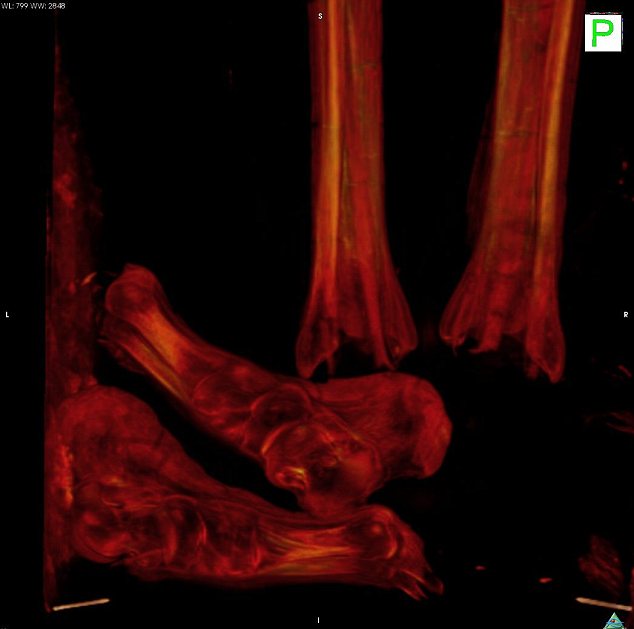 Dozens of Mummies Unearthed at Egypt’s Valley of the Kings