By Nigeria correspondent Barnaby PhillipsDeep in the Nigerian rainforest, one of Africa’s greatest monuments has been virtually ignored by the outside world for hundreds of years.

Yet the Eredo earthwork lies just one hour’s drive from Lagos.Now being investigated by Dr Patrick Darling of Bournemouth University in the United Kingdom, the Eredo provides clear evidence of a powerful lost kingdom, and,

According to local tradition, the site may even shed light on the legendary Queen of Sheba.

Trekking through the rainforest you could pass within a few yards of the Eredo and not even know it was there – a great ditch hidden in the vegetation.

Built some 1,000 years ago, it encircles the ancient kingdom of Ijebu-Ode, snaking through swamps and forests.

Dr Darling has walked its length.

“In terms of sheer size it’s the largest single monument in Africa – larger than any of the Egyptian pyramids,” he says.The ditch is 160 km (100 miles) long, and in places 20 metres (70 feet) deep.

“Built long before the mechanical era, it was all hand-built, requiring a large labour force and a well co-ordinated labour force working to a master plan,” Dr Darling explains.

We make our way through thick tropical vegetation down to the bottom of the Eredo – its smooth walls tower above on either side of us, glowing green with moss.

It is cool and dark, with patches of sunlight filtering through the trees above.

Dr Darling has compiled an immense amount of data on the Eredo, but even he does not know why it was built.

Perhaps to keep elephants out, or as protection against foreign invaders – or perhaps to mark the territorial extent of the Ijebu-Ode kingdom at a time when the rival city states of the Yoruba people were frequently at war with each other.

At a clearing in the forest a local chief, Olaitan Olugbosi, who carries the title of the Baale of Oke-Eiri, is praying by the grave of the woman whom he believes built the Eredo.

Her name is Bilikisu Sungbo – a powerful , childless widow, who wanted a lasting memorial to her name.Her grave is now a sacred place – thousands of Christians and Muslims come to pray here every year.

As the Baale of Oke-Eiri explains, many of them are convinced that Bilikisu Sungbo is none other than the Queen of Sheba

“All what I’m saying is in the history given to me – when she married King Solomon she became Sheba, Queen Sheba, it’s in the Bible like that”

The theory is probably a little far-fetched – the queen of Sheba appears in the biblical Old Testament and in the Koran, leading most historians to believe she lived about 3,000 years ago – a full 2,000 years before the Eredo was built.

But Dr Darling believes that the eredo, threatened by forest clearance and encroaching farmers, needs all the publicity it can get.

He is concerned that in most places, the the side-walls of the trench are giving in and the bottom is eroded because of trees being cut down to create farm land.

“I am worried about it because unless it is properly protected it won’t last more than another couple of decades,” Dr Darling said.

Even in Nigeria the Eredo is virtually unheard of – yet its existence, and that of similar earthworks in nearby forests, is causing historians to re-think the entire history of West Africa.

It seems that well organised states were being formed in the rainforest region some 500 years earlier than had previously been thought.

But they have left almost nothing behind – except a great ditch through the forest, and a beguiling legend. 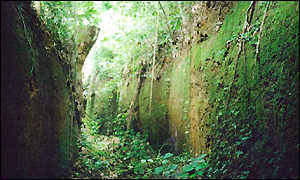 The eredo’s earth walls protect a powerful and ancient kingdom

By Barnaby Phillips in Nigeria

It may be Africa’s largest single monument, but the eredo is not exactly on a well-trodden tourist route.

Our instructions were to drive east out of Lagos for one hour, turn north at the town of Epe, look for the large mango tree on the right, stop the car, and wait for someone to emerge from the nearby village.

So that’s what we did, and, sure enough, it didn’t take long for a gentleman in the traditional Yoruba dress of south-western Nigeria to appear from the surrounding cassava fields.

The depths of the rainforest

“You’ll be wanting to see the eredo,” he said confidently, introducing himself as Mr Taofiki Sanni, before producing a large map which he unfolded on the bonnet of our car.

The eredo is, essentially, a moat, with an earth wall alongside it – together, they run, in a circle, for a length of about 100 miles. Mr Sanni’s map showed how they snake through thick rainforest, and across deep swamps.

Archaeologists believe that they served as a boundary, but also as protection, for a powerful kingdom at least 1,000 years old.

Mr Sanni ordered us to follow him, and we set off in single file across the fields, sweating in the clammy, humid, tropical heat.

Soon we were clambering down into a ditch, the air thick with the smell of rotten vegetation. We descended further, mercifully out of the sun, and down to the bottom of a dark moat.

The air was cool, and apart from a colony of bats who flapped away in alarm, everything was quiet. Giant millipedes slid silently underfoot.

The earth walls towering above us on either side of us were smooth, and covered in green moss. The walls also stretched out in front of us, before bending gently out of sight, as the eredo curved.

The great trees growing on top of the banks exaggerated the sense of depth as we looked up to the sky. One archaeologist has said that it’s like standing at the bottom of a cathedral.

It is the most astonishing feat of labour, all the more so as it was carried out by people who could not read or write, and with only the most basic of tools.

Thousands of labourers – probably slaves – must have toiled in the thick rainforest and dark labyrinth swamps for years – somehow keeping to a coherent plan that ensured the eredo ended up as a complete circle.

It’s perhaps trite to compare one ancient monument with another, but archaeologists estimate that the eredo’s construction involved about one million more man-hours than were necessary to build the Great Pyramid of Cheops, outside Cairo.

The difference is that the great pyramid stands before you in all its glory – whereas the eredo is virtually hidden by the trees and creepers that festoon its sides. So enveloped is it by vegetation, you could almost fall into it before you knew it was there.

Its scale is not at all obvious – it requires a lot of imagination to appreciate.

Within a few minutes we found our path blocked by great trees which had fallen across the moat … we were up to our waists in creepers, which Mr Sanni hacked at enthusiastically with his machete. Eventually even he gave up, and we looked for a way out.

But what about the Queen of Sheba?

To be honest, it’s a bit of a tenuous connection. According to mythology, the eredo was built at the behest of a local queen, Bilikisu Sungbo, a childless widow, who ordered her slaves to construct a lasting memorial. If you believe local tradition, Bilikisu, is none other than the Queen of Sheba.

There’s one big flaw to this theory – the appearance of the queen in both the Old Testament and the Koran has led historians to believe she lived about 3,000 years ago – long before the eredo is thought to have been built.

On the other hand, the Queen of Sheba is said to have ruled a land rich in ivory, gold and eunuchs – all of which were common in the ancient kingdoms of southern Nigeria.

Mr Sanni led us back to the mango tree by the road. He disappeared into a nearby house, before emerging with a visitors’ book.

“We have so many visitors,” he said. “Many people from all over the world”.

I looked. In fact, we were only the second group to have come this year – it was one of those visitors’ books where each page contains several years’ worth of visitors.

Maybe one day Mr Sanni will be really busy, but it seems more likely that the great eredo will remain obscure beneath layers of lush tropical vegetation.

Africa’s Tallest Statue Of Jesus To Be Unveiled In Nigeria

Ahmet Ali Çelikten, one of the first black pilots in aviation history