By ROB HUGHES
Published: December 18, 2012
LONDON — Soccer has gone a long way toward integration since a 17-year-old phenomenon we came to know as Pelé visited Europe to help Brazil win the World Cup in Stockholm in 1958.
Swedes could not help but notice that Pelé was black, but that it made no difference to the beauty of his skills.
How far has Pelé’s game — the global game — come since then? The question is provoked by what we see all around us, especially in Europe. A Serbian crowd made monkey chants to goad black players on a visiting English Under-21 team this autumn, and UEFA, the European soccer authority, issued puny fines to the Serbian federation for allowing it.
But with Europe’s major clubs now so well-served by players of every color, creed or nationality, we surely have reached a time when racial intolerance is not only passé, but its presence seems quite stupid. Now get this, from Russia, without love.
On Monday, the largest group of supporters of the Russian champion Zenit St. Petersburg posted a call on its Web site for the team to be exclusively white and heterosexual.
The first reaction of reasonable people is perhaps to think: Ignore them, and they might choke on their own rhetoric. However, Zenit is as close as it gets to a state-owned team in Russia. It is run and financed by the state-controlled energy giant Gazprom. Millions extracted from the ground are pumped into making that club competitive against the increasingly foreign-backed teams in the Champions League.
President Vladimir Putin and Prime Minister Dmitry Medvedev were born in the city and have Zenit in their hearts.
Just a few months ago, the Communists of Russia, a St. Petersburg branch of the political group, wrote an open letter to the president calling on him to “save” the club from internal combustion over local players’ rebelling at the salaries used to entice the Brazilian Hulk and the Belgian Axel Witsel to come to St. Petersburg.
Now that that fire has been damped, a second “open letter” has again stirred the issue of color. Hulk, whose full name is Givanildo Vieira de Souza, happens to be dark-skinned. So does Witsel, whose father is from Martinique in the French Caribbean.
To most of us, they just are players, in Hulk’s case a powerful and gifted striker whose travels have so far taken him from Brazil to Japan to Portugal, and then, last August, to Russia.
The fan group Landscrona published what it called its manifesto on Monday. “We are not racists,” the statement read. “For us the absence of black Zenit players is just an important tradition that underlines the team’s identity and nothing more.” But they are not racists and not bigots, they claim.

Something is either lost in translation or in human understanding, because the diatribe spells out: “Dark-skinned players are all but forced down Zenit’s throat now, which only brings out a negative reaction.” And: “Gay players are unworthy of our great city.”
St. Petersburg is a great city of the Russian Revolution. Its club, now called Zenit, was formed by metalworkers when the city was called Leningrad. And it has nouveau riche opponents in Russia who are going out into the world to recruit renowned individuals from Brazil, Cameroon or wherever to break Zenit’s power — or even to surpass the club.
Yet the Landscrona fan club letter is explicit. “As the most northern club of the major European cities,” it states, “we have never been associated with Africa, South America, or Australia and Oceania.
“We have absolutely nothing against the people of these and any other continent. We only want players from other brotherly Slav nations, such as Ukraine and Belarus, as well as from the Baltic states and Scandinavia.”
That presumably would rule out Dick Advocaat, the Dutchman who coached Zenit to the Russian league title in 2007. It would disparage Luciano Spalletti, the Florentine who has instilled some Italian principles into the team and has won two titles since he took over as coach in three winters ago.
Spalletti is nothing if not a man for free speech. While the club did say on Monday that its recruitment policy was, and would remain, aimed at the world community of players, the coach tackled the issue of racism head-on. 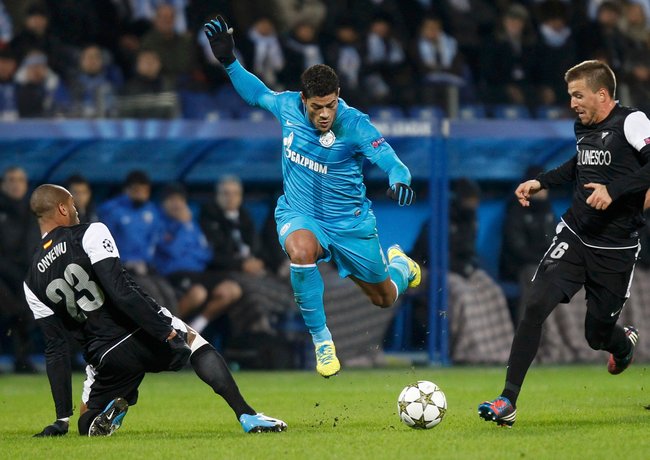 “Tolerance for me,” Spalletti said on the team’s Web site, “is the ability to understand and accept differences.” For good measure, he added: “Being tolerant means that you fight against any kind of stupidity.”
For as long as Spalletti is in charge of the team — which might not be entirely dependent on results — he is obviously going to stand for his principles. “I can personally assure everyone,” he continued, “that I will do everything I can to help those who seek to explain to people what tolerance is, and the need to respect other cultures and traditions.
“The team has gathered players from different countries and ethnic groups who work together to achieve a common goal, and work well.”
What Spalletti does not say is that money, by the millions, is what breaks down the last vestiges of racial intolerance within the dressing room walls.
What we can all see, and hear, is that so-called big players like Chelsea’s John Terry and Liverpool’s Luis Suárez are having to learn the hard way that racist words as well as attitudes will not be tolerated in the current multicultural makeup of the sport.
But with the money now available in Eastern Europe, the best example of integration comes on the field. It is currently being led by Shakhtar Donetsk, whose blend of Ukrainian defenders and Brazilian flair has been at times quite outstanding in the Champions League this season.
Watching Fernandinho, Douglas or Alex Teixeira creating the chances for Luiz Adriano and Willian to score in Donetsk is an object lesson in Brazilian adaptability in the harshest industrial heartland and the coldest of climates.
The players pass and move in ways that only truly integrated people can. The fans know it. And the time to question a player’s skin tone is as irrelevant now as it was in Pelé’s time.