By THE NEW YORK TIMES     Published: June 25, 2013
The Supreme Court struck down a central portion of the Voting Rights Act on Tuesday, effectively ending the practice in which some states with a history of racial discrimination must receive clearance from the federal government before changing voting laws.

The majority held that Section 4 of the Voting Rights Act, originally passed in 1965 and since updated by Congress, was unconstitutional. The section includes a formula that determines which states must receive pre-approval.

The court did not strike down Section 5, which allows the federal government to require pre-approval. But without Section 4, which determines which states would need to receive clearance, Section 5 is largely without significance — unless Congress chooses to pass a new bill for determining which states would be covered.

Given the current partisan nature of Congress, reaching agreement on a new formula may be difficult.

The Voting Rights Act of 1965 was one of the towering legislative achievements of the civil rights movement. Its central provision, Section 5, requires many state and local governments, mostly in the South, to obtain permission from the Justice Department or a federal court in Washington before making changes in laws that affect voting.

That means jurisdictions covered by Section 5 must get federal approval before they make minor changes to voting procedures, like relocating a polling place, or major ones, like redrawing electoral districts.

The Supreme Court had repeatedly upheld the law, saying that Section 5’s “preclearance requirement” was an effective tool to combat the legacy of lawless conduct by Southern officials bent on denying voting rights to blacks. 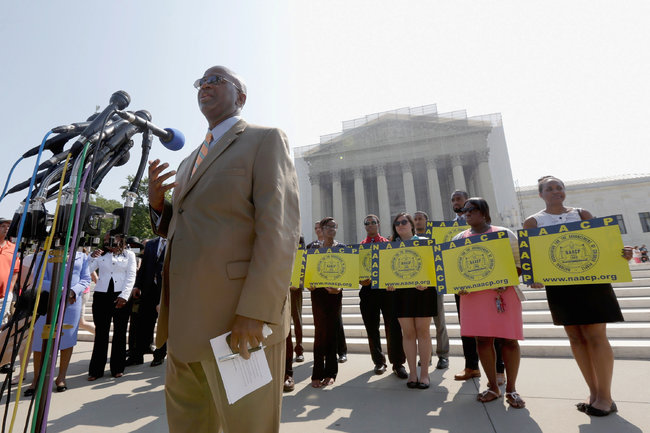 Win Mcnamee/Getty Images——–Charles White, field director for the National Association for the Advancement of Colored People, outside the Supreme Court on Tuesday.

Critics of Section 5 say it is a unique federal intrusion on state sovereignty and a badge of shame for the affected jurisdictions that is no longer justified. They point to high voter registration rates among blacks and the re-election of a black president as proof that the provision is no longer needed.

Civil rights leaders, on the other hand, say the law played an important role in the 2012 election, with courts relying on it to block voter identification requirements and cutbacks on early voting.

Section 5 was originally set to expire in five years. Congress repeatedly extended it: for five years in 1970, seven years in 1975, and 25 years in 1982. Congress renewed the act in 2006 after holding extensive hearings on the persistence of racial discrimination at the polls, again extending the preclearance requirement for 25 years.

In 2012, a divided three-judge panel of the United States Court of Appeals for the District of Columbia rejected a challenge to the law filed by Shelby County, Ala. Judge David S. Tatel, writing for the majority, acknowledged that “the extraordinary federalism costs imposed by Section 5 raise substantial constitutional concerns,” and he added that the record compiled by Congress to justify the law’s renewal was “by no means unambiguous.” 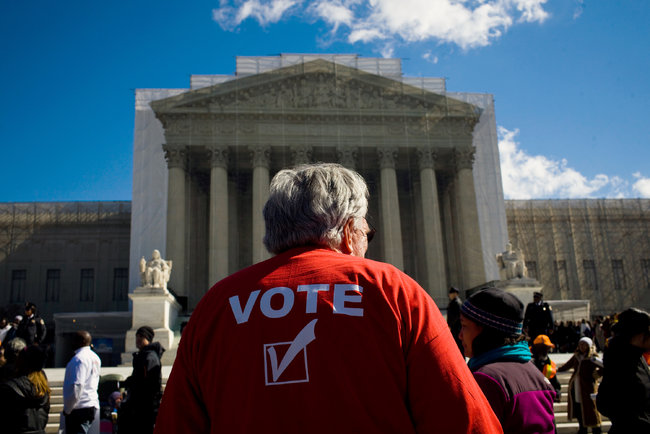 Christopher Gregory/The New York Times—–Groups rallied in front of the Supreme Court in February on the subject of the Voting Rights Act.

“But Congress drew reasonable conclusions from the extensive evidence it gathered,” he went on. The constitutional amendments ratified after the Civil War, he said, “entrust Congress with ensuring that the right to vote — surely among the most important guarantees of political liberty in the Constitution — is not abridged on account of race. In this context, we owe much deference to the considered judgment of the people’s elected representatives.”

The dissenting member of the panel, Judge Stephen F. Williams, surveyed recent evidence concerning registration and turnout, the election of black officials, the use of federal election observers and suits under another part of the law.

Some of that evidence, he said, “suggests that the coverage formula completely lacks any rational connection to current levels of voter discrimination,” while other evidence indicates that the formula, “though not completely perverse, is a remarkably bad fit with Congress’s concerns.”

“Given the drastic remedy imposed on covered jurisdictions by Section 5,” he wrote, “I do not believe that such equivocal evidence can sustain the scheme.”

The Supreme Court had once before considered the constitutionality of the 2006 extension of the law in a 2009 decision, Northwest Austin Municipal Utility District Number One v. Holder. But it avoided answering the central question, and it see

How the Republican Party Can Win Black Voters