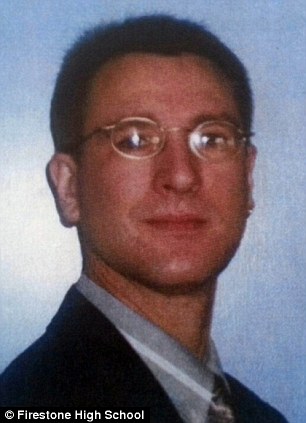 Under fire: David Spondike, a high school music teacher from Akron, Ohio, has been suspended with pay after school officials say he posted a series of racially charged messages on his Facebook page

An Ohio high school music teacher has been placed on leave after posting racially charged rants on his Facebook page decrying the lewd actions of a ‘ghetto’ trick-or-treater.

David Spondike, 51, was suspended with pay Monday from Firestone High School in Akron pending an internal investigation into allegations of inappropriate behavior.

According to Akron School Superintendent David James, his remarks were directed at a teenager who exposed himself in front of young children and urinated on a telephone pole while trick-or-treating in Spondike’s neighborhood in Copley Township Sunday, Ohio.comreported.
Spondike’s Facebook account has since been deleted.

The original post read: ‘I don’t mind if you come from the ghetto to trick or treat. But when you whip out your teeny d**** and p*** on the telephone pole in front of my front yard and a bunch of preschoolers and toddlers, you can take your n*****-ass back where it came from. I don’t have anything against anyone of color, but n*****s, stay out.’
Scroll down for video 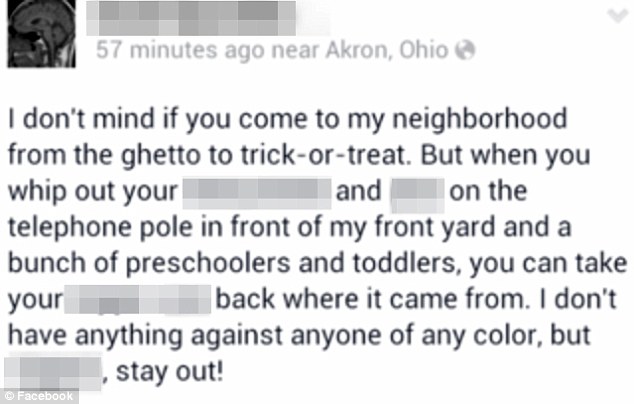 Foul-mouthed tirade: Spondike posted this rant filled with racial slurs and expletives after a run-in with a trick-or-treater who allegedly exposed himself in his neighborhood and urinated on a telephone pole

The 51-year-old followed up with another message, writing that he ‘welcomes people who come from dangerous neighborhoods to mine, so their children can safely trick or treat. I feel sorry that they feel they need to do so, but they have been coming here for years.’

However, the music teacher warned outsiders that unruly behavior will not be tolerated.

‘Your [sic] are a CRIMINAL and are not welcome in my neighborhood and you should not be welcome in your own! THAT IS WHY YOU HAVE COME TO MINE TO TRICK OR TREAT. Do not treat my neighborhood like you do your own. I HAVE THE RIGHT NOT TO BE LIKE YOU.’
Spondike then went on a tangent about the prevalent use of the N-word by ‘black people’ in his school.

‘Racism is racism and to allow one race to use [a] word and not another IS racist. What I said was absolutely NOT racist by any stretch of the imagination.’ 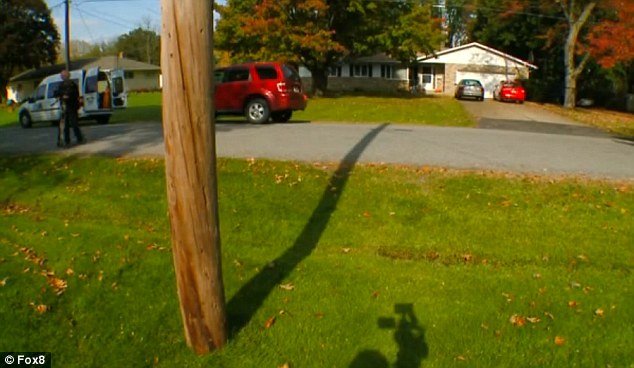 Lashing out: Spondike, 51, posted the message on Facebook Sunday after allegedly spotting the black teenager outside his home in Copley Township 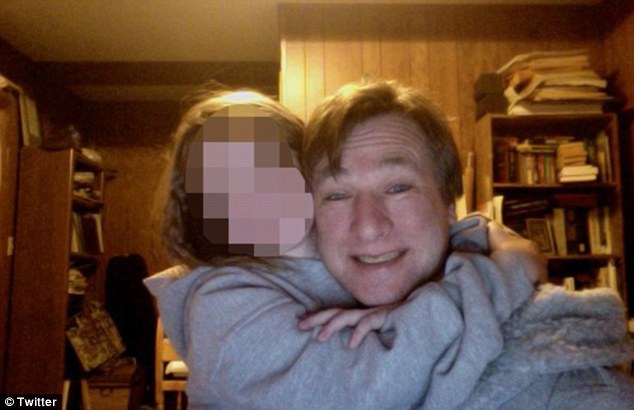 New calling: Spondike, a single father, was hired to teach music and orchestra to kids in 1998 after leaving a career in television

Mr Spondike further elaborated on the subject, telling his critics: ‘If you want to be a language policeman, I suggest you find yourself in a George Orwell novel. When I try to get the teenagers in my school to stop using the word [racial slur], I only get laughed at.’

After Spondike’s controversial Facebook posts came to light, James said the teacher offered an apology ‘to those who are sincerely offended.’

‘His comments were unprofessional and unbecoming a teacher,’ the superintendent said in a written statement. ‘Regardless of whether he was on his own time and own account doing this, he is a teacher; and his actions influence children. This is serious.’

Spondike, who describes himself on his Twitter account as ‘Father. Educator. Musician. Sailor,’ has been at the Akron School District since 1998, teaching music, music history and orchestra.

In the early 90s, Spondike worked in television in Cincinnati, and at one point was an assistant director on The Jerry Springer Show.

Over the past 13 years, Spondike has been investigated four times, beginning in 2000 when he threw a chair and used an obscenity in a classroom. 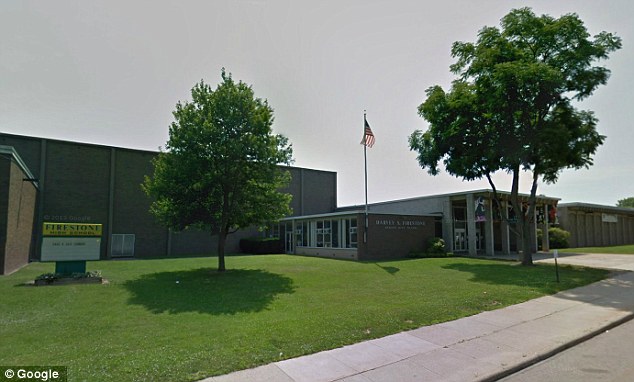 Troubled past: Spondike’s personnel records indicate that the Firestone High School teacher has been investigated four times since 2000, including for an incident where he threw a chair in class, and another instance where he spat on the floor in anger

A year later, the music teacher was again accused of misconduct after he spat on the floor during class because he was angry that a student dozed off.

Around the same time, he landed in hot water for admonishing a fellow teacher for his failure to reprimand a student dressed in ‘very baggy pants,’ the station WKYC reported.

In 2007, Spondike faced allegations of pinning a student from Goodyear Middle School against the wall, but he was ultimately cleared in connection to the incident.

The school district will hold a hearing within the next week to determine what, if any punishment, Spondike will face.
Read more: http://www.dailymail.co.uk/news/article-2478955/David-Spondike-Firestone-High-School-Teacher-suspended-racist-Facebook-post.html#ixzz2jEHIiy1V