Two million years ago, one of our distant ancestors lived on leaves and fruit from the trees in Africa.

Scans of fossil teeth show the short and gangly South African Australopithecus sediba lived on a hard diet of trees, bushes and fruit two million years ago – similar to a chimpanzee.

But virtually all other ancient human ancestors from Africa tucked into softer meals of grasses and sedges – even the ‘Nutcracker Man’, Paranthropus boisei, with his massive jaws and teeth. 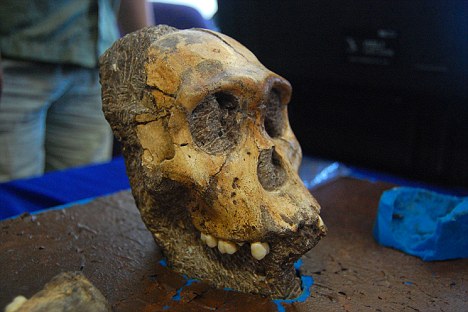 An analysis of the teeth of the short, gangly hominin australopithecus sediba shows it had a diet unlike virtually all of our other known ancestors

A. sediba had an upright posture and long arms, and embodied characteristics of both primitive and modern hominids – including a human-like ankle, short fingers and a long thumb for possible precision gripping and a relatively complex brain compared to earlier hominids.

Researchers made the discovery by zapping fossilised teeth with a laser, which frees carbon from the enamel – allowing scientists to find the types of plants consumed and environments where the hominids lived.

Although bark and woody tissues had not been documented as a dietary component of any other ancient African hominids before, these foods had been scoffed by many contemporary primates and contain both protein and soluble sugars.

The diet of A. sediba also may have been similar to that of today’s African savanna chimpanzees.

University of Colorado Boulder doctoral student Paul Sandberg said: ‘The fact that these phytoliths are preserved in the teeth of 2-million-year-old hominids is remarkable and speaks to the amazing preservation at the site. 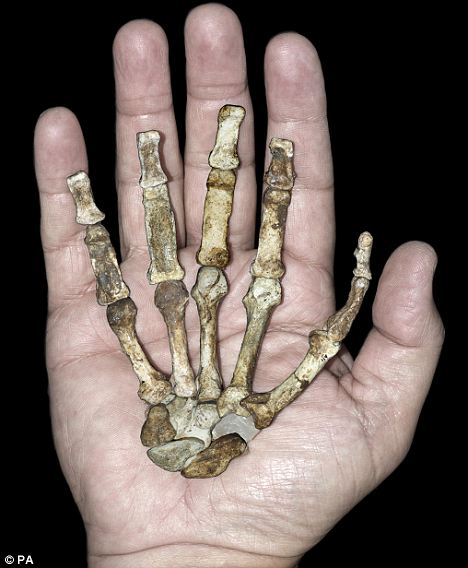 Boning up on the facts: A right hand skeleton of Australopithecus sediba superimposed against a modern human hand 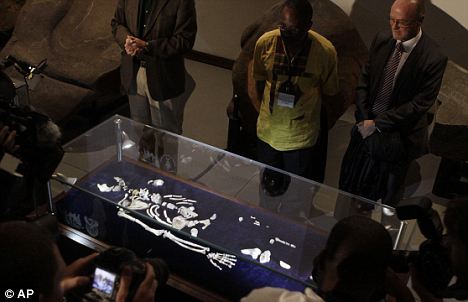 Remarkable find: One of two sets of bones from Australopithecus Sediba are unveiled at the University of the Witwatersrand in Johannesburg this week 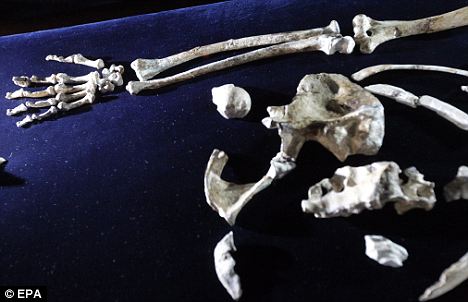 ‘The phytolith data suggest the A. sediba individuals were avoiding the grasses growing in open grasslands that were abundant in the region at the time.

‘It is an important finding because diet is one of the fundamental aspects of an animal, one that drives its behaviour and ecological niche.
‘As environments change over time because of shifting climates, animals are generally forced to either move or to adapt to their new surroundings.

‘What fascinates me is that these individuals are oddballs. I had pretty much convinced myself that after 4 million years ago most of our hominid kin had diets that were different from living apes, but now I am not so sure.

‘And while our sample is too small to be conclusive, the rate at which Malapa is spewing hominid fossils makes me reasonably certain we won’t have to wait another two million years to augment our data set.’