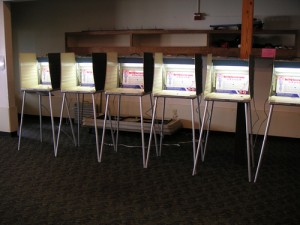 (Reuters) – The Voting Rights Act – a cherished safeguard for minority voters since 1965 – has been under siege for two years and this week faces one of its toughest tests on an apparent path to the U.S. Supreme Court.

Twenty-five hours of argument, starting on Monday and spread over five days, will help the judges of the U.S. District Court for the District of Columbia decide whether Texas can require voters to present a photo identification at the polls.

Formulated at a time of racial turmoil, the Voting Rights Act passed 77-19 in the U.S. Senate and 333-85 in the House of Representatives. The votes transcended party lines to protect black voters of all political ideals.

Ever since, it has served as the U.S. government’s chief check on the fairness of election rules imposed by local governments.

While it passed with bipartisan support more than 45 years ago, a shift in political preferences along racial lines has turned the landmark piece of civil rights era legislation into a highly charged political issue.

In the 1960s, Democrats held a monopoly of voters in the Southern states. But since then, most white Southern voters have shifted allegiances to the Republican Party, while black and Hispanic voters moved further toward the left.

That shift did not fully manifest itself until congressional redistricting last year, Nathaniel Persily, a professor at Columbia Law School, wrote in a to-be-released article in the Stanford Law & Policy Review. There have been more challenges to the Voting Rights Act in the past two years than in the previous 45 years combined. Among those challenges have been a redistricting case in Alabama and Florida’s purging of voter lists of non-citizens earlier this year.

“We’re seeing people who previously supported the act and what it stood for are now bringing challenges to it,” said Ryan Haygood, director of the Political Participation Group at the NAACP Legal Defense Fund.

In March, the Obama administration blocked a Texas law passed in 2011 requiring voters to present photo identification at the polls, saying it was unfair to minority voters. Texas sued the U.S. government, saying its measures were fair and the Justice Department had political motives in going after the law.

“I think it’s a different Department of Justice than in the past,” said Patricia Harless, a Republican who sponsored the voter ID law in the Texas House of Representatives.

Harless said the Texas law was very similar to Georgia’s, which the Justice Department did not block. Indiana also has a law requiring voters to have a photo ID and that will be a factor in the court’s consideration of the Texas law.

Because of the lawsuit, the U.S. district court in Washington, D.C., will host the first trial challenging the government’s power to block a voter ID law since the Democratic Obama administration took office.

Under the blocked Texas measure, voters would be required to show photo identification such as a driver’s license or passport in order to cut down on voter fraud.

Existing Texas law says voters have to show a voter registration card – which does not have a photo – or an acceptable alternative, such as a driver’s license or a utility bill.

The Justice Department counters that Hispanic voters are up to twice as likely to lack the required form of identification as their Caucasian counterparts. For them, getting a photo ID could be a headache.

Haygood represents a group of black students who want to vote in Texas but were born in other states. The new law allows handgun licenses to serve as voter identification but not student IDs.

Some of the students do not have birth certificates, and under the new law, must contact their home counties and pay for one if they want to vote, Haygood said.

Two of the three judges on the panel were appointed by Democratic presidents so it might seem unlikely the court would overturn the Obama administration.

The Texas voter ID dispute is one of dozens of challenges to the Voting Rights Act aimed not just at defending voting changes but also at getting the Supreme Court to strike down the law for good, Persily said.

The Supreme Court last considered the Voting Rights Act in 2009 in upholding Indiana law but narrowly tailored its judgment to delay ruling on the constitutionality of the entire law.

The new wave of disputes that emerged from the 2011 redistricting cycle likely will force the court to take more definitive action as soon as this spring.

The Voting Rights Act places the burden on Texas to prove that the laws do not leave minority voters in a more difficult position to vote than they were in before the new law.

Record minority turnouts in the 2008 presidential election have helped to make the issue a partisan one.

“Actions and interpretations that previously would not have raised partisan eyebrows are now seen as outrages,” Persily wrote.

No matter how aggressively the Justice Department invokes that section, at least one side of today’s political spectrum will be unhappy. Enforce it often and face Republican accusations of overreaching into the states’ sovereignty; Enforce it rarely and face Democratic accusations of shirking minority protections; Enforce it selectively and, ironically, face accusations of playing politics.

“The Voting Rights Act wasn’t designed to be enmeshed in partisan politics,” Persily told Reuters, “And that’s what is happening now.”

The Texas lawsuit for approval of the voter identification law is: State of Texas v. Holder in U.S. District Court for the District of Columbia, No. 12-cv-128. The judicial panel is composed of Appeals Judge David Tatel, District Judge Robert Wilkins and District Judge Rosemary Collyer.