The Aeta (pronounced as “eye-ta,”), Agta or Ayta are an indigenous people who live in scattered, isolated mountainous parts of Luzon, Philippines. They are considered to be Negritos, who are dark to very dark brown-skinned and tend to have features such as a small stature, small frame, curly to kinky afro-like textured hair with a higher frequency of naturally lighter hair color (blondism) relative to the general population, small nose, and dark brown eyes. They are thought to be among the earliest inhabitants of the Philippines, preceding the Austronesian migrations.
The Aeta were included in the group of people termed “Negrito” duringSpanish colonial rule as Negritos. Various Aeta groups in northern Luzon are known as “Pugut” or “Pugot,” a name designated by their Ilocano-speaking neighbors, and which is the colloquial term for those with darker complexions. In Ilocano, the word also means “goblin” or “forest spirit.”

A trio of Aetas performing on stage at a show inSM City Clark.

The Aeta people in the Philippines are Australo-Melanesians. Today other groups of Australo-Melanesians are the Aborigines in Australia, Papuans and the Melanesians of the Solomon Islands, Vanuatu, Fiji, New Caledonia etc. The history of the Aeta continues to confound anthropologists and archaeologists. One theory suggests that the Aeta are the descendants of the original inhabitants of the Philippines, who, contrary to their sea-faring Austronesian neighbors, arrived through land bridges that linked the country with the Asian mainland about 30,000 years ago. Unlike many of their Austronesian counterparts, the Aetas have shown resistance to change. The attempts of theSpaniards to settle them in reducciones or reservations all throughout Spanish rule failed.
The Aeta are an indigenous people who live in scattered, isolated mountainous parts of the Philippines. Aetas are considered as the earliest inhabitants of the Philippines, preceding the Austronesian migrations. They are nomadic and build only temporary shelters made of sticks driven to the ground and covered with the palm of banana leaves. The well-situated and more modernized Aetas have moved to villages and areas of cleared mountains. They live in houses made of bamboo and cogon grass. Aetas are found in Zambales, Tarlac, Pampanga, Angeles, Olongapo, Panay, Bataan and Nueva Ecija. But because of the Mount Pinatubo eruption, some of them moved to resettlement areas in Pampanga and Tarlac. 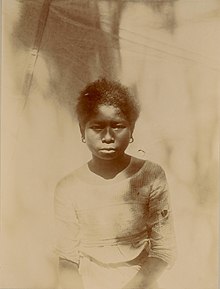 Mining, deforestation, illegal logging, and slash-and-burn farming has caused the indigenous population in all parts of the Philippines to steadily decrease to the point where they number in the thousands today. The Philippines affords them no protection. In addition, the Aeta have become extremely nomadic due to social and economic strain on their culture and way of life that had previously remained unchanged for thousands of years.

The life expectancy at birth of the Aeta is just 16.5 years, with only a third of children surviving to adulthood at 15 years – at which point life expectancy is still only 27.3 years. Young women reach full adult height (average 140 cm) at age 12 or 13. The most thorough longitudinal study done of any Aeta group (or any ethnic community) is available on the Web.

All Aeta communities have adopted the language of their Austronesian Filipino neighbors, which have sometimes diverged over time to become different languages. These include, in order of number of speakers, Mag-indi, Mag-antsi, Abellen, Ambala, and Mariveleño.

There are different views on the dominant character of the Aeta religion. Those who believe they are monotheisticargue that various Aeta tribes believe in a supreme being who rules over lesser spirits or deities, with the Aeta of Mt. Pinatubo worshipping “Apo Na”. The Aetas are also animists. For example, the Pinatubo Aeta believe in environmental spirits such as anito and kamana. They believe that good and evil spirits inhabit the environment, such as the spirits of the river, sea, sky, mountain, hill, valley and other places.
No special occasion is needed for the Aeta to pray, although there is a clear link between prayer and economicactivities. The Aeta dance before and after a pig hunt. The night before Aeta women gather shellfish, they perform a dance which is partly an apology to the fish and partly a charm to ensure the catch. Similarly, the men hold a beedance before and after the expeditions for honey.
In the mid-60s missionaries of the American-based Evangelical Protestant mission group New Tribes Mission, in their effort to reach every Philippine tribal group with the Christian Gospel reached out to the Agtas/Aetas. The mission agency provided education including pastoral training for natives to reach members of their own tribe. Today, a large percentage of Agtas/Aetas of Zambales and Pampanga are Evangelicals. Jehovah’s Witnesses also have members of the Aeta people. (See 1993 Yearbook of Jehovah’s Witnesses)

Their traditional clothing is very simple. The young women wear wrap around skirts. Elder women wear bark cloth, while elder men wear loin cloths. The old women of the Agta wear a bark cloth strip which passes between the legs, and is attached to a string around the waist. Today most Aeta who have been in contact with lowlanders have adopted the T-shirts, pants and rubber sandals commonly used by the latter.

The Aetas are skillful in weaving and plaiting.
Women exclusively weave winnows and mats. Only men make armlets. They also produce raincoats made of palm leaves whose bases surround the neck of the wearer, and whose topmost part spreads like a fan all around the body.

Aeta women are known around the country as experts of herbal medicines.

A traditional form of visual art is body scarification. The Aetas intentionally wound the skin on their back, arms, breast, legs, hands, calves and abdomen, and then they irritate the wounds with fire, lime and other means to form scars.
Other “decorative disfigurements” include the chipping of the teeth. With the use of a file, the Dumagat modify their teeth during late puberty. The teeth are dyed black a few years afterwards.
The Aetas generally use ornaments typical of people living in subsistence economies. Flowers and leaves are used as earplugs for certain occasions. Girdles, necklaces, and neckbands of braided rattan incorporated with wild pig bristles are frequently worn.

The Aeta have a musical heritage consisting of various types of agung ensembles – ensembles composed of large hanging, suspended or held, bossed/knobbed gongs which act as drone without any accompanying melodic instrument.