In the 1790s, the son of an aristocratic white father and a black slave woman became a charismatic French general who for a time rivaled Napoleon himself, and afterward languished in an Italian dungeon. His story inspired the novel “The Count of Monte Cristo,” written by his son, Alexandre Dumas, who also drew upon his father’s adventures in “The Three Musketeers.” Posterity remembers this son as Dumaspère, to distinguish him from Alexandre Dumas fils, also a writer, whose novel “La Dame aux Camélias” was the source for Verdi’s “La Traviata.” But the general was the first of the three Alexandres (he preferred to be known as Alex), and in “The Black Count,” Tom ­Reiss, the author of “The Orientalist,” has recovered this fascinating story with a richly imaginative biography. 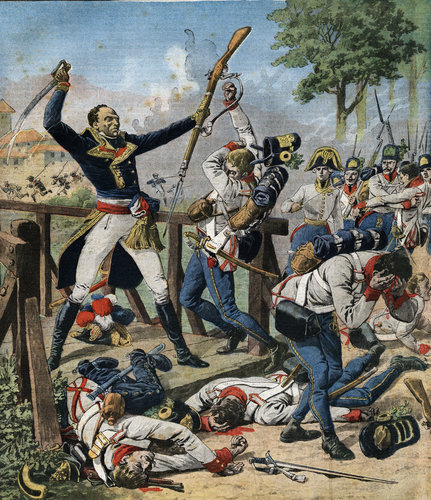 Despite Reiss’s extensive research, the count remains a somewhat remote figure, since his contemporaries usually described him in conventional superlatives. The chief source of information is a highly romanticized memoir by his son, who was not yet 4 when he died, and who idealized him, in Reiss’s words, as “the purest, noblest man who ever lived.” Still, such language seems deserved. General Dumas was majestically tall (“his proportions were those of a Greek hero”), a crack swordsman and horseman (“looking like a centaur”), utterly fearless, generous to subordinates and a loving husband and father. He was also exceptionally good-looking, though the portraits that survive are less spectacular than the majestic Adonis depicted in the book’s cover illustration.

Dumas was born in 1762 at the western end of Saint-Domingue, the colony that is now Haiti. Remarkably, the French Empire guaranteed protection and opportunities to people of mixed race, and when the boy’s father brought him to France at the age of 14 he was able to receive a first-rate education and later to join the army. He never cared much for his feckless father, however, and took the name Dumas from his slave mother, about whom very little is known.

Still a young private in the army, Dumas fell in love and proposed marriage to Marie-Louise Labouret, his landlord’s daughter. It was an enduring love match; years later he wrote to her from the wars, “I am and will always be your best friend.” Marie-Louise’s father asked the couple to wait to marry until Dumas was promoted to sergeant. They didn’t have long to wait. The French Revolution had erupted, proclaiming an ideal of égalité, and he shot up through the ranks.

This was a time of chaos throughout Europe, and Dumas got to experience the upheavals firsthand. Assigned to the Army of the Alps, he fought a series of difficult winter engagements in which his troops sometimes foundered in deep snow and at other times skidded on icy cliffs. In addition to being a gifted organizer and inspired tactician, he was indomitable in hand-to-hand combat.

But back in Paris, his civilian superiors kept complaining that he wasn’t accomplishing enough, and when the infamous Committee of Public Safety launched the Reign of Terror, he was charged with defeatism and incivisme, “lack of civic consciousness.” If anyone should have been safe from such an accusation it was Dumas, whose devotion to the principles of the revolution never wavered. But he was summoned to Paris possibly to face execution. He survived only because ­Robespierre fell and the Terror abruptly ended.

Next, Dumas was sent to the Vendée region in western France, where the army had punished peasant resistance to the regime by massacring many thousands of people. Acting decisively, he succeeded in restoring order. Here and throughout his career he flouted military custom by forbidding his men to pillage.

And then it was on to Italy. Promoted by now to the rank of general, Dumas battled the Austrians, who called him the Black Devil. On one memorable occasion he defended a mountain bridge against heavy odds, and a companion remembered seeing him “lift his saber, as a thresher lifts his flail, and each time the sword was lowered a man fell.”

Meanwhile Napoleon, seven years his junior, was rising rapidly in prestige, and was hostile to potential rivals. Dumas’s gifts as a soldier were obvious, and Napoleon would continue to make use of him, but always with jealousy and suspicion. It didn’t help that Napoleon was skinny in those days and that his nose barely came up to Dumas’s magnificent chest.

In 1798 Napoleon started a megalomaniac campaign in the Middle East, intending to conquer Egypt and then to go on to British India. There were never enough supplies, the heat was intolerable and thousands of soldiers were killed or died of disease. In Egypt, Dumas was now supreme cavalry commander of the Army of the Orient, and as usual he distinguished himself in battle. Reiss’s narrative of the campaign is especially spirited, and along the way he treats us to a wealth of incidental information, for instance about the Mameluke warriors who came to Egypt from the Caucasus and bequeathed pale skin and blue eyes to some Egyptian families.

Though the French managed to rule Egypt for several years, there were repeated setbacks, most notably Lord Nelson’s naval victory in the Battle of the Nile in 1798, which put an end to thoughts of conquering India. Napoleon abruptly departed for France, leaving his bedraggled army behind. Dumas then chartered a vessel that proved to be frighteningly leaky. It stayed afloat only after his shipmates threw their cannons overboard, as well as 4,000 pounds of coffee that he had been planning to sell in France, along with nine Arabian horses.

When the men got as far as Italy they put ashore at Taranto on the southern coast, expecting to be welcomed by a recently established republic there. It turned out, however, that Neapolitan monarchists had retaken Taranto, and Dumas was imprisoned in its fortress by a reactionary gang that called itself the Holy Faith Army. He spent two miserable years in the dungeon, unable to get anyone in authority to address his case, and after falling gravely ill he became convinced that the physician attending him was administering poison.

Back home, Marie-Louise kept pestering the French authorities to locate her husband, which they finally did, and they negotiated his release. By now he was a broken man, and anyway his military career was over, since Napoleon had become first consul — effectively dictator. Shortly after his release from prison, Dumas wrote a bitter account of his captivity that would later inspire his son’s tale of the ordeal of Edmond Dantès in “The Count of Monte Cristo.” Alex Dumas, who was never officially a count because he didn’t claim his father’s title, died of cancer in 1806 at the age of 43.

In 1802 Marie-Louise gave birth to their third and last child, Alexandre, Dumas père. That Alexandre was a figure of vast appetite and incredible energy, but thanks to Reiss we now know that Dumas grandpère was even more interesting. A statue in the general’s honor once stood in the Place Malesherbes in Paris, but it was destroyed by the Nazis since it celebrated a man of mixed race. Reiss concludes by remarking, “There is still no monument in France commemorating the life of General Alexandre Dumas.”