Mass hysteria always makes perfect sense when we are trapped in it. It can take decades — or even longer — before the crazed irrationality of a particular episode shows itself for what it was. That realization comes through with considerable force in a new documentary about the case of the five black and Hispanic teenagers who were wrongly convicted in the beating and rape of a young, white jogger in Central Park in the spring of 1989. 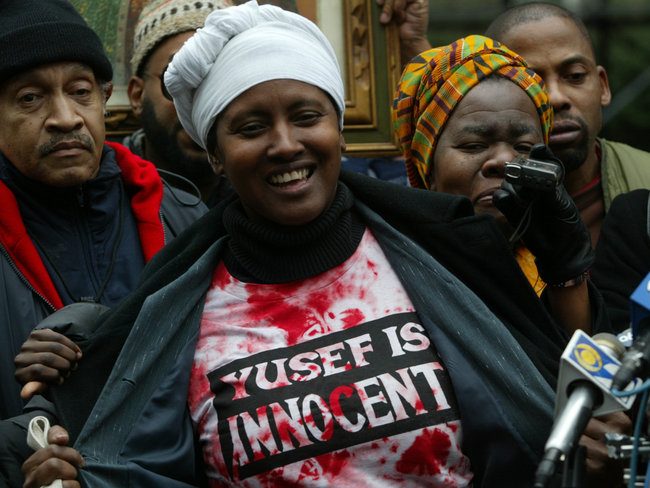 Sharonne Salaam in 2002, when the conviction of her son Yusef in the 1989 Central Park jogger case was overturned.

The film, written and produced by the documentarian Ken Burns, with his daughter, Sarah Burns, and her husband, David McMahon, offers a matter-of-fact but profoundly disturbing depiction of the forces that led citizens, politicians, the media and the criminal justice system to brush past yawning gaps in the evidence in the case. The five teenagers, aged 14 to 16, were convicted — based on confessions they say were coerced — in what former Mayor Ed Koch describes in the film as “the crime of the century.”

The convictions were overturned in 2002, after a serial rapist and murderer, who had staged a similar attack in the park just 48 hours before the one on the jogger, stepped forward to admit his crime, saying that he had acted alone.

An exhaustive investigation by the Manhattan district attorney’s office corroborated the man’s story — noting that his DNA had been found at the scene and that there was no physical evidence to tie the five teenagers to the very bloody crime scene. The investigation report, which recommended that the court overturn the convictions, seemed to suggest that the five should never have been indicted at all. But by that time, Kharey Wise, Kevin Richardson, Antron McCray, Yusef Salaam and Raymond Santana had completed their sentences and been robbed of their young lives.

The film scarcely mentions the pending federal lawsuit in which the five men and their families are seeking $50 million each in damages. But lawyers for the city have subpoenaed raw footage and outtakes from the film, “The Central Park Five,” arguing that the material is crucial to its ability to defend itself. The subpoena fight shows that the past, as Faulkner pointed out, is never really past.

My job as an assistant metropolitan editor for The Times in the late 1980s gave me a close vantage point on the events that unfolded in the aftermath of the attack. But it was only with the documentary — and the distance of time — that I gained perspective on the civic turmoil of the period and the symbolic role that the young suspects played.

Back then, New York was still reeling from its brush with bankruptcy, the deadly crack wars were raging, and one could drive for blocks and blocks through terrifying landscapes of bombed out buildings in poor neighborhoods.

In the public mind, a large group of teenagers who had roamed the park the evening of the jogger attack, chucking rocks at a cab and assaulting runners, embodied the decline of civilized society itself. The five who were charged with the jogger case were depicted as “animals,” “savages” and especially “wolves” as they headed to convictions that were almost assured before the first juror was called. Never mind the absence of physical evidence, or the timeline analysis suggesting that the group was probably elsewhere in the park when the attack on the jogger took place. Or confessions described in the district attorney’s investigation as differing “from one another on the specific details of virtually every major aspect of the crime — who initiated the attack, who knocked the victim down, who undressed her, who struck her, who held her, who raped her, what weapons were used in the course of the assault and when in the sequence of events the attack took place.”

The old interrogation footage of the frightened teenagers who confessed, shown in “The Central Park Five,” stands in sharp contrast to the “wolves” that were put forward to us in 1989. We see a baby-faced 14-year-old Raymond Santana mumbling out a confession, which he now says he made up in an attempt to satisfy the police, who he claimed promised to let him go home if only he provided a story. We see the special-education student, Kharey Wise, who was 16 but whose mental abilities were younger than his years. He is overwhelmed when shown a picture of the victim’s injuries and almost swooning with gratitude when someone hands him a can of soda.

By the time the videotaped confessions were taken, the defendants, their lawyers say, had endured lengthy interrogations and been subjected to coercive and deceptive interrogation techniques, including force and trickery, sleep deprivation and isolation from their families. The complaint further asserts that the boys were told that they could go home if they provided statements placing themselves at the scene and incriminating others.

Looking back at their younger selves, the men speak of loss and of standing at a kind of remove from the lives they are trying to live. As Mr. Wise, who served 13 years, puts it: “You can forgive but you won’t forget. You won’t forget what you done lost. No money could bring that time back. No money could bring the life that was missing or the time that was taken away.”

For African-Americans, many hurdles in seeking mental health care