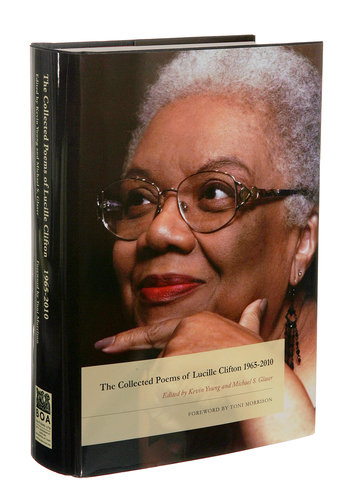 In her introduction to the excellent 1973 anthology “The Poetry of Black America,” Gwendolyn Brooks suggested that there were essentially two varieties of young black poets then extant. One type was made up of those who worked from what she called “stormy resentments” and “may have begun their careers with columns of expletives” or exhortations to “kill the honky kill the honky kill the honky.”

Those in the other type, Brooks said, “believe tricks should be avoided, believe that blackness, by contemporary black definition, is straightforward and substantial, clean-lined, even spare.”

There’s little debate about which side of this divide the poet Lucille Clifton, who died in 2010 at the age of 73, fell on. Her verse was spare, plainspoken and shorn of rhyme, so much so that when she placed the words “salt” and “fault” together in one poem in the late 1980s, she was moved to warn readers of this potential speed bump by titling it “Poem With Rhyme in It.”

A new book, “The Collected Poems of Lucille Clifton, 1965-2010,” gathers all the poems that Clifton published in book form in her lifetime, and includes scatterings of unpublished work. Some of this material she may have wished to keep private.

In an afterword, one of the book’s editors, the poet Kevin Young, notes that a few works were fished from a file that Clifton had titled “Unpublished Poems,” then retitled “Old Poems and Ones that May Not Be Poems at all and Maybe should be thrown away One Day.” She finally retitled the file “Bad Poems.” Mr. Young and his co-editor, Michael S. Glaser, were correct to include this material, especially Clifton’s unpublished early work from the mid-1960s. Clifton was most often at her best, to my ear at any rate, in the first decade of her career, and her debut collection, “Good Times” (1969), is a near masterpiece.

One early and previously unpublished poem here, “Sunday Dinner,” presages the high points in “Good Times.” It reads in its entirety:

in a fantastic time

the truth of potatoes

steaming the panes and

gold and predictable as

It’s the word “certainty” that nails this poem to the kitchen door. It suggests a fundamental loneliness and lack of certainty. The poem is a shy cri de coeur.

Clifton won a National Book Award in 2000 for her collection “Blessing the Boats: New and Selected Poems, 1988-2000.” By then our sense of her work had changed somewhat. Her poems had become more celebratory and gauzy and nurturing; there were perhaps too many about dreams or moonchildren, and there was too much greeting card verse meant to be declaimed on friends’ birthdays or anniversaries. Some of this material bordered on the fatuous.

Yet it’s tonic to read Toni Morrison, in her introduction to these collected poems, slap down this critique of Clifton’s work. “To me she is not the big mama/big sister of racial reassurance and self-empowerment,” Ms. Morrison declares. “I read her skill as that emanating from an astute, profound intellect.”

Ms. Morrison is dead-on about Clifton’s wiliness and brains, but you sometimes have to look for these qualities in her work. They are not apparent in every poem, which is why this very large collected volume does not serve her particularly well. A future, thinner, selected volume will better make an indelible claim for her greatness. It’s joyful work, however, compiling your own mental list of the material you’d like to see in that utopian Lucille Clifton anthology. How about the poem where she walks down a supermarket aisle with Aunt Jemima and Uncle Ben? Or the one called “To My Last Period,” which begins: “well girl, goodbye/after thirty-eight years”?

Or the sly poem in which she remarks on the difference between Eddie Murphy and Richard Pryor:

eddie, he a young blood

he see something funny

in everythin ol rich been around a long time

he know ain’t nothing

Or the one called “Wishes for Sons,” in which she memorably declares: “I wish them cramps./i wish them a strange town/and the last tampon/i wish them no 7-11.”

Clifton was born polydactyl, with 12 fingers, and much of her finest work pays close attention to the rhythms and ravages of her own body. In one of the most shocking and potent poems in the English language, called “Donor,” Clifton speaks to the daughter who is about to give her a kidney. It begins:

when they tell me that my body

i think of thirty years ago

and the hangers i shoved inside

hard trying not to have you.

In Lucille Clifton’s best stuff, as she writes in a poem called “The Death of Thelma Sayles,”

i pull my heart out of my pocket