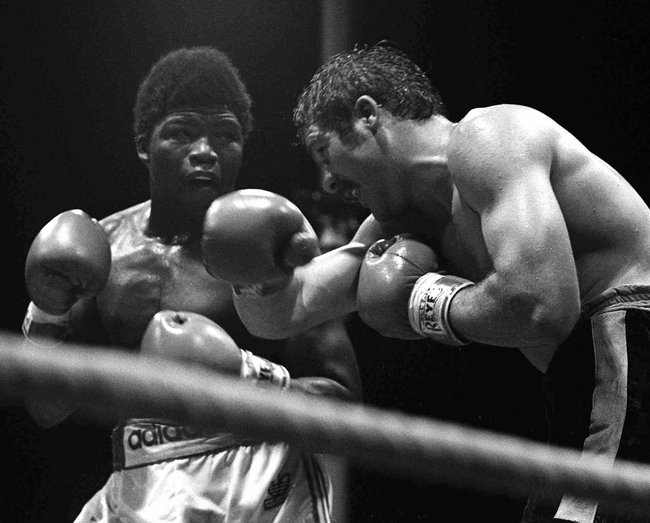 South Africa wanted a 1979 heavyweight bout between John Tate, left, and Gerrie Coetzee so badly it allowed blacks and whites to sit together.

For a full minute, neither boxer threw a punch. Instead, Gerrie Coetzee tried to rattle John Tate with a barrage of taunts.

It was Oct. 20, 1979, and the World Boxing Association’s heavyweight title fight was taking place in South Africa. At the height of apartheid, an African-American, Tate, and a white Afrikaner, Coetzee, were competing for the title vacated by Muhammad Ali when he retired.

This was the first time black South Africans were allowed into Loftus Versfeld, Pretoria’s temple of white sport, for anything other than cleaning the stands or tending the grass. They were among 81,000 mostly white spectators, the biggest crowd for a boxing event in more than 50 years.

I was 6 and could not watch the fight live on television in South Africa. Although the country wanted the fight so badly that it agreed to change the apartheid laws to allow blacks and whites to sit together, the national broadcaster decided not to show it.

The match was of such national importance, it attracted Prime Minister P. W. Botha, his entire cabinet, Miss World and 1,000 police officers, but not the money for live broadcast rights.

For the first three rounds, there was little danger for either boxer. Then, at the end of the fourth, a good left from Coetzee connected with Tate and his legs buckled. The cheering intensified, but Coetzee, called the Bionic Hand after a series of operations left his right in a permanent fist, waited calmly for his opponent to come back to him.

Tate had eliminated Kallie Knoetze, a former police officer who once shot a black teenager, so almost all of white South Africa was behind Coetzee. But not me.

It was from a love of American culture rather than a precocious moral awareness — seeing Tate’s head over the Stars and Stripes on the promotional stickers resonated with my admiration for Superman, American movies and the toys I coveted from the pages of Archie comics.

Coetzee felt the isolation, too.

“South Africa is the other end of the world from the United States, the bottom of Africa, right in the corner of the world,” he once said.

By 1973, Arthur Ashe had made the first high-profile call for a sports boycott against South Africa. When news of the 1976 Soweto uprising reached the world, apartheid could no longer be ignored. Politically and economically isolated, we were excluded from the Olympics, soccer’s World Cup and even netball.

That the fight took place at all was a testament to the pliability of the W.B.A. In 1979, South Africa was the world’s top gold producer. The rand was worth more than the dollar, and the principal dealmakers saw a gold mine of their own.

In my small town in the far north of the country, the prevailing feeling was that the sports boycott was unfair. It was simply political meddling when all we wanted was a chance to show the world what a champion we had in Coetzee.

As he moved in closer to follow up with his bionic right, his foot slipped on the canvas in front of his corner, still damp in patches from an earlier downpour. In Round 7, Coetzee slipped again, to his knees this time, and Tate punched him as he dropped. But Coetzee rose and delivered a firm uppercut to Tate’s jaw.

While white South Africa was behind Coetzee, for black South Africans, the choice was more fraught. At 6 feet 4 inches and as the proud owner of an Olympic bronze medal, Tate was just the guy to symbolically, and not so symbolically, triumph over the white man.

The first problem, though, was that by breaking the sports boycott and entering the country, he had shown a disregard for the plight of black South Africans. Throughout his stay in a mansion in a well-to-do white Johannesburg suburb, Tate refused to express his views on apartheid. The authorities turned a blind eye to his transgression of the Group Areas Act, the law which decreed separate areas for racial groups and restricted entry for nonwhites into white suburbs.

The second problem was that Coetzee was far from an ideal villain. He had spoken out several times against apartheid, perhaps safe in his position as the country’s golden boy.

“Chop wood with him!” Miller called from Tate’s corner.

Tate looked more aggressive with each round, and Coetzee more worn out.

While Coetzee was struggling in Pretoria, the Rev. Jesse Jackson was leading a protest in New York against CBS, the broadcaster of the fight in the United States. The South African authorities had bent over backward to comply with the promoters’ insistence on mixed-race seating. But Jackson said, “The world won’t know it’s for one night only.”

The crowd was almost silent by Round 11, and Tate looked as if he was only beginning. He landed two blows to Coetzee’s jaw, leaving him dazed and weakened.

“Get that cut for apartheid, John!” Miller shouted in the 15th and final round.

Blood was streaming down Coetzee’s cheek from a gash below his left eye. His strength was sapped, and he slipped three more times before the end.

Tate, by contrast, seemed fresh. He harried Coetzee relentlessly, ending with a combination to the head and a cracking right hook. Slowly, Tate had stifled the excitement and expectations of the entire country, earning a unanimous decision.

Everyone went home — whites to the suburbs, blacks to the townships. Tate left with the W.B.A. crown, which he lost five months later. (Coetzee eventually won the title in 1983 and lost it, like Tate, in his first defense.) The Coetzee-Tate fight was finally televised in South Africa three or four days later. Few watched the midweek broadcast because it was old news, and not good news at that. Perhaps that explains why 33 years later, few recall the bout.

Nevertheless, it deserves to be remembered, if not for the boxing, then for the improbability of its taking place and the hypocrisy of an apartheid government hungry for a homegrown champion.?????