A New BBC show has created lifelike models charting the ascent of man, showing in the most forensic detail ever how three of our ancient ancestors would actually have looked when they walked the earth.

While Australopithecus Afarensis was an established walker 3.2 million years ago, it was Homo Erectus that shed his body hair while Neanderthal man was the first metrosexual, the programme’s producers claim. 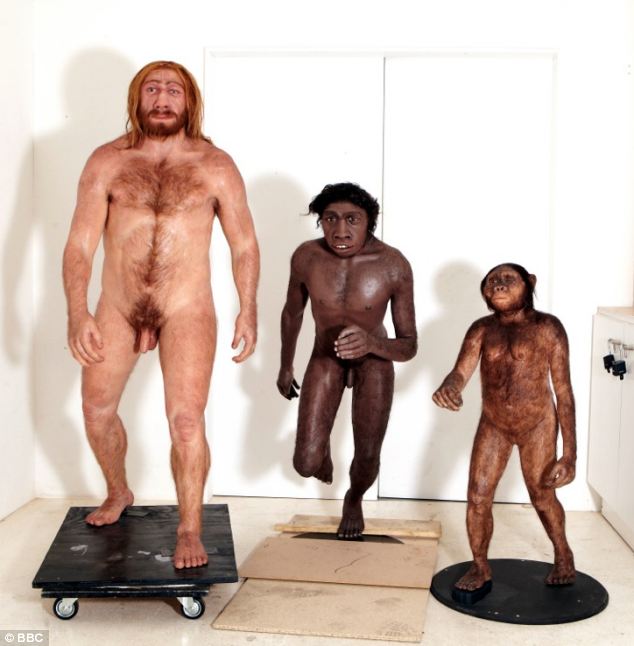 Australopithecus Afarensis, Homo Erectus and Neanderthal man recreated as 3D models for the BBC’s latest show, which airs every night this week. 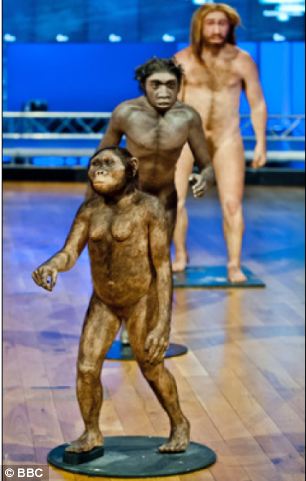 The models as they will be seen on the show

The extraordinary research is unveiled in a new BBC2 series, Prehistoric Autopsy, presented by historians Dr George McGavin and Professor Alice Roberts and screened on consecutive nights this week.

Following the show, the models will be touring museums around the country.

Executive producer Jane Aldous said: ‘When you dig things out of the ground, it’s a bit like Silent Witness.

‘You can tell a lot about a skeleton, if you know how to read it.’

They recreated a life-size skeleton of the three individuals and built up their muscles with modelling clay before wrapping their bodies in fibreglass to create moulds.

Liquid silicon was then poured into the mould to create lifelike skin texture.

Afterwards they added the finishing touches like hair and eyes. 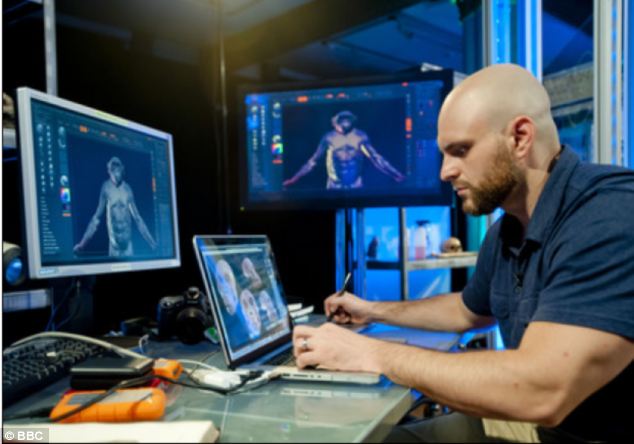 ‘Hopefully this is a novel and fresh way of making evolutionary programming,’ added Ms Aldous, ‘ which will attract more people to it and make it more accessible.

‘It’s a massive period with not much hard and fast evidence.

‘Some of these skeletons were found years ago but the new technology available is now allowing us to find out more about them.’ 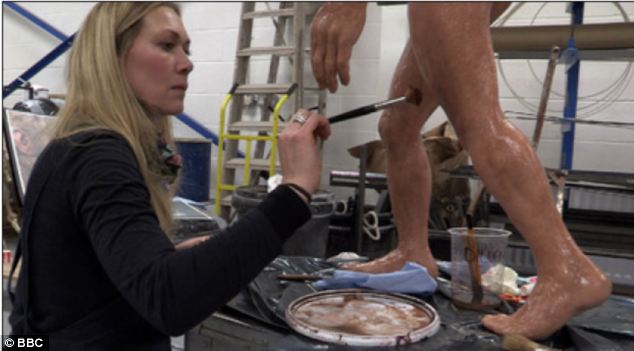 Professor Roberts said: ‘By piecing together how these three moved, how they looked and how similar they were to us today I think we’ve gained a better understanding not only of our family history but what it means to be human.

‘I love the fact that we think of Neanderthals as big game hunters and yet here we are looking at them and saying well actually what’s really shaped their bones is not hunting but making clothes.’

Prehistoric Autopsy begins at 9pm on Monday 22 October on BBC2. 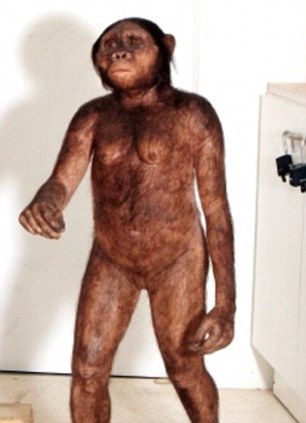 The final model of Lucy, which will be unveiled as part of the show

It was 3.2 million years ago in Africa when Australopithecus Afarensis first walked the earth: scientists based their model on a skeleton discovered in Ethiopia in 1974 by paleoanthropologist Professor

Donald Johanson, who named her after the Beatles son Lucy in the Sky with Diamonds.

They scanned footprint trails from the area to create a 3D image of her foot, which showed she had arches like humans, and built a model of her hands by scanning a replica of her hand using a stereolithography machine.

Scientists have concluded that although Lucy was the size of a toddler – she was only three and a half feet tall – she was in fact a young adult, around 20 years old, because she had wisdom teeth but they were barely worn down. She had short legs, long arms and strong muscles.

It was Lucy who traded life in the trees for life on the ground. This is believed to be because there had been a change in the environment – the thick jungle was being replaced by open savannah so Lucy would have found it easier to walk further and find food.

It was the knee joint that alerted Professor Johanson to the discovery that Lucy was one of the first bipeds.

‘When I put it together and looked at it, I could see the characteristic angle of the shaft that comes with being a bi-ped, walking upright,’ he said.

‘All other mammals on the planet walk on four legs. We walk on only two legs. So to be able to find a bone that testifies to the fact that these creatures, these early humans were walking upright justified its placement on the human family tree rather than the ape tree.’

However the ability to walk came at a price. Lucy’s basin-shaped pelvis, which was modified to enable her to walk and is similar to that of a human, would have made childbearing harder.

Professor Karen Rosenberg, an anthropologist at the University of Delaware, said: ‘Chimpanzees have a pretty easy time giving birth. Their baby’s head is much smaller than the birth canal and seems to go through in a straightforward way without a lot of difficulty.

‘But the modifications that happened because we walk on two legs had taken place by the time of Lucy so her pelvis looks much more similar to a modern human.

‘If we look at the way that modern humans give birth, the fit between the baby’s head and shoulders and the birth canal is quite tight, as lots of people know from personal experience.

It’s like a modern human in that it’s wide from side to side but it has that shape all the way through.

The final model of Homo Erectus, which will be unveiled as part of the show

Lucy’s successor was Homo Erectus, the longest surviving species on the planet and the first of our ancestors to leave Africa around 1.8 million years ago making their way across Asia to Eastern China: at their peak, there were an estimated 125,000 lived around the world.

The scientists modelled him on ‘Nariokotome Boy’, a skeleton, dating from 1.5 million years ago that was discovered near Lake Turkana in Northern Kenya in 1984.

Apart from his head – he has a smaller brain and distinctive face – Nariokotome Boy looks remarkably similar to modern humans, with all the same muscle groups.

After analysing the enamel on his teeth, scientists believe he was eight years old when he died – possibly from an abscess on his jaw, which became infected.

Slim and agile, with a strong back and bottom muscles and long legs, he had a runners’ physique, a necessity in a period where he would have had to cover long distances in order to hunt his prey.

In fact he may well have been one of the world’s first long-distance runners – examination of his body shows that his vestibulo cochlear apparatus was similar to that of a human, enabling him to maintain eye contact when he moved his head.

Research also shows that Homo Erectus was the first of our ancestors to light fires and cook food: he had a different ribcage, shorter gut and smaller teeth, which suggested that he was eating better quality food.

Until recently scientists believed that humans did not cook until 400,000 years ago but new chemical analysis techniques have put a match to that.

Using electron spin resonance, Dr Anne Skinner, a chemist at Williamstown University, in Massachusetts analysed the burnt fragments of antelope bones found at changes in bone protein of Swartkrans Cave and concluded that they must have been burnt in temperatures higher than 300 degrees Celsius, the temperature of grass fires.

With his larger brain, runners’ physique, better tools and ability to build a fire, Home Erectus was well-equipped to explore the territories outside Africa. But he would have been held back by his body hair.

Scientists believe it was around this time that our ancestors lost their fur: keeping cool in the heat of the African savannah would have been crucial to survival and the loss of body hair would have enabled them to sweat more easily and reflect heat away from the body.

After conducting an experiment between twins – one clothed to resemble fur and the other topless – Professor Peter Wheeler, dean at Liverpool’s John Moores Univerisity concluded: ‘There are good reasons to think it was advantageous for homo erectus not to be hairy.

‘The loss of his body hair means that heat will flow through his body more easily out into the environment.

‘The second advantage is the loss of body hair makes sweating much more effective.

‘When the sweat is secreted onto the skin’s surface, the increased airflow over the skin means that the sweat is evaporated at a greater rate.’ 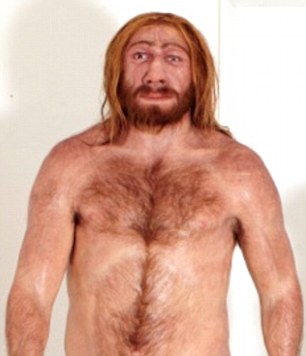 The final model of Neanderthal Man, which will be unveiled as part of the show

Our final predecessor was Neanderthal Man, who lived on earth until 30,000 years ago and may have even bred with modern humans – all of us have some Neanderthal DNA which suggests that we didn’t just share a common ancestor but inter-bred.

This time the model makers used a skeleton dating from 70,000 years ago, which was found in a cave in France in 1909 and is known as La Ferrassie 1.

He was between 40 and 55 years old and five feet six inches tall but was much stronger than modern humans.

Analysing the shape of the bones, scientists have concluded that Neanderthals probably stabbed their prey such as Woolly Mammoths rather than throwing spears: La Ferrassie 1 had an oval humorous whereas a modern cricketer, who throws a lot of balls, has a more circular one.

They also believe that the macho Neanderthal would have spent more energy designing their wardrobe than hunting as his right arm was substantially larger and more robust than his left.

Dr Colin Shaw, an anthropologist at Cambridge University, said: ‘Neanderthals lived in a cold climate. They needed to stay warmer than just their physiology would allow for.

‘So clothing might have been part of the equation.

‘To produce a hide takes a great deal of processing: it takes approximately eight hours of scraping per hide, you need five to six hides and each individual needs a new suit per year.

‘If one person was doing it for their family they could remain busy scraping for half a year. That might explain the right side dominance and the massive asymmetry you see in Neanderthals.’

Scientists also believe that Neanderthal man was much more cultured than previously thought. A painted shell, dating from 37,000 years ago, before the arrival of modern man, bears a hole in the middle, which suggests it was a pendant.

BBC Documentary on How Africans Populated the Earth