In March and April 1862, a handful of photographers, some employed by Mathew Brady, set out from Washington to record the scenes surrounding the Army of the Potomac and to view the destruction left in Northern Virginia in the wake of the Confederate retreat to Richmond.
One of their first photographs, from March 1862, was entitled “Ruins at Manassas Junction.” In his 1866 “Photographic Sketch Book of the Civil War,” one of the photographers, Alexander Gardner, wrote that the junction was “one wide area of desolation, but a small portion of which can be represented in a single photograph.”
The desolation captured by the photograph drove home a new reality about the war: above all, that it would be fought, and possibly won or lost, on the railroads, and that the new railroads could be destroyed as easily as they had been built. One of the reasons the Battle of Bull Run (known as the Battle of Manassas in the South) took place where it did was the presence of a railroad junction nearby. Small towns like Manassas and Corinth, Miss., where little other than railroad lines met, had assumed an importance out of proportion to their history and population.
The majority of Americans, however, would never see the photograph: rather, they saw an engraved interpretation of it, originally published in Harper’s Weekly on Sept. 13, 1862, from a sketch drawn by Alfred R. Waud. Actually, it wasn’t an exact copy, and what was left out was instructive. Obvious in the photograph, but missing from the engraving, were several former slaves and black railroad workers.
These men, probably former slaves who worked on the Orange and Alexandria Railroad, weren’t incidental: early in the war, black railroad workers, both free Northern blacks and Southern slaves, played a critical role in building and maintaining the rail networks. At the same time, the strategic importance of the railroads meant that these black workers would help determine the success of the Union Army, even as the railroads helped determine their future as free men. Why, then, were they left out? 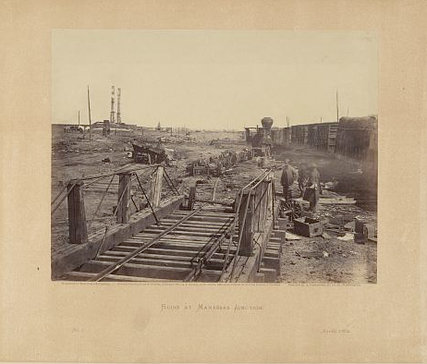 Library of CongressRuins at Manassas Junction, by Andrew Gardner. CLICK TO ENLARGE

Photos depict the 1950’s lives of slave descendants living on a remote island cut off from the U.S. mainland