‘A Great Fight for Freedom’

The overcast skies of Jan. 1, 1863, ushered in the era of emancipation across the Kansas prairie. The absence of sunshine, though, did not dampen the spirits of the men of the First Kansas Colored Infantry at their camp at Fort Scott. That afternoon they celebrated the issuance of President Abraham Lincoln’s Emancipation Proclamation in what an eyewitness described as the old-fashioned Southern style: barbecue and speechmaking.
Three flags, all sewn by women of color, floated above the gathering of about 500 people. The festivities commenced with a performance of “The Star-Spangled Banner,” and everyone joined in the chorus. Then, the soldiers sat down at tables arranged in a large rectangle outside the regimental headquarters. The men feasted on roasted ox, hogs and chickens, and stuffed themselves with bread, cakes and other delicacies. Regimental officers and special guests sat at a separate reserved table.
After dinner, the men were marched before their officers, and listened to speeches by their colonel and others. An observer declared the remarks of one black captain to be the most original of the day for their humor and earnestness. 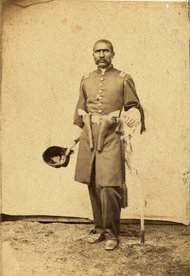 Collection of the Kansas State Historical Society
William Dominick Matthews pictured as a first lieutenant, circa 1865 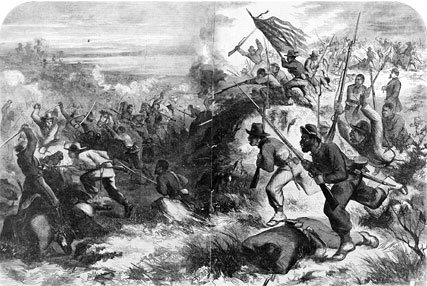 Library of CongressThe March 14, 1863, issue of Harper’s Weekly magazine included an article about the fight at Island Mound and this Thomas Nast illustration titled “A Negro Regiment in Action.”

In mid-January 1863, about two weeks after the Emancipation Day barbecue, the men formally mustered — without Matthews. The officer assigned to muster him in declined to do so, he explained, because he lacked the authority to enroll a person of African descent as a company officer. The captaincy instead went to a white man.
A distraught and disappointed Matthews worried about the impact of the decision on his recruits and fired off a letter of protest to Senator Lane. Outraged friends worked military and political channels on his behalf. But these efforts failed to reverse the decision.
Matthews returned to Leavenworth. After stints as a policeman and an army recruiter, he signed up men for the Independent Battery, United States Colored Light Artillery.
In February 1865, with the end of the war clearly in sight, attitudes towards black officers had shifted slightly in their favor. Matthews mustered in as a lieutenant and served with distinction. One of his superiors praised him: “You have been a model of proper discipline and subordination, strictly attentive to duty, promptly obedient to orders, and acting with a wise discretion in all matters requiring the exercise of your individual judgment.”
Matthews mustered out with his comrades in October 1865 and returned to his home and wife, Fanny, whom he married shortly before he enlisted in the artillery. They raised four children who lived to maturity.
Matthews became an influential figure in politics as a member of the Kansas Republican Central Committee. He died in 1906 at age 78.

The End of the Nightstick: Confronting Police Brutality in Chicago (1994 Documentary)