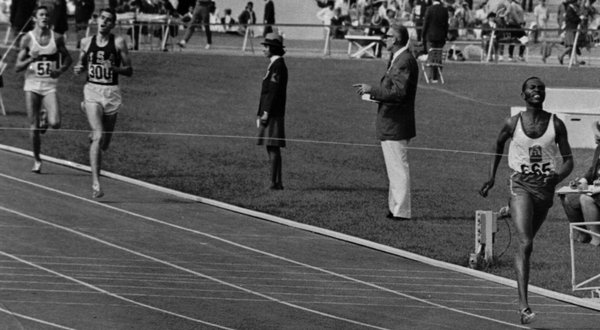 Kip Keino beat the favored Jim Ryun in the Olympic 1,500 meters in 1968, the first chapter in Kenya’s success story in distance running.

In the fall of 1968, I was a college freshman on a football scholarship at Morgan State in Baltimore; Kevin Thompson was a sixth grader living in Harlem. Despite our age difference, we each remember the Mexico City Olympics and the polarizing, often bloody events leading to them.
Dr. Martin Luther King Jr. was assassinated that April, and Robert F. Kennedy in June. Russia invaded Czechoslovakia in August. Then, just after I left Chicago for Baltimore, the Chicago police, under the direction of Mayor Richard J. Daley, routed demonstrators at the Democratic National Convention.
Before the Olympics were in full swing, Mexico City was engulfed by violent confrontations between student demonstrators and the police. Revolt, revolution and resistance were in the air, and the Games were not spared.
The Olympic moment that crystallized this tumultuous time took place on Oct. 16, 1968, when the American sprinters Tommie Smith and John Carlos raised black-gloved clenched fists on the medal stand as the national anthem was played in a dramatic protest. The spectacle came to be cast and marginalized as strictly an expression of black power.
In fact, what drove Smith and Carlos to demonstrate was a broader concern for human rights and human freedom, with an emphasis on the plight of African-Americans.
Smith once said: “Because we were two young black athletes, they wanted to tie us to the Panthers, the Patty Hearst kidnapping,” which happened more than five years later. “It got completely blown out of proportion. It wasn’t that. It was about athletes who felt the need for change.”
To this day, that moment still symbolizes the convergence of sports and politics.
Last week, I ran into Thompson, an assistant track coach at Cornell for 11 years, after a screening of the PBS documentary “Jesse Owens.” He reminded me of a moment that was as revolutionary as the Smith-Carlos demonstration. It took place on the track at Estadio Azteca in Mexico City, when 27-year-old Kip Keino of Kenya upset the heavily favored Jim Ryun to win the 1,500 meters. How could I forget?
Keino won by 20 meters, the widest margin of victory in that event in Olympic history.
“My older brother and I were watching it and we were going crazy,” Thompson said. “Jim Ryun at the time was the world-record holder and the golden boy. It would be the equivalent of an African guy coming here and beating Michael Phelps in a couple races. He broke all of the stereotypes.”
The prevailing wisdom was that middle- and long-distance running was a cornerstone of Anglo-Saxon athletic dominance. The sprints, so the stereotype went, required only raw natural talent, but distance races were cerebral and required grit and stamina, focus and organization. What impressed the 10-year-old Thompson as much as the victory was Keino’s show of compassion, not simply sportsmanship, toward Ryun, who was devastated by the loss.
“I became fascinated with this person who showed his talent but in victory was so gracious to Ryun,” Thompson said. “They resonated with me over the years. As I was growing up, I modeled my life after that.”
In 2005, Thompson took his family on a trip to Kenya. He said he wanted his daughters, especially the oldest, Rei, who was about to attend Princeton, to see “how some young ladies in Africa live.”
They visited Eldoret, the area that has produced many of the great Kenyan runners. That is where they met Keino, who insisted that Thompson and his family stay in his home.
During their visit, Thompson and his wife, Michelle, helped Keino, whose parents died when he was young, establish a foundation that would focus on providing care for orphaned children.
Keino has built schools, including Kip Keino High School in Eldoret that opened in 2010. A stadium there also bears his name.
Thompson eventually began his own foundation, Cross World Africa, which provides African youth with educational opportunities in the United States and other services, and supports cross-cultural exchange.
“Do you know how many thousands of great athletes there are in Kenya who would be amazing N.C.A.A. champions but will never get an opportunity to showcase their talents?” Thompson said. “What Kip Keino represents is that hope that anything is possible.”
Keino followed his 1968 performance with a gold medal in the 3,000-meter steeplechase and a silver medal in the 1,500 at the 1972 Munich Games. To the world, Keino’s enduring legacy is the growth of Kenyan runners as a dominant force in middle- and long-distance running. At the 2008 Beijing Games, Kenyan runners won six gold medals: in the men’s and women’s 800 and 1,500, the men’s 3,000 steeplechase and the men’s marathon. Last Thursday in London, Kenya’s David Rudisha set a world record in winning Olympic gold in the men’s 800.
“He got them to believe that you can be the best, you are the best,” Thompson said of Keino. “It just makes me think that it’s important that we continue to build, fight the struggle and know that anything is possible.”
The bold pose by Smith and Carlos in 1968 illuminated the power of a silent but well-timed demonstration.
For a generation of young people in Africa and the United States, Keino’s victory over Ryun in 1968 wiped out barriers and opened the door to unlimited possibilities.

Clarence Clemons dead at age of 69