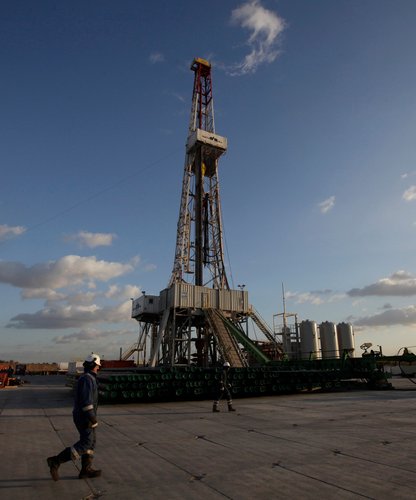 Out of Africa (and Elsewhere): More Fossil Fuels

THE world’s largest energy companies have big plans for Mozambique.

Until recently, the East African country was better known for its long civil war, and had few energy resources compared with regional heavy-hitters like Nigeria and Angola.

But in the last 10 years, companies like Exxon Mobil, the BG Group of Britain and Eni of Italy have used the latest technologies, including advances in deep-sea drilling, to find new natural gas resources that are turning Mozambique into the center of an energy boom.

Up and down the country’s shoreline, Western energy companies, as well as a number of Asian competitors, are drilling wells thousands of feet below the Indian Ocean in hopes of striking it rich. The rewards could be huge. Mozambique may have more deposits of natural gas — used in everything from manufacturing to electricity generation — than the European energy giant Norway.

The East African country is not alone in its newfound energy wealth. Countries like Tanzania and Kenya also are attracting billions of dollars in investment from the world’s largest energy companies as they search for new oil and gas reserves.

“Africa will be the backbone of our production and growth in the next 10 years,” Paolo Scaroni, chief executive of Italian energy giant Eni, told investors last month in London.

In total, the Italian company expects to spend $50 billion to develop natural gas projects off the coast of Mozambique. While production may not start until the end of the decade, the energy firm has designated the new reserves for customers in fast-growing Asian markets like India and China.

Other companies, including Anadarko Petroleum of Texas, also have multibillion-dollar plans for such new African oil and gas finds. Most, too, expect to sell the energy to emerging economies hungry to drive domestic growth.

The quickening pace of exploration in East Africa is part of a wider shake-up in the global energy industry as it scrambles to adapt to a series of major changes. Those range from the nuclear disaster in Japan last year, to slashed subsidies for alternative energy amid Europe’s economic crisis, to a boom in unconventional fossil fuels like shale gas that has spread across continents.

The changes have been particularly drastic in fast-growing China, now the world’s largest energy user and emitter of carbon dioxide. Since opening its economy over three decades ago, the Asian giant has become an insatiable consumer of natural resources. The country still relies predominantly on dirty coal for its electricity, but has fast-tracked oil production, as well as newer technologies like shale gas, and hydroelectricand wind power, to maintain its high levels of domestic growth.

With demand from emerging economies continuing apace, the quest for new fossil fuels is opening up unexplored territories for production. That may help to offset the effect of rising oil prices, which have reached almost record highs.

“The demand from billions of people worldwide to consume energy isn’t slowing down,” said Adi Karev, the global head of the oil and gas practice at the consultancy Deloitte in Hong Kong. “Companies’ ability to find new energy reserves, especially in remote locations, is altering the global market.”

The opportunities are welcome in more ways than one. The new discoveries, including the so-called tar sands of Canada, are allowing Western companies like Royal Dutch Shell and BP to diversify and safeguard future production. State-owned firms like Sinopec of China and Gazprom of Russia have slowly taken over production of their domestic reserves, leaving them in control of roughly 85 percent of the world’s oil resources, according to the Energy Information Administration.

The discoveries also are helping countries from the United States to Romania to decrease their dependence on foreign energy imports as well as generate tax revenue and employment.

Poland presents a case in point. Since 2009, Chevron and other Western energy giants have been exploring there for shale gas, using many of the techniques pioneered in the United States. The new energy resources could have a major effect on Poland, which currently imports more than 80 percent of its natural gas from Russia, its once dominant neighbor. The potential reserves may provide Poland with enough gas for more than 50 years, according to the country’s national geological institute.

“There’s a real desire in Poland to build their own natural gas supplies,” said Ian MacDonald, Chevron’s general manager for business development and transportation. “They recognize that there’s a national interest.”

So far, the American energy company has been drilling test wells to figure out how much shale gas can be extracted. Chevron has permits to explore more than one million acres in the southeast of Poland. It expects to have a clear picture of the potential size of the region’s energy reserves by the end of next year.

All may not go smoothly. Europe’s shale gas industry is not as developed as that of the United States, so finding the right drilling equipment and qualified work force could limit production.

Public perception may prove a problem, too. This year, Bulgaria canceled drilling permits for Chevron, and banned the controversial drilling technology known as hydraulic fracturing, or fracking, which some environmental advocates have linked to the contamination of drinking water. France also prohibited the technique last year.

“We’re working with governments and communities to explain what we’re doing,” Mr. MacDonald said. “Shale gas has the potential to be an enormous economic benefit.”

The emerging fossil fuel renaissance, however, has not been good news for every energy company. In the alternative sector, wind farms and solar panels now find it that much harder to compete against fossil fuels, given the new oil and gas discoveries. Analysts say electricity from wind farms located off the coasts of Britain and Germany, for example, may cost six times as much compared with power plants that burn coal or natural gas.

“The financial crisis has turned off the government tap for renewables investment,” said Ronan O’Regan, director of renewables and clean technology at PricewaterhouseCoopers in London.

The changing economics are forcing green energy companies to adapt. Faced with falling global prices for wind turbines and solar panels, analysts expect the industry’s largest manufacturers to buy, or merge with, rivals, as they look to strengthen their market positions. Deals are already taking place. Last year, takeovers in the world’s renewables industry totaled $53.5 billion, a 40 percent increase over 2010, according to PricewaterhouseCoopers.

Others are looking for cash-rich investors. In a bizarre twist, traditional oil and gas companies may come to the rescue of many green energy projects. With decades of experience developing resources out at sea, traditional energy companies are focusing their attention on multibillion-dollar plans to build wind farms off the coast of Europe and North America. Over the last 18 months, for example, the Spanish oil company Repsol and its Norwegian rival Statoil have announced investments in offshore wind projects across Northern Europe.

Interest in nuclear power also has waned after last year’s disaster involving the Fukushima Daiichi nuclear power plant in Japan. Before the accident, there were 440 reactors in operation worldwide, with a further 558 plants either under construction or on the drawing board, according to the consultant Capgemini.

Now Japan has shut almost all of its nuclear reactors, and countries like Germany and Italy have either announced plans to close their remaining plants or canceled efforts to build new facilities. Asian countries are building the largest number of new nuclear power plants, though analysts say the pace of construction has slowed by almost a quarter in the last 12 months.

“The development of new plants has slowed down, but India and China remain committed to building new nuclear capacity,” said Colette Lewiner, Capgemini’s global head of utilities, energy and chemicals in Paris.

With the outlook dimming for low-carbon energy sources like nuclear power and renewables, there are growing concerns that efforts to curb global greenhouse gas emissions will fail as countries look to exploit new sources of fossil fuels.

Levels of carbon dioxide, for example, rose 5.9 percent in 2010, the latest figures available, according to the Global Carbon Project, an international collaboration of scientists that tracks the numbers. The increase came despite a slowdown in global manufacturing, as many of the world’s largest economies struggled because of the financial crisis.

With many countries expected to return to growth, the use of fossil fuels — and the resulting emissions — are expected to rise.