For years people have tried to find a slur for white Americans as evocative and offensive as the N-word is for African-Americans. And, frankly, there aren’t many classics to choose from. Honky, whitey, cracker, hillbilly: they all fall flat.
The problem is, “white” refers to so many different types of people that a reference to it as skin color has no negative historical relevance in this country. Sure, calling someone white implies that he or she is a bad dancer, not cool or watches too much “Downton Abbey.” But to find something even close to the power of the N-word you have to use well-known slurs that refer specifically to heritage or race. I’m lucky. I’m half Greek and the only slur I could find about my people was “olive picker,” which, honestly, I think is nice. At least it means I’m employed.
I was thinking about this because I have play, “Honky,” that opened on March 14 at Urban Stages. It’s a dark comedy about a commercial that glorifies black gang violence in an effort to sell basketball shoes to white teens. When a black teenager is murdered for the shoes, the shoe designer, who is black, promises revenge. Meanwhile, the ad writer sees a therapist for his white guilt, which is only amplified when he discovers that the therapist is black. All the characters are then put to the test when a new pill on the market promises to cure racism. 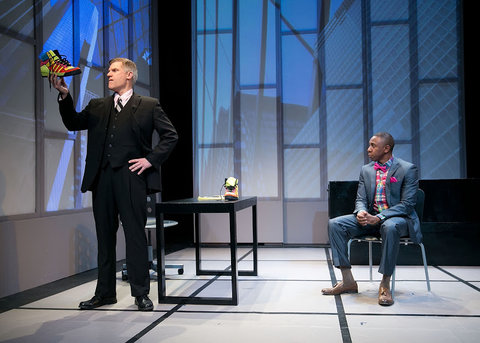 
On the first day of rehearsal, one of the actors asked why I picked the title. The first reason is: the shoe designer’s childhood friends used to call him honky because he grew up in a rich, white neighborhood. The other reason is simpler: the play is a comedy and the word, once considered offensive, is now unmistakably funny. In fact, I don’t think I’ve heard it used without irony since “Death Wish 3.”
But it did make me wonder: is there a way to offend a white person? Obviously you can tell one that he or she kind of reminds you of some actor and then carefully add, “but, you know, not fat.” White people totally hate that. But a single word that can make a white person feel bad simply for being white?
I think there is one. I worked as a writer in advertising for a number of years. It’s a pretty white industry, which is strange when you consider how often it markets to a non-white demographic. Yet when a room full of white people have to talk about their target audience they often don’t know how to do it without saying something inadvertently offensive.
We’re in a sort of racially awkward phase in this country. We see progress but don’t possess adequate language to help us bridge where we are to where we’re going. The result is we keep falling somewhere in the gap, either because we don’t know the right words to use, or because we think we do. More liberal-minded white people are often so terrified of saying the wrong thing, the wrong way and with the wrong emphasis that they seem to jump from one wet rock to another, twisting and turning to stay upright. And frankly, it’s hilarious. Even when I’m one of them.
What’s really funny is that all of this linguistic contortionism is done to avoid being called the one thing that makes white people sweat bullets — the R-word. No, not Ryan Seacrest. Although that’s also pretty bad.
I mean racist. To hear it, even implied, will make a white person lose sleep. I’m not saying the R-word has anywhere near the cultural significance of the N-word but I think it’s better than honky. Maybe that in itself is a sign of progress.
In my play the racism pill – Driscotol — uses this fear as its primary marketing strategy. In one draft of the play I had written a commercial where Dr. Driscol says to the audience/camera:

“Just one tiny caplet a day and all your hatred, deep-seeded or on-the-surface, will fade away. Or, hey, maybe this doesn’t apply to you. Maybe you’ve never had a racist thought in your life. Well, stop right there! Because studies show that even if you think you’re not racist, you’re racist for thinking you’re not. And that is totally racist.”

While writing the play, I realized that it wasn’t the pill that had to be effective, but merely the implication that taking it would arm you against ever being called a racist. And wouldn’t that be nice? No longer would you have to watch someone offer the awkward defense, “No, it’s cool! I had a black friend once!” But instead, he or she could simply say, “No, it’s cool. I have a note from my doctor.”
I’d love to hear your thoughts on what plays or musicals made you re-examine the issue of race in your own life. Which shows did it with humor and which with drama?
Greg Kalleres has written scripts for the stage, television and radio. His play “Honky” opens tonight at Urban Stages, 259 West 30th Street, Manhattan.