Fewer than 2 percent of the 77,000 members of the United States Chess Federation are masters — and just 13 of them are under the age of 14. 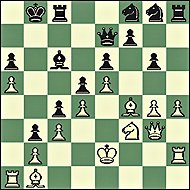 Among that select group of prodigies are three black players from the New York City area — Justus Williams, Joshua Colas and James Black Jr. — who each became masters before their 13th birthdays.

“Masters don’t happen every day, and African-American masters who are 12 never happen,” said Maurice Ashley, 45, the only African-American to earn the top title of grandmaster. “To have three young players do what they have done is something of an amazing curiosity. You normally wouldn’t get something like that in any city of any race.”

The chess federation, the game’s governing body, does not keep records on the ethnicity of its members. But a Web site called the Chess Drum — which chronicles the achievements of black chess players and is run by Daaim Shabazz, an associate professor of business at Florida A&M University — lists 85 African-American masters. Shabazz said many of them no longer compete regularly.

Ashley, who became a master at age 20 and a grandmaster 14 years later, said the rarity was not surprising. “Chess just isn’t that big in the African-American community,” he said.

The chess federation uses a rating system to measure ability based on the results of matches in officially sanctioned events; a player must reach a rating of 2,200 to qualify for master.

In September last year, Justus, who is now 13 and lives in the Bronx, was the first of the three boys to get to 2,200, becoming the youngest black player to obtain the master rank. Joshua, 13, of White Plains, was a few months younger than Justus when he became a master last December. James, 12, of Brooklyn, became a master in July.

The three New Yorkers met several years ago during competitions. Justus has an edge over James, mostly because he won many of their early games, before James caught up. Head to head, James and Joshua each have several wins against the other. Justus and Joshua have rarely competed against each other.

Although they are rivals, the boys are also friends and share a sense that they are role models.

“I think of Justus, me and Josh as pioneers for African-American kids who want to take up chess,” James said.

James’s father, James Black, said he and Justus’s and Joshua’s parents were aware of what their sons represent and “talk about it a great deal,” but tried not to pressure them too much.

The three boys approach the game differently. Justus and Joshua say that James studies the most, and Joshua admits he would rather play than practice. “I like the competition,” he said. “And I like that chess is an art.”

Justus said he is the most aggressive of the three, and he and James agree that Joshua is the most unpredictable. “Joshua likes to change up his openings during tournaments,” Justus said.

Supporting the boys’ interest is not easy financially. Though there are many tournaments in the New York City area, the boys must travel to play in more prestigious competitions, sometimes overseas. This week, they are set to play in the World Youth Chess Championship in Brazil.

They study the game with professional coaches who are grandmasters. The lessons are expensive — $100 an hour is not unusual — and the boys’ families have either found sponsors or have paid for the instruction themselves.

The boys aspire to be a grandmaster by the time they graduate from high school, something that only a few dozen players in the world have done. Ashley, who has met the boys but does not know any of them well, says the obstacles are substantial.

He said several children that he had coached to the junior high school national championships in the early 1990s went on to enroll at elite colleges and then to have successful careers. Along the way, he said, playing chess became less of a priority for them. It is difficult to make a living as a player, he said, adding, “I’ve seen many talented kids go by the wayside.”

Ashley said he could not predict whether the success of Justus, Joshua and James would encourage other young African-Americans to play. Another black teenager, Jehron Bryant, 15, of Valley Stream, N.Y., became a master in September.

“Masters will never be epidemics,” Ashley said. He said the rise of the young masters was a “phenomenon” that was “ worth noting.”

Justus, Joshua and James all played in the Marshall Chess Club Championship in Manhattan last month. Justus and Joshua finished with disappointing results — a common problem for young players, who often lack consistency. But James tied for fifth. In the last round, he beat Yefim Treger, a strong veteran master who is in his 50s.

Treger is a tough opponent because he uses unorthodox openings. James kept his head, however, patiently seizing space and building up his attack until he was able to force through a passed pawn. He wrapped up the game by cornering and checkmating Treger’s king.

An earlier version of this article erroneously stated that there were 47,000 members of the United States Chess Federation.
http://www.nytimes.com/2011/11/13/crosswords/chess/chess-three-young-african-americans-earn-recognition-as-masters.html?_r=4&smid=tw-NytimesKrugman&seid=auto

Man Kills Wife In Car, Then Kills Self As 3 Children Watch

Racist Ad:This is what the corporate world thinks about black males